Natalya Rudenko's ears were still ringing from being shouted at by a father demanding that the Ukrainian-language school she has run for 17 years in Crimea's capital now teach in Russian when local officials turned up at her office to dismiss her.

Their message: Rudenko and her school dedicated to sending students to Ukrainian universities no longer have a place in a society that voted to secede from Ukraine and join Russia last month after Moscow deployed troops across the Black Sea peninsula.

As shocked staff and parents gathered in her office, bringing flowers, the matronly 62-year-old was overcome with emotion: "I built this school from the ground up," she said.

Rudenko's dismissal is part of a colossal reshuffling managed from the Kremlin in the wake of Crimea's annexation to hurriedly remake the Ukrainian region of some 2 million people into a Russian territory populated by Russians.

It is a baffling, monumental task pro-Russian leaders are rushing to complete during a "transition period" that lasts until Jan. 1, 2015 — in many cases cutting corners and dispensing with niceties.

In one early step, they appropriated nearly all local Ukrainian state assets from energy firms to ports, museums and factories and made them nationalized Russian assets.

Courts are paralyzed, the banking network is in disarray as Ukrainian and Western banks pull out, and business ties with the mainland are sundered.

Russian police cars from far-off regions have begun patrolling the region's picturesque roads lined with flowering trees, but it is not clear under what jurisdiction.

"Ukrainian law no longer applies but Russian law has not yet come into force," said Sergei Fominykh, a partner at a local law firm whose court cases have all been suspended pending clarity about the new judicial system. One enterprising Russian firm is advertising its services to help firms adapt to doing business in Russia on a television screen in Crimea's capital Simferopol.

Rudenko's school is the largest of only six teaching in Ukrainian in Crimea.

Natasha Melnichuk is one of many parents who want it to switch to a Russian curriculum as they look to Moscow rather than Kiev for their children's future.

"We did not have a choice but now things are as they are," said the 39-year-old mother of two boys who had been against the region's secession.

"There is no point in them continuing studies in Ukrainian if they will go to university in Russia," she said. Crimea was part of a sovereign Ukraine for 23 years since the breakup of the Soviet Union until a referendum last month that was dismissed as illegitimate by Ukraine and the West. That vote, and the Kremlin's declaration days later that Crimea was now part of Russia, has cast a new political reality that its bureaucrats are now working double-time to render permanent.

On Friday, Crimean legislators adopted a new constitution — the first of what parliamentary speaker Vladimir Konstantinov said was "hundreds of laws" to be passed this year.

"Only 43 days have passed but … we have stepped into a new phase of Crimea's history," Konstantinov told deputies, some of whom had been given Russian passports just two days earlier.

Russia is also getting out its checkbook to bankroll Crimea, earmarking $7 billion in 2014 alone and vowing billions of dollars more investment on everything from higher pensions to a bridge linking the region to Russia.

"With the high level of investment we expect, our economy will become self-sufficient. We do not want to be permanently economically dependent," Rustam Temirgaliyev, Crimea's First Deputy Prime Minister, told Reuters. 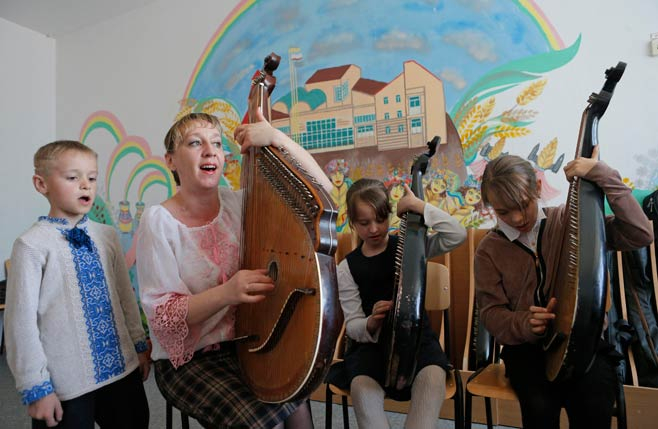 Children playing banduras during a music lesson at a school in Simferopol.

In Simferopol, all of some 15 hotels are full up with men in shiny suits: Russian civil servants, prospecting Russian investors and anxious businessmen from across the peninsula come to lobby the new authorities.

On the whole, people believe they will be better off under Russian rule, but some businesses have been hit hard by the political unrest.

"What business? Business is dying. The rules are changing every day. It is impossible," said the director of one of the vineyards lining the craggy hills along Crimea's coastline, asking not to be named because the firm has been nationalized. Production has ground to a halt at ship builder Zaliv, one of the largest private sector employers. Customers in Norway and the Netherlands cut off new contract negotiations last autumn over the protests in Kiev.

"We are a 100 percent export-oriented company. We do not know what is next for us," company spokeswoman Marina Romanika said.

Companies are scrambling to minimize the impact of being suddenly cut off from markets and supply on the mainland.

For now commercial traffic across the Isthmus of Perekop linking Crimea to Ukraine is still flowing — as are water, gas and electricity supplies from the mainland on which Crimea is dependent. But business leaders do not expect it to last.

"We have to change all our logistics. Ukraine's reaction is unpredictable. We are redirecting everything through Russia," said Alexander Batalin, chairman of Phiolent, which supplies 90 percent of all power tools in Ukraine.

The Simferopol-based firm is a significant player in the local economy with 1,800 employees and a turnover of about 1 billion rubles ($28 million).

Its future is now uncertain. Batalin says he does not yet know who will take control of the more than 50 percent once owned by Ukrainian state.

But like many other pro-Russian businessmen, he expects greater access to markets in Russia and Russian investment will compensate for the potential loss of sales to Ukraine, which made up 35 percent of the company's exports.

"Thanks to the emotional, patriotic awakening in Russia to help Crimea, we are getting access to retail chains there that were closed to us before," he told Reuters.

Most residents of Crimea, once a prestigious holiday destination for imperial Russia and the Soviet Union, hope absorption by Moscow will revive the economy and transform its worn resorts.

"There is no comparison between Russia and Ukraine's financial wealth and size, so of course we are winners," said Yury Malyshchev, 49, an employee at the Artek children's holiday camp, now nationalized by Crimea's Kremlin-backed leaders.

"I pocket 2,000 hryvna ($160) a month. Now I hope for four times that," he said.  In its heyday, the seafront camp was so cutting edge it was used as the set for Soviet science fiction films.

Today, it is mostly in disrepair. Shrubs poke through the cracking cement of a giant empty pool, and a graffiti-covered statue of Lenin dominates the view.

Devoid of children since the start of the political unrest four months ago, Artek now looks particularly forlorn. The camp has racked up 17.5 million rubles ($490,000) in wages arrears in the last two month for its 1,700 employees.

Whether or not to stay here is a tough choice for many whose history and affinity is divided between Crimea and the mainland.