As the U.S. on Tuesday accused Russia of sending "paid operatives" into Ukraine to destabilize the country, Ukrainian authorities said pro-Russian separatists in Lugansk had taken 60 people hostage.

The developments came as the U.S. and Russia were gearing up for talks on the crisis in eastern Ukraine after tensions flared in Donetsk and Kharkiv, with pro-Russian protesters having seized administrative buildings. By Tuesday, police managed to push some of the protesters out in Kharkiv and Donetsk, but Ukraine's security service warned of separatists in Lugansk threatening hostages with weapons and explosives, Reuters reported.

Russia and the West have clashed over the anti-government protests in Ukraine, with the U.S. and the European Union accusing Russia of attempting to destabilize its southern neighbor and possibly occupy some of its eastern regions after it annexed Crimea last month. The Kremlin has denied such intentions, however, arguing that it only sought to protect the interests of Russian speakers and pushing for the federalization of Ukraine.

U.S. Secretary of State John Kerry said Tuesday that it was "clear" that Russian agents had been behind the unrest in eastern Ukraine that has erupted in the last 24 hours and that the Kremlin was engaged in an illegal, illegitimate effort to destabilize the country with paid operatives, Reuters reported.

Russia's actions in eastern Ukraine could be a pretext for military intervention similar to that in Crimea, Kerry said, adding that the U.S. was willing to impose more "tough" sanctions on Russia over Ukraine, possibly targeting the energy, mining and banking industries.

On Monday, Kerry told Russian Foreign Minister Sergei Lavrov in a phone call that any future moves by Moscow to destabilize Ukraine would "incur further costs for Russia." He urged the Kremlin "to publicly disavow the activities of separatists, saboteurs and provocateurs."

Kerry also said that the first round of talks between Ukraine, Russia, the U.S. and the EU on resolving the crisis in Ukraine could take place within 10 days.

Lavrov said that a draft of the new Ukrainian Constitution should be prepared before such negotiations begin, however, because otherwise the country's southeastern regions would have no say in drafting the document. 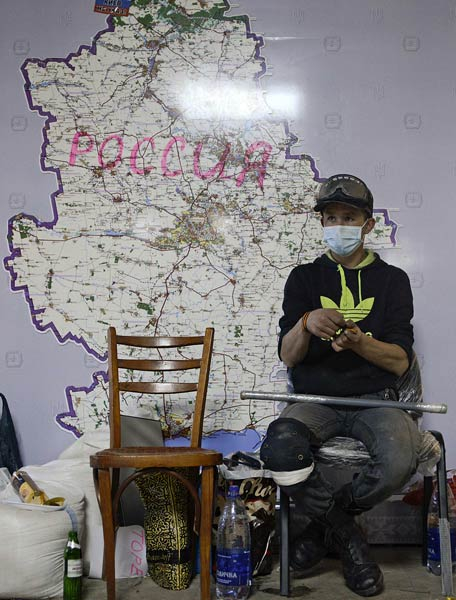 A pro-Russian protester in front of a map of the Donetsk region that has been labeled "Russia" on Tuesday.

"Our American partners are like the pot calling the kettle black," Lavrov said.

Ukraine's Foreign Ministry said Tuesday that it was prepared for talks with Russia, the U.S. and the EU, but it urged the Kremlin to stop interfering in the country's affairs.

"Ukraine demands that the Russian Federation immediately stop interference in Ukraine's internal affairs and deliver on its public commitments to de-escalate the situation," the ministry said.

The Foreign Ministry also rejected Russia's proposal that representatives of Ukraine's eastern regions, including political candidates, take part in the talks, saying that only officials of the current Ukrainian government were allowed to participate.

As Russia and the U.S. were discussing the situation in Ukraine, Kiev sought to tackle separatist unrest in eastern regions and pro-Russian protests subsided.

The Supreme Rada on Tuesday passed a bill tightening penalties for separatism. Under the bill, the punishment for "infringing on the territorial integrity of Ukraine" was increased from three years to between five and 10 years for officials and to between three and five years for other individuals.

Authorities also managed to bring the situation under control in some eastern cities.

The Kharkiv administration building, which had been seized by protesters on Sunday, was reclaimed by police on Monday, but some demonstrators remained inside and subsequently declared the creation of a "People's Republic of Kharkiv."

Pro-Russian activists also clashed with police in Kharkiv late Monday, setting the building on fire and throwing Molotov cocktails before getting back into the building through the back door and seizing it once again.

Interior Minister Arsen Avakov wrote on Facebook on Tuesday that police had stormed the regional administration building overnight "without a single shot fired" and detained 70 protesters. 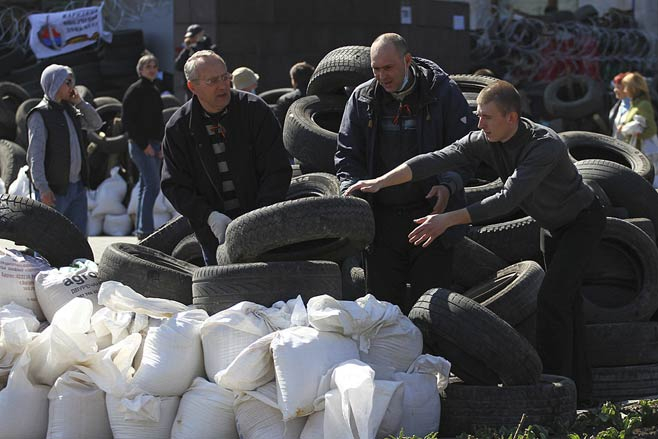 Pro-Russian demonstrators erecting a barricade in Donetsk on Tuesday.

In Donetsk, authorities opted for negotiations with the protesters rather than a flat-out crackdown. Powerful local tycoon Rinat Akhmetov, an ally of Yanukovych who has been accused by many of fomenting the protests, stepped in as an intermediary and told the protesters that he supported Ukraine's territorial integrity.

Pro-Russian protesters who had seized the regional administration building on Sunday and declared an independent "People's Republic of Donetsk" still occupied the building on Tuesday but were pushed out of the security service building late Monday.

The anti-Kiev protesters also met some opposition from local groups.

Mikhail Volynets, chairman of the Independent Miners Union, said late Monday that the union — which represents the region's main industry — would not support the pro-Russian protesters.

Meanwhile, the Committee of the Donetsk Region's Patriotic Forces, a pro-Kiev group, on Tuesday said that it had cancelled the creation of the People's Republic of Donetsk, though the pro-Russian activists disagreed with the decision.

Alexei Ryabchin, a Donetsk-based political and economic analyst, said by phone that the pro-Russian protest movement had subsided since March and had less sway now.

"The movement has become radicalized and marginalized since then," he said.

Ryabchin also said activists from Russia could be easily identified because of their accent and the way they dress. They mostly function as leaders and coordinators, he said, adding that they had previously accounted for 10 to 20 percent of the protesters and that their number had decreased.

In another eastern Ukrainian city, Lugansk, anti-government demonstrators on Tuesday retained control of the security service building they had seized on Sunday and said they would create a parliament of the self-proclaimed "Republic of Lugansk." The security service said on Tuesday that the protesters had mined the building and had taken 60 people hostage.

Ukrainian authorities and pro-Kiev activists have repeatedly said that pro-Russian protesters were using women and children as a "human shield" to prevent the police from attacking them.

In Mykolaiv, which is also Russian-speaking, pro-Kiev activists clashed with pro-Russian ones and removed the anti-government tent camp in the city late Monday.