Bush, who has taken up painting since leaving the White House, told NBC's Today show Friday that when Putin saw the American president's Scottish terrier — "our dear dog Barney, who had a special place in my heart — he "dissed" him, adding "You call it a dog?'"

A year later, "I go to visit Vladimir at his dacha outside of Moscow and he says, 'Would you like to meet my dog?'" Bush said. "Out bounds this huge hound, obviously much bigger than a Scottish terrier, and Putin looks at me and says, 'Bigger, stronger and faster than Barney.'"

"I took it in. I didn't react. I just said, 'Wow. Anybody who thinks 'my dog is bigger than your dog' is an interesting character.' And that painting kind of reflects that," Bush said. 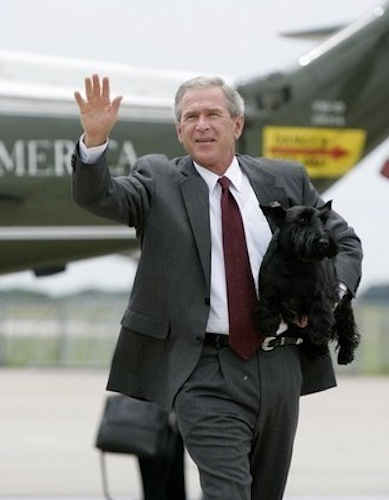 The portrait of a grim-looking Putin is among a series of Bush's portraits of world leaders, on display at the George W. Bush Presidential Library and Museum in Texas.

Critical reviews of Bush's art have been mixed, with New York-based critic Jason Farago writing in Britain's The Guardian that the paintings "are not bad so much as cautious, vacant, even servile — paintings by an artist anxious, or perhaps incapable, of doing anything that might leave a mark."

British art critic Alastair Sooke wrote n The Telegraph that "whether artfully or not, Bush paints in a similar fashion to the way he talks — affecting a folksy, homespun, plain-speaking tone, with just enough ham-fisted strangeness and bungling missteps to keep things interesting."

While dismissing most of Bush's works as "dreary and compositionally identical likenesses," Sooke made an exception for the portrait of Putin, saying "there is something unconventional and compelling about this image."

Bush met Putin for the first time in 2001, after which he famously said: "I looked the man in the eye" and "was able to get a sense of his soul." He also said he found Putin "trustworthy" at that time.

During the interview with NBC, Bush said he got to know Putin "very well" during the subsequent years, and their relationship remained "good," though it "became more tense as time went on."

"Vladimir is a person who, in many ways, views the U.S. as an enemy," he said. "I felt he viewed the world as either U.S. benefits and Russia loses, or vice versa."

Other paintings in the 43rd president's exhibition, titled "The Art of Leadership — A President's Personal Diplomacy," include a portrait of former British Prime Minister Tony Blair, the Dalai Lama and the artist's father, George H.W. Bush.