A day after European Union leaders met to discuss taking a firmer line on Russia over its annexation of Ukraine's Crimea region, pro-Russian demonstrators stormed government buildings in two Ukrainian cities and demanded autonomy from the new government.

Pro-Russian rallies in the cities of Donetsk and Lugansk in eastern Ukraine on Sunday culminated in about 100 protesters storming the regional government building in Donetsk and dozens occupying the state security services offices in Lugansk, Reuters reported.

In Lugansk, two protesters and a police officer were reportedly injured.

Protesters in Donetsk, the hometown of ousted President Viktor Yanukovych, barricaded themselves inside the administration building and hung a Russian flag from a second-floor balcony.

Ukrainian television reported that the protesters in Lugansk were demanding a referendum similar to the one conducted in March in Crimea, which paved the way for Russia's annexation of the peninsula, outraging Western countries and stirring fears of Russian ambitions of territorial expansion.

In a sign of sharp tensions in Ukraine's predominantly Russian-speaking east, demonstrators in Lugansk also demanded the release of several pro-Russians detained on suspicion of plotting to overthrow the new government in Kiev, which Moscow has said is illegitimate but the West recognizes.

The incidents come a day after EU foreign ministers met in Athens to discuss the ongoing Ukraine crisis and as NATO prepares to boost its military presence in Europe amid fears of Russia seeking further expansion.

"It is very important for us to remain strong and united about the sanctions that we have implemented against individuals in Russia and Crimea, and to prepare more far-reaching measures if they become necessary," British Foreign Secretary William Hague said in comments carried by  Associated Press.

Hague was supported by Swedish Foreign Minister Carl Bildt, who said the EU foreign ministers should be "very firm on international law and the rules that must apply," he said, The Associated Press reported.

Speaking at a news conference after the meeting, EU High Representative Catherine Ashton reiterated the EU's "determination to act together to deal with the threat to Ukraine's sovereignty and stability," the EU website reported.

Ashton told journalists before the meeting that it was "really really important that Russia show that it is serious about deescalation by moving troops back," she said, the EU website reported. 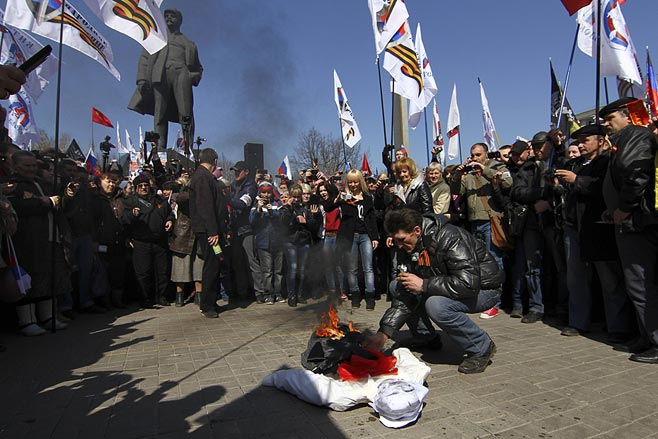 Asked by a reporter at her daily press briefing whether President Barack Obama's administration knew the location of Russian troops on the border with Ukraine, she said there were "still tens of thousands," the State Department's website reported.

"We cannot — last I heard, last I checked with our folks — independently confirm there had been some troops moved off of it," Harf said.

Concerned about possible military aggression from Russia, Poland has asked NATO for protection.

Polish Prime Minister Donald Tusk said Saturday that "the strengthening of NATO's presence [in Poland], also military presence, has become a fact and will be visible in the coming days, weeks," Reuters reported.

NATO will draft a plan for the deployment of its forces by mid-April.

NATO's plans for Poland were publicized a day after Russia recalled its top military representative to NATO, General Valery Yevnevich, for consultations.

Andrei Kelin, Russia's envoy to the Organization for Security and Cooperation in Europe, said that the activities of Russian troops on Russian soil was "not threatening the security of other OSCE nations," the Foreign Ministry reported Friday.

And despite EU talk of sanctions and taking a harsher stance on Russia, State Duma Speaker Sergei Naryshkin told senior lawmakers of the Black Sea port of Sevastopol — another territory annexed from Ukraine by Russia — that sanctions would not persuade Russia to return the seized land to Ukraine.

"No sanctions will make us deviate from the chosen way because this way is predetermined not only by our past but also by our present," Naryshkin said Saturday, Interfax reported.

"It is clear that no sanctions, not those already imposed, not the ones which may be introduced in the long run as part of new legislation, will have no desirable effect for Washington," he said, the Foreign Ministry's website reported.