Politics have a direct effect on the Russian music industry and influence its international aspects, according to participants at Colisium, Russia's foremost music industry conference, which was held in St. Petersburg last week.

The week that followed the conference demonstrated that the situation could become even worse as a local stadium concert by Ukrainian band Okean Elzy due to take place on March 31 was canceled Friday amid anti-Ukrainian sentiment among Russian politicians and pro-Kremlin media.

According to the promoter, Euro Show, 5,000 tickets had been sold for the concert. On Feb. 28, the Ice Palace arena announced the cancellation of the show, referring to unresolved financial issues with the promoter, which Euro Show denied. The cancellation came following the Legislative Assembly's United Russia deputy Vitaly Milonov's demands that the concert be cancelled.

On Friday, Euro Show announced that the concert would be moved to Sibur Arena, a new stadium on Krestovsky Ostrov, but several hours later the concert was canceled altogether, with the venue stating that it was unable to meet the technical requirements of the concert.

Euro Show, apparently intimidated by the pressure, was remarkably vague in its final statement regarding the concert. "This time something did not work out," the statement said. "A lot of time could be spent looking for who was right and who was wrong, trying to discover, invent and analyze the situation. We will leave it to others and not despair." In the same statement, Euro Show said it would not be looking for any alternative venues.

Milonov demanded on Feb. 21 that the Okean Elzy concert be cancelled due to frontman Svyatoslav Vakarchuk's alleged anti-Russian statements. Vakarchuk, whose band performed on Maidan in Kiev in support of Ukrainian protests against President Viktor Yanukovych's government on Dec. 14, 2013, responded by offering a large reward for any video showing him speaking out against Russia.

Earlier, Milonov and his supporters sued the promoter of Madonna and Lady Gaga concerts for the artists' alleged "promotion of homosexuality."

Speaking at a conference at the Consulate General of Finland on Feb. 21, Ilya Bortnyk, the head of the Light Music agency, pointed out that the Kremlin's political decisions had a negative effect on the music industry.

Bortnyk, whose agency produces the popular Stereoleto music festival and a large number of concerts by international artists, said a significant number of bands have withdrawn from their scheduled Russian tours or turned down offers to perform here due to the imprisonment of the three members of feminist punk band Pussy Riot in March 2012.

"The concert market, meaning the decision by artists about whether or not to tour Russia, is heavily influenced by the political situation," he said.

"When Pussy Riot were sent to jail, quite a lot of artists [refused to visit Russia]," said Bortnyk. "Personally, I experienced this three times. People said that as long as artists, and people in general, were being treated like this, they would not come. It cost me a lot of effort to persuade Dead Can Dance to visit and perform a concert [in October 2012] because they just said, 'We will not go." 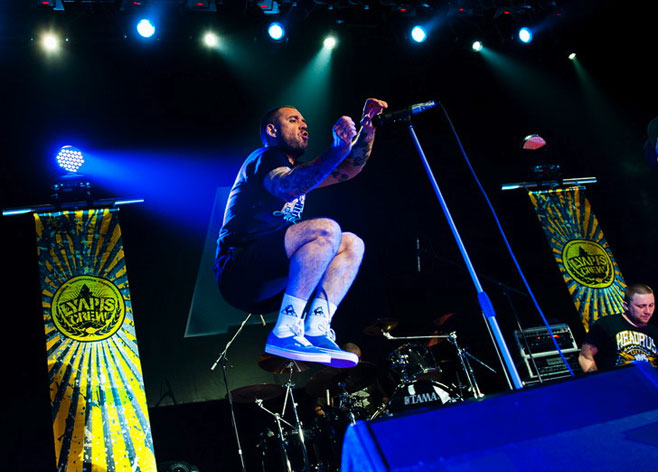 Belarussian band Lyapis Trubetskoi have been banned in their country.

Bortnyk also said that future political developments, such as the prison sentences that were handed down against the Bolotnaya Ploshchad protesters on Feb. 24, might also influence the decisions of international artists.

"This will not improve the desire of artists to come to Russia," he said. "The same goes for the law on the 'promotion' of same-sex relationships. We might understand that the law could never work effectively, but the reputation of Russia, and especially St. Petersburg, is that it is a place where you could find yourself behind bars immediately for being gay."

Vaidas Stackevicius, CEO of the M.P.3 music agency in Vilnius, Lithuania, who spoke at the same conference as Bortnyk, gave an example of how a Belarussian band allegedly prohibited from performing at home managed to reach their compatriots by playing in Vilnius.

Lyapis Trubetskoi, which will perform in St. Petersburg on March 8, packed an 8,000-capacity arena in Vilnius, with more than a third of the audience made up of Lithuanians.

Maxim Prikhodovsky, the concert program director with the Palace of the Republic, a state-run concert venue in Minsk, Belarus was quick to deny that a ban on Lyapis Trubetskoi existed in Belarus when asked about the situation.

Prikhodovsky said that the state had tried to approach the band in regard to its statements and perhaps to discuss opportunities for future concerts in Belarus, but the band would not engage with the authorities.

While Lyapis Trubetskoi was officially banned by the Belarussian government, the group found that sold-out concerts scheduled for Minsk and Gomel were canceled for "technical reasons." The band's frontman, Sergei Mikhalok, is known for his statements against Belarussian President Alexander Lukashenko.

"They do not even give a reason anymore," Mikhalok told The St. Petersburg Times in 2011, soon after his band had found itself blacklisted.

From St. Petersburg, the conference moved on to Minsk, Belarus and is due to be held in Kiev, Ukraine on March 6 and 7, followed by a stop in Almaty, Kazakhstan on March 12 and 13. The conference will also be held in Moscow from Sept. 11 to 14.