Tensions in Ukraine escalated further Thursday as ousted President Viktor Yanukovych claimed that he was still the legitimate head of state and requested Russia's protection, while Ukraine warned Russia against any military action.

A day after President Vladimir Putin ordered the Defense Ministry to put 150,000 troops near Ukraine on high alert, Ukraine's acting president warned that any further such moves would be "seen by us as military aggression."

"I am appealing to the military leadership of the Russian Black Sea fleet," said Olexander Turchynov, Reuters reported.

"Any military movements, the more so if they are with weapons, beyond the boundaries of this territory [the base] will be seen by us as military aggression," Turchynov said.

Much of the tension between the two sides has been concentrated in Ukraine's Russian-speaking republic of Crimea, where a referendum to vote on the peninsula's independence was announced Thursday.

The announcement came after a group of unknown men seized the buildings of Crimea's legislature and Cabinet in Simferopol, the republic's capital, earlier on Thursday. They hoisted a Russian flag on top of the building and demanded that a referendum be held.

Russia has so far refused to recognize the new Ukrainian government that came to power after Yanukovych's overthrow last week.

Instead, he said, the new government is "a 'government of winners' that includes representatives of extreme nationalists," but not of national unity, Reuters reported.

Yanukovych on Thursday issued a statement saying he was appealing to Russia for protection after receiving numerous death threats.

RBC Daily cited other unidentified sources as saying that Yanukovych had arrived in Russia from Crimea and was now living in the village of Barkvikha in the upmarket Rublyovka area near Moscow.

In the statement, Yanukovych said he believed he was still the legitimate ruler of Ukraine and condemned his opponents for failing to comply with an agreement signed on Feb. 21, according to which a compromise between Yanukovych and the opposition was reached.

"I still believe myself to be Ukraine's legitimate head of state, freely elected by Ukrainian citizens," he said. "Unfortunately, what is happening in Ukraine's Supreme Council [parliament] right now has no legitimate character."

Any orders to interfere in domestic affairs given by the new government to the armed forces would be illegitimate and "criminal," Yanukovych said, triggering speculation on whether this hinted at the possible use of armed forces in Crimea.

Yanukovych said that the residents of Crimea and Ukraine's other Russian-speaking regions were refusing to accept the new government, yet this contradicted recent statements by several governors and mayors in the eastern regions expressing support for Kiev.

"Now it is becoming obvious that the residents of southeastern Ukraine and Crimea are refusing to accept anarchy and lawlessness in the country, when ministers are elected by the crowd on a square," he said. "Extremism is rampant in the streets of many cities, and I can not be indifferent to the tragic events in my homeland."

The seizure of the buildings of Crimea's legislature and Cabinet on Thursday by unknown people further complicated the situation. 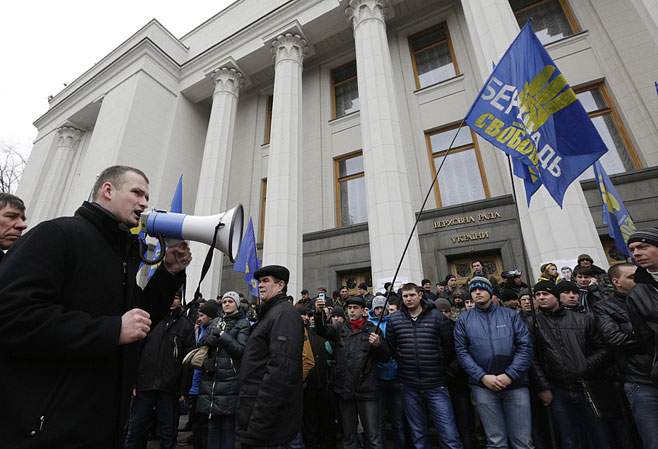 Anti-Yanukovych protesters gathering near the parliament building in Kiev.

The identity of the attackers was a matter of debate. Some said they were members of local self-defense units created to oppose the new central government, while Gennady Moskal, a deputy of the Supreme Council, said that former officers of Berkut riot police, which was disbanded on Wednesday, had participated in the seizure.

Vitaly Yarema, a deputy of the Supreme Council, voiced another theory, saying that Ukraine would appeal to NATO if the armed group turned out to be Russian special forces.

Vladimir Dzharalla, a Crimea-based political scientist, said by phone that it was still not clear who had seized the buildings. It could have been done either by Crimean authorities or by a spontaneous, chaotic movement organized by citizens, he added.

Ukrainian Interior Minister Arsen Avakov said the people were armed with assault rifles and machine guns, and that police and internal troops had been deployed around the buildings.

The attackers refused to hold negotiations with Crimea's cabinet and the Russian consul, Itar-Tass reported. They also detonated a stun grenade when journalists tried to approach the building, Ukrainskaya Pravda reported.

Ukraine's acting President Olexander Turchynov ordered police to eject the group from the Supreme Council building, but it was still occupied as of Thursday evening.

The attackers were supported by a crowd of protesters who gathered around the legislature's building and built barricades.

Submitting to the armed group's demands, the presidium of Crimea's Supreme Council announced Thursday that a referendum should be held on May 25 on broadening the republic's autonomy, a measure which could potentially lead to its independence.

The Supreme Council was expected to consider the issue but lacked a quorum as of Thursday evening.

The seizure of Crimea's legislature building and the announcement on a referendum coincided with numerous reports of Russian armored vehicles moving towards Simferopol.

Some observers say the idea of a Russian military invasion is not as farfetched as it seems.

Russia could send troops to Crimea if Ukrainian authorities violated the interests of Russian citizens or Crimea's Russian-speaking population, or if Ukraine violated its agreement with the Kremlin on naval bases, Dzharalla said. He added that a NATO contingent could also be sent to Crimea if the situation got worse.

"Everything is possible in this situation," he said.

Chechen President Ramzan Kadyrov said late Wednesday that he was ready to help Ukraine's Russian-speaking population, including in Crimea.

"If necessary, we will lend a hand to those humiliated by terrorists bred by the West and help them rise from their knees," he said.

In another effort to support Crimea's pro-Russian residents, a delegation of deputies from Russia's State Duma, including Irina Rodnina, Nikolai Valuyev and Valentina Tereshkova, arrived in Crimea on Thursday, an unnamed source told Interfax.

Some observers said that only a handful of residents in Crimea were eager to accept Russian help.

Valentin Burdonov, a 22-year old supporter of the anti-Yanukovych movement living in Simferopol, said by phone that most of his acquaintances and most of Crimea's population were apolitical, with pro-Russian self-defense units nowhere to be seen. While they are opposed to the central government, they would not actively support the idea of Crimea's independence, he said.

Burdonov said he believed Crimea's independence would not yield any positive results, burdening Russia with yet another region that it would have to support financially.

Crimea, which hosts Russian naval bases, has become an apple of discord between the Ukrainian authorities and the Kremlin. On Wednesday, disagreements over the republic's status led to clashes between pro-Russian and pro-Kiev demonstrators in Simferopol.