"Whoever tries to imitate me is lost," Soviet filmmaker Sergei Parajanov once said. Now, as Parajanov's 90th birthday is celebrated posthumously 24 years after his death, his work continues to influence artists and filmmakers around the world as new people and nations discover his films.

"Parajanov's work is genius for it is simple, it only appears to be complex," wrote Martiros Vartanov, head of the Parajanov-Vartanov Institute, in an e-mail to The Moscow Times. "It is this simplicity that excites artists and filmmakers around the world and compels them to believe in their own creative powers, especially in moments of artistic despair."

To mark Parajanov's birthday, two exhibits in Moscow — "The Color of Pomegranates" at the Na Solyanke Gallery and "Inner Circle" at Dom Nashchokina — highlight different aspects of the artist's life and show the great influence that Parajanov's work has had on artists and directors across the world.

Born in Tbilisi in Soviet Georgia in 1924, Paradjanov came from artistic parents and showed a flair for art from a young age. In 1945, Parajanov traveled to Moscow and enrolled in VGIK, the great Soviet film school pioneered by Sergei Eisenstein and Vladimir Gardin.

Parajanov was educated in the school of Socialist Realism, the dominant film style of the Soviet Union, under the tutelage of director Alexander Dovzhenko. However, Parajanov got the inspiration that led to the creation of his greatest films after watching Andrei Tarkovsky's film "Ivan's Childhood," released in 1962.

The nonlinear style and move away from strict realism seen in Tarkovsky's first feature film inspired Parajanov to abandon Socialist Realism himself and create his first major film "Shadows of Forgotten Ancestors," a work made in Ukrainian that dealt with the mythology of the Hutsul people. While Parajanov's first nonrealist work was fairly well received by Soviet leadership, he quickly angered Soviet elites with the release of subsequent films like "The Color of Pomegranates," also known as "Sayat Nova," his masterpiece depicting the life of the Armenian poet.

Soviet authorities became increasingly suspicious of Parajanov's activities, accusing him of homosexuality. Parajanov's sexuality is still a matter of controversy, with some scholars maintaining that he may indeed have been bisexual, but regardless of the truth of the matter he was sentenced to five years in a labor camp on charges related to homosexuality and pornography. 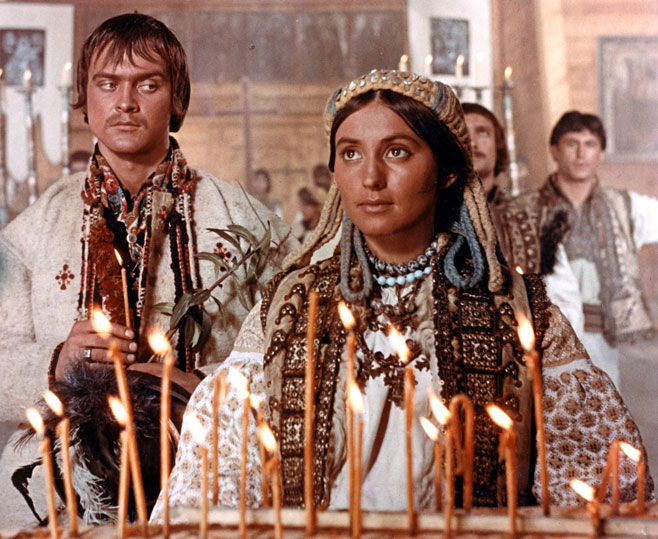 Parajanov’s first major film, “Shadows of Forgotten Ancestors” departs from Socialist Realism to depict the culture and mythology of the Hutsul people.

Even after Parajanov's release, he was effectively blacklisted and unable to produce films, and was closely followed by the government. Briefly imprisoned for a second time in 1982, this intense government persecution halted Parajanov's activity as a director for  a decade, ruining what might have been the most productive period of his life.

During this period, Parajanov turned to visual art, producing sketches and wonderfully detailed collages that show the strong focus on color and form seen in films like "The Color of Pomegranates." Some of these collages are on display at the Solyanka Gallery, and almost seem to act as a window into the artist's subconscious — the associations that Parajanov has with certain colors and materials, with images from his childhood and family, are all on display.

These collages are nicely complemented by the photos by Yury Rost on display at Dom Nashchokina in the exhibit "The Inner Circle," which capture Parajanov in some of his unguarded moments. Parajanov himself never intended to display his visual art and, due to state repression, was a very private person, so these two exhibits provide rare windows into his thoughts and personal life.

As Soviet censorship began to loosen in the mid-'80s, Parajanov was finally allowed to resume filming, creating his last two masterpieces — "The Legend of Suram Fortress" in 1984 and "Ashik Kerib" in 1988. These two works portrayed the cultures of Georgia and Azerbaijan, respectively, in the same way that his earlier works displayed the traditions of Ukraine and Armenia.

In this period, Parajanov's work finally began to gain attention both at home and abroad. Though many Western artists and directors — including Yves Saint Laurent, Jean-Luc Godard, Francois Truffaut, Luis Bunuel and Federico Fellini — had noticed Parajanov's earlier work and protested his imprisonment, his work began to gain a mass audience only in the late '80s, when it finally began to appear on the international festival circuit.

Parajanov died of lung cancer in 1990 at the age of 66, sadly too young to see how respect for his films would continue to grow over the next two decades. Film critic Myron Chernenko once wrote: "After Parajanov, it became clear: There's no way forward, further lies static, architecture, sculptures on film."

Indeed, in the decades after Parajanov's death, many filmmakers have confronted Parajanov's peculiar vision as primarily a visual medium rather than a means for storytelling, adapting his static, unmoving shots and sculptural set scenes to new subjects — certainly Alexei German's recent film "Hard to Be a God" show influences from Parajanov, and even mainstream music videos like Madonna's "Bedtime Story" and R.E.M's "Losing My Religion" have been said to draw inspiration from Parajanov's masterpiece "The Color of Pomegranates."

Additionally, his role displaying cultural traditions in film has inspired many aspiring filmmakers from countries without strong film traditions. In this way, Parajanov will perhaps has his greatest impact: Though rejected during his own lifetime and never quite understood in his home countries, Parajanov will always be an inspiration to up-and-coming filmmakers, who draw from his example of bringing little-known cultures to life through the visual medium of film.