As uncertainty about Ukraine's future grew on Tuesday and fears of separatism in Crimea increased, President Vladimir Putin remained silent — fueling speculation about what Russia's next move could be to recoup potential losses from the ouster of Kremlin-backed Viktor Yanukovych.

While the European Union and the U.S. have acknowledged Ukraine's change in leadership, Russia has staunchly refused to do so, instead calling Yanukovych's impeachment "armed mutiny" and expressing doubts about the legitimacy of the new leaders.

The crisis in Ukraine has put Putin in a particularly uncomfortable situation just days after praise for the Winter Olympics in Sochi seemed to give the country a welcomed image boost after months of criticism leading up to the Games. Losing Ukraine would put a dent in Putin's ambitious plans for the Eurasian Union and likely damage his reputation at home.

The predicament has many asking how far Russia will go to preserve influence in Ukraine, with journalists and lawmakers speculating about whether Russia would handle the situation miltarily or diplomatically.

Putin met with permanent members of Russia's Security Council on Tuesday to discuss the latest developments in Ukraine, but no information was available on the specifics of that meeting.

Observers have said that Russian military intervention may be necessary to save Crimea, where Russian naval bases are located and many citizens are ethnically Russian.

But Foreign Minister Sergei Lavrov shot down such speculation Tuesday, saying that Russia had no intention of intervening in Ukraine and that other nations should steer clear of the former Soviet republic's domestic affairs.

At a news conference in Moscow following bilateral talks with the Foreign Minister of Luxembourg, Jean Asselborn, Lavrov said it was "dangerous and counterproductive" to give Ukraine the choice of being either "with us or against us." 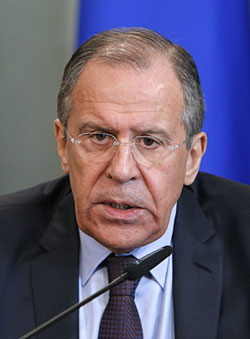 "We hope that everyone will adhere to similar logic and use contacts within various Ukrainian political forces to calm the situation, and not try to gain some opportunistic, unilateral advantages at a stage when there needs to be national dialogue," Lavrov said.

Deputy Foreign Minister Grigory Karasin also raised the country's concerns on the security of its compatriots in Ukraine at his meeting with Ukraine's Ambassador to Russia, Volodymyr Yelchenko.

The Foreign Ministry expressed its dismay at Ukrainian authorities' decision to repeal minority language rights — an initiative that affects Ukraine's large Russian-speaking population, as well as its smaller Romanian and Hungarian-speaking minorities — and at the prospect of Russian media being banned in the country.

Fears that Russians' security and rights are being threatened in Ukraine have emerged in Russia's State Duma, with many lawmakers promoting measures to assist those in Ukraine who would prefer to keep stronger ties with Russia.

As one of those measures, Liberal Democratic Party deputy Ilya Drozdov presented a bill to the State Duma on Monday about fast-tracking Russian naturalization for citizens of Ukraine.

"Ukrainian authorities have not been able to ensure security for its citizens, including its Russian population," the explanatory note to the bill said.

At the plenary session of the Duma on Tuesday, Sergei Mironov, the leader of A Just Russia, suggested that members of Ukraine's special forces — many of whom were villainized at home for allegedly using disproportionate violence against protesters — should be employed by Russia's Interior Ministry.

"Yanukovych betrayed his people," Mironov said. "The president saw from the windows of his palace how unarmed Berkut were being killed and did nothing."

Some political groups in Russia have taken it a step further and called for a military solution.

"Russia should announce that it is ready to send peacekeeping troops to Ukraine," said Andrei Kovalenko, leader of the Eurasian Youth Alliance, a Russian group that supports bringing back the Russian Empire. He said that economic and diplomatic tools would not be sufficient.

Others dismissed talk of sending the army to Ukraine as ludicrous.

"The biggest threat is Russia's imperialist intellectual elite, which is so colorfully depicting crazy scenarios," said Sergei Utkin, a foreign policy expert at the Russian Academy of Sciences.

Utkin said that such scenarios were often nothing more than wishful thinking that had little to do with reality, adding that he hoped more pragmatic considerations would prevail at the Kremlin.

"Much of the talk about this [military intervention] is based not on knowledge about Russian authorities' actual intentions but on the stereotypes of the past century, including the Brezhnev Doctrine," he said, referring to the Soviet Union's policy of interfering in Eastern Bloc countries' domestic affairs.

Much of the speculation about military intervention has focused on Crimea due to the peninsula's large Russian population and naval base. 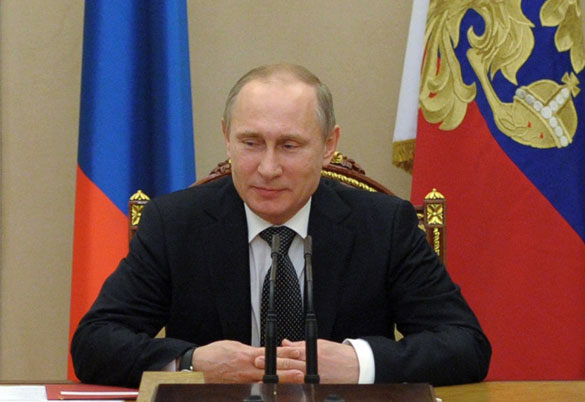 Putin heads a meeting to discuss the Ukraine crisis.

Tsekov said Russia should help the Crimea by promoting social programs and using diplomatic and legal tools to support the region. For instance, it could influence the situation in Ukraine at the UN and Organization for Security and Cooperation in Europe and make statements protecting Crimea's autonomy, Tsekov said.

Another way for Russia to preserve its influence in the Crimea is to establish "special economic relations" with the republic and invest in its economy despite the risks involved, Tsekov said.

He said that Crimea's secession from Ukraine, an idea backed by some Russian nationalists, was a real possibility if Ukraine's central government antagonized Russian-speaking citizens and provoked clashes in Crimea.

"If shooting starts in Crimea, it will not be a part of Ukraine anymore," Tsekov said.

But Andrei Klimenko, editor-in-chief of Crimea's Black Sea News site, said the situation on the peninsula was calm despite recent pro-Russian rallies.

"Hysteria is being created around the Crimea, but everything is calm here," Klimenko wrote on Twitter on Tuesday.

"People are not taking to the streets. The local authorities and law enforcement agencies have yielded to the new government. Yanukovych's portraits were removed from all government offices the day before yesterday," he said.

He said that local cossacks and self-defense units created to oppose Euromaidan supporters had vanished from the scene once a prosecutor issued them a warning, and many people had been enjoying visits to Yanukovych's former residences in Yalta and Laspi.

Kremlin-controlled television has painted a different picture, however, claiming that Ukraine's southeastern regions were becoming increasingly unstable and implying that Russia should interfere in some way.

Former Georgian President Mikhail Saakashvili said Russia would inevitably interfere regardless of whether or not the situation became unstable.

A staunch opponent of the Kremlin, Saakashvili predicted that Putin would try to get control of the Crimea by using the Russian Navy to block the Isthmus of Perekop. He compared the situation in Ukraine to that in Georgia's pro-Russian breakaway republic of South Ossetia, Espresso.tv reported Tuesday. In 2008, Russia and Georgia waged a war over South Ossetia's status, with both sides accusing each other of being the first to attack.

On Monday, Saakashvili spoke at the Maidan Nezalezhnosti protest camp in Kiev, saying that the Euromaidan movement had defeated the Kremlin and that Putin's "Russian Empire" would collapse as a result.

"You managed to defeat an empire that deemed itself invincible," he said. "It is important to make sure now that Putin does not take away your victory and doesn't squeeze your politicians into a dark room to bribe them with his billions."