A Moscow court on Friday found eight defendants in the so-called Bolotnaya case guilty of participating in riots and using non-deadly force against police officers at an anti-Kremlin rally in Moscow in 2012.

A police spokesman told Interfax that about 200 people were detained on Friday outside the Zamoskvoretsky Court, where the start of the session was delayed by more than three hours.

The reading of the sentences has been delayed until Monday.

The case relates to an authorized rally on Moscow's Bolotnaya Ploshchad that ended in clashes between demonstrators and police — as well as hundreds of detentions — on May 6, 2012, the day before President Vladimir Putin took office for a third term.

Critics say that the case is politically motivated, forming part of a wider crackdown on Kremlin opponents, and that the skirmishes were stoked by police aggression.

About 400 people, including opposition leader Alexei Navalny and Pussy Riot's Nadezhda Tolokonnikova and Maria Alyokhina, gathered outside the court earlier Friday to show their support for the defendants with cries of "Freedom! Freedom!"

The crowd also observed a minute of silence for the victims of the violent protests in Kiev and eight white doves — one for each defendant — were released nearby. 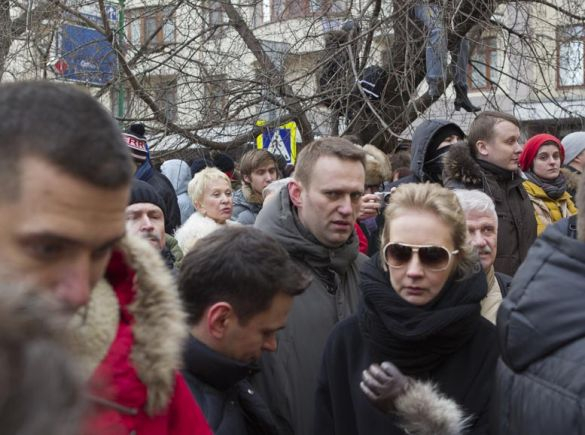 Opposition leader Alexei Navalny and his wife (wearing sunglasses) in the crowd outside the court. (Igor Tabakov for MT)

Opposition leader Sergei Udaltsov wrote on Twitter that Maria Baronova and Vladimir Akimenko, both of whom were suspects in the Bolotnaya case before being amnestied, were among those detained outside the court.

Udaltsov, who earlier this week appeared in court to face charges linked to the same 2012 rally after more than a year under house arrest and pretrial detention, said that members of his Left Front movement were also detained.

Novaya Gazeta later reported that Akimenko had been spotted in the crowd outside the court.

It is unclear whether he escaped from the police van, or was never detained in the first place.

Yelena Kostyuchenko, a reporter from Novaya Gazeta, and Kommersant FM's Pyotr Parkhomenko were held by police, however.

Parkhomenko said that he had been unable to show police his accreditation in time and had been held without explanation.

As people were being detained, people in the crowd were heard chanting "Berkut!," the name of the riot police in Kiev.

Both Udaltsov and Navalny took to Twitter to call for even more people to descend on the court on Monday, a day after the Sochi Winter Olympics end.

Security outside the State Duma was stepped in the wake of the decision amid reports that a rally could be held on Manezh Square, a short distance away.

Of the 29 people linked to the Bolotnaya case, 11 have already been amnestied and two have been sentenced to prison terms.

Another was sentenced to mandatory psychological treatment.