For Russians watching state television news over the past several weeks, the message about the political turmoil in Ukraine is clear: The anti-government protests are a U.S. plot.

Take, for example, this Jan. 22 evening news broadcast on Channel One. In a section called ­"experts' opinion," the following explanations for the protests were presented:

• Communist Party leader Gennady Zyuganov: "The U.S. secretary of state is dictating how to control the [Ukrainian] power ministries."

• Duma Deputy Mikhail Yemelyanov from A Just Russia: "Western powers are supporting violence among the protesters."

In addition, Rossia 1 state television anchor Dmitry Kiselyov said on the Jan. 23 "Poyedinok" program  that the U.S. is sending huge amounts of money to the opposition via diplomatic mail. (Kiselyov did not explain, however, how he discovered the money if it was sealed in diplomatic pouches.)

Journalist Maxim Shevchenko, speaking on Ekho Moskvy radio, even named the amount the U.S. has purportedly doled out to the opposition so far — $5 billion. He did not name his source of information, however.

Meanwhile, Liberal Democratic Party leader Vladimir Zhirinovsky said on Rossia 1, "The Americans have come to Ukraine just like the ­Nazis came to Poland with one goal: to try to conquer Russia." Political analyst ­Veronika Krasheninnokova, infamous for her strong anti-Americanism, said on ­Rossia 1 that "The U.S. has opened its Western front in Ukraine, which is the latest stage in the U.S. offensive against Russia."

Ukrainian authorities also believe that a Western plot is behind the protests. Notably, when Ukrainian protester Dmytro Bulatov was abducted and tortured recently, his unknown attackers asked, "What orders do you take from the U.S. ambassador?" according to The New York Times.

At the same time, the Kremlin, Foreign Ministry and Duma have repeatedly issued statements condemning "Western meddling" in Ukraine, while conveniently ignoring the fact that it was precisely Russia's meddling — namely trade sanctions and other pressure placed on Ukrainian President Viktor Yanukovych to walk away from an association agreement with the European Union — that triggered the Kiev protests in the first place in November.

The Kremlin's propaganda campaign has largely succeeded in distorting Russians' view of the Ukrainian protests. According to a Levada Center survey taken in late January, 44 percent of Russians — the largest percentage — believe that Western influences are the main reason behind the Ukrainian protests. (Only a small percentage of Russians believe the protests are inked to Yanukovych's corruption or lawlessness.)

In reality, the reasons for the protests in Kiev and other Ukrainian cities have nothing to do with the U.S., of course, and everything to do with Ukrainians' animosity toward Yanukovych's rule.

Public sentiment started to turn against Yanukovych in October 2010, only six months after he was elected president, when he pressured the Constitutional Court to boost his presidential powers. Then in 2011, he jailed his chief opponent, former Prime Minister Yulia Tymoshenko, in a politically motivated case. In 2012, he manipulated the parliamentary elections to ensure a majority for his ruling party.

What's more, over the past four years Yanukovych has allowed his son and other members of his inner circle to become incredibly wealthy. His complete tolerance for corruption has allowed it to spread to nearly every municipality in the country. Although there have always been high levels of corruption in Ukraine, any citizen of the country will tell you that it has gotten markedly worse under Yanukovych. 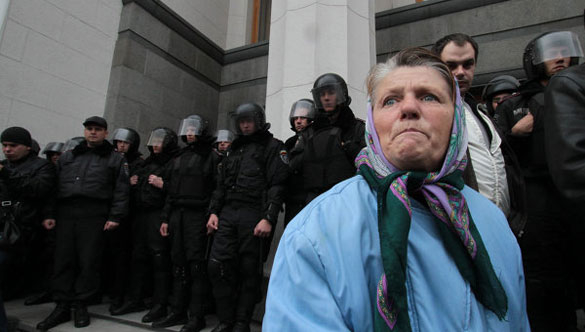 A Ukrainian pensioner standing in front of a line of riot police.

As this corruption flourishes and the gap between the wealthy and poor widens, most Ukrainians struggle with a low standard of living — about half that of Russia. The country's per capita gross domestic product based on purchasing power parity is about $7,300, which puts the country below even Tonga, Guyana and Namibia. This helps explain why there are so many Ukrainian migrant workers in Russia.

Many Ukrainians, particularly in western Ukraine, compare their standard of living with nearby Poland, which has roughly the same population. While the per capita GDP of both countries was about the same in 1992, Poland's per capita GDP today exceeds Ukraine's by nearly three times — and this has occurred even though Ukraine is much richer in natural resources than Poland.

The secret of Poland's economic success is linked to its strong rule of law, a low level of corruption, friendlier business environment, independent courts and parliament, and a transparent government that answers to the people — all of which are absent in Yanukovych's Russian-style autocracy. 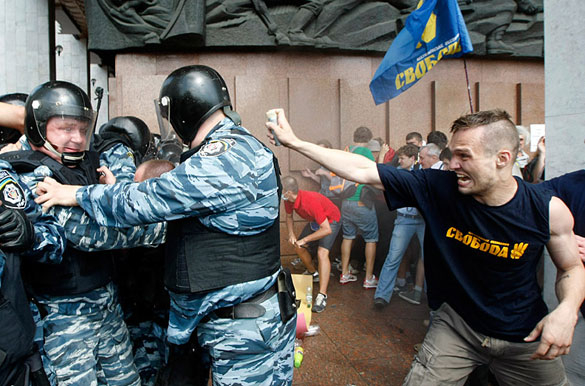 A Ukrainian protester in Kiev.

Yanukovych's sharp drop in popularity proves the axiom that applies to almost every autocracy. An autocratic regime can steal from the people, abuse power and deprive most of its citizens of a decent standard of living — and get away with this for decades. But at some point, when things get bad enough, the people will say "Enough!" and start fighting for their basic rights and dignity. That point has now come in Ukraine, much as it did in Eastern Europe in 1989 and the Soviet Union in 1991.

In the end, it looks like U.S. Senator John McCain was correct after all when he warned President Vladimir Putin in a 2011 tweet to be careful: "Dear Vlad, the Arab Spring is coming to a neighborhood near you."

Putin should heed the warning.

Western governments have not made a formal finding of responsibility for this week’s sabotage attacks on two Russian underwater pipelines carrying...
opinion Alexander Gubsky

The Price of Lying

In the first lecture of a new lecture series to take place at different European universities and organized by The Moscow Times, Alexander Gubsky, publisher...
opinion Alexandra Borissova

After seven months of war with Ukraine, Russian President Vladimir Putin has declared mobilization and is poised to annex four occupied Ukrainian regions...