People in Russia first started talking about Amedia's films, television shows and production studio with the success of their series "Don't Be Born Beautiful," the Russian adaptation of the American "Ugly Betty." A banal story of a love affair between colleagues, the show was chewed over by Russians for 200 episodes from 2005 to 2006.

This is exactly the sort of success that Alexander Akopov, Amedia's founder, was gambling on. Akopov has extensive background in television, having worked for four different television networks and co-founded four companies over the course of his career to date.

Akopov wanted to create television content that would be watched by all the family members and that could share common human values without being too sophisticated. After 10 hours in the office and two or three hours in traffic jams, Akopov figured that most people wanted to have a good dinner at home and relax their brains.

Discovering the bios of most influential Russian entrepreneurs in the entertainment business, it is common to find American education or at least some training or work experience in the U.S. This is the case for Alexander Akopov, who was a producer for the U.S. television channel PBS in 1992.

Amedia's motto is: 'Relax your brains, but do not go below the belt in relaxing"
Alexander Akopov
Amedia founder

The creation of more now-beloved television shows such as "My Fair Nanny" and "Who Is The Boss," both remakes of  shows, launched public careers for many previously-unknown actors and gave Amedia a reputation as a titan of Russian television.

Only half a year ago, Akopov launched broadcasting of dubbed and original television shows from famous U.S. studios like HBO, Showtime, Starz and Fox. Called Amedia Premium, the channel has no commercials and requires a monthly subscription of 99 rubles ($3).

"The channel is a startup with long-term investments, obviously," said Denis Gorshkov, Amedia Premium's vice president of programming and acquisitions. "For 12 years, the company was functioning as a large studio U.S. American series and pioneered industrial methods of  drama production in Russia." Gorshkov explained that the company gained momentum in 2005, when it was joined by Ukrainian-American Leonard Blavatnik, who helped the company to expand their assets worldwide. 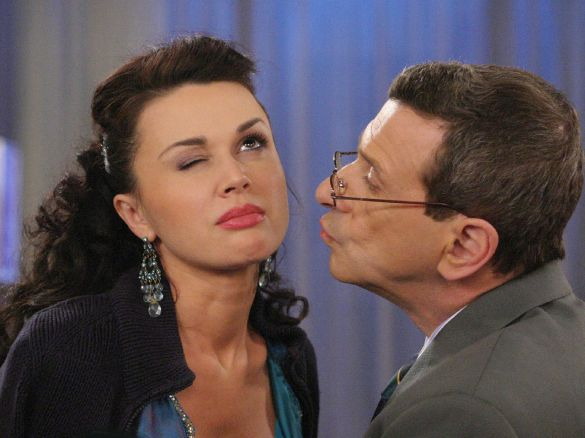 Amedia's "My Fair Nanny" is a successful remake of an American show.

Denis Gorshkov is responsible for much of the creative work at Amedia Premium, managing the programming and choosing shows as well as thinking of new ideas for adaptations and promos. However, he says it is difficult to make forecasts about the financial future of the network. "There is a lot from intuition in this business," Gorshkov said.

Besides Amedia Premium, Amedia also has the free Amedia One network, available through the largest cable and satellite television providers, as well as the paid online service Amediateka.ru, which offers online video streaming for computers and mobile devices.

In the U.S., youth may group together in fan clubs around specific shows like "Game Of Thrones" and "Breaking Bad," but Russian viewers do not follow this trend. Amedia Premium viewers are mostly well-educated and well-paid young professionals who frequently speak English at some level.

However, most people in Russia still speak no English, and for them Amedia Premium do professional multi-voice dubbing of all of their shows. This means that for six different characters in the movie they pick six different actors. The actors doing dubbing must be impersonalized, noncelebrities, so as not to spoil the impression of the original movie. People need pleasant voices without pronunciation imperfections.

Finding professional actors with good voices is not that difficult, and Denis Gorshkov is not dependent on the collection of actor portfolios from the mother Amedia production studio. With the Australian show "Ja'mie: Private School Girl," Gorshkov needed an actor to dub 38-year-old Australian male comic Chris Lilley, who plays a 14-year-old girl. In the end, Amedia settled on Russian comic Alexander Gudkov, who wound up being so organic and independent in his dubbing that Amedia Premium eventually changed the name of the series in Russian, making it "School Chronicles of Angela."

Amedia's introduction of paid television was part of a larger trend and coordinated with the anti-piracy law that entered into effect in the Russia in July 2013. Paying for television content is common practice all over the world, and is now becoming normal in Russia as well. While free television channels will always be available, paid television has number of strong competitive advantages. In the U.S., paid television series often have much higher production budgets, attract the best actors and consequently get many television awards.

Amedia production studio and Amedia Premium are striving to keep a high level of entertainment product. "Relax your brains, but do not go below the belt in relaxing" — as founder Alexander Akopov said — is still the driving principle of the company's business.