UNITED NATIONS — The U.S. ambassador to the United Nations has called on Russia to use its influence with the Syrian regime to help get humanitarian aid to the besieged city of Homs.

Tense negotiations between the Syrian government and opposition entered their fifth day Tuesday, focusing on the transfer of power and helping besieged parts of Homs.

The emphasis on Homs and release of detainees are meant as confidence-building measures. A tentative agreement was reached in Geneva over the weekend for the evacuation of women and children trapped in Homs before aid convoys go in. Central Homs has been under siege for nearly two years.

U.S. Ambassador to the UN, Samantha Power, in a speech during international Holocaust commemoration day on Monday, said that just as Russian soldiers liberated Auschwitz in 1945, "the world again needs Russia to use its influence, this time to ensure that food reaches the desperate and starving people imprisoned in besieged Homs, Yarmouk, the Damascus suburbs and elsewhere."

"The horrors of the Holocaust have no parallel but the world continues to confront crimes that shock the conscience," Power said during an event where film director Steven Spielberg gave a keynote address and a survivor of the Nazi genocide also spoke. "In October, the Security Council spoke with a united voice about the need for action to address the humanitarian devastation in Syria. There are people who are imprisoned in their own neighborhoods." 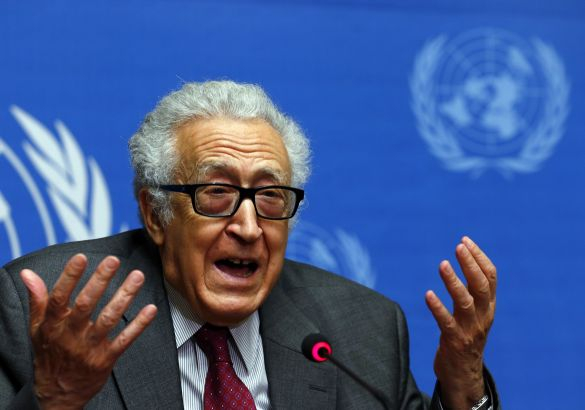 "They need food desperately and yet food cannot reach them because the regime will not allow it."

Russia's mission to the UN criticized Power for bringing the Holocaust into the Syria issue.

"We regard such analogies as entirely inappropriate," said Alexei Zaitsev, a spokesman for the mission, in an e-mail.

Such sharp exchanges have been typical of Security Council powers when it comes to Syria's civil war. Russia and China back President Bashar Assad and have blocked Western efforts to push through Security Council action that would pressure his government to end the violence.

In a statement released Tuesday, Homs Governor Talal Barrazi said police, paramedics and members of the Syrian Arab Red Crescent were ready to arrange the evacuation and "we are waiting for the UN's response." But UN-Arab League mediator Lakhdar Brahimi said security problems were delaying the evacuation.

Britain's ambassador to the UN, Mark Lyall Grant, told reporters that the Geneva talks present "an opportunity for the Syrian regime to show its willingness to humanitarian access" into Homs and other areas. He did not discount the possibility of UN Security Council action if the Syrian regime does not do so, although unity on the issue seems elusive.

Opposition activists living in the Old City in Homs posted a letter on social media on Tuesday saying that unless the siege was fully broken, all other measures will be "superficial."

"We assure you and the world that the demands of the besieged are not limited to humanitarian aid," it said, adding that there are dozens of medical cases that require surgery.