The World Economic Forum, the annual gathering of global business and political leaders taking place in Davos, Switzerland this week has played host to a number of interesting Russia-related events. In 1996 a group of Russian oligarchs devised a scheme that saved President Boris Yeltsin from certain defeat in the upcoming presidential elections, while in 2000 an American journalist would become the first to inquire about the essence of the country’s new leader, when she asked, “Who is Mr. Putin?” High-level Russian officials largely ignored the Davos Forum for the next few years, but since 2007 they have used the event to project the new face of Russia and lure foreign investors. Here are a few of the most memorable moments at Davos since 1996.

The 1996 World Economic Forum in Davos was a key battleground for the future of the troubled post-Soviet Russian state. Then-President Boris Yeltsin was up for re-election after his first term as president of Russia, and he was destined for defeat in the face of the nation's dissatisfaction with the way things had gone since the fall of the Soviet Union. The Communists, lead by Gennady Zyuganov, stood to retake power in the coming presidential elections, just as they had retaken the State Duma in December 1995. For Russia's new business elite, the oligarchs, a communist victory would surely result in the seizure of the assets they had accumulated over the previous few years. And that was the best-case scenario.

Frantically, the oligarchs met on the sidelines of the Davos forum to devise a means of ensuring Yeltsin's political survival at any cost. This was no small order. At that time, Yeltsin's approval rating was scarcely 10 percent. In order to protect their riches, a motley alliance featuring the young Mikhail Khodorkovsky, media baron Vladimir Gusinsky, and the outspoken “kingmaker” Boris Berezovsky established a campaign war chest of sorts, otherwise known as the “Davos Pact.” The scheme involved blatant manipulations of the election by leveraging their media assets to torpedo the Zyuganov campaign, while ensuring that the public saw Yeltsin as an attractive candidate.

These efforts were successful, and forever altered the political direction of the Russian Federation. The oligarch's political manipulations would be further emboldened in 2000, when Yeltsin anointed an obscure FSB man to be his chosen successor. 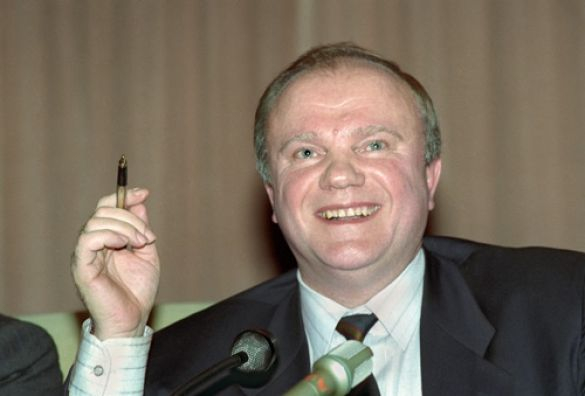 Gennady Zyuganov at the World Economic Forum 1996 in Davos. He was the only rival to Boris Yeltsin, Boris Berezovsky said. (Itar-Tass)

U.S. journalist Trudy Rubin becomes the first to ask the oft repeated question, “Who is Mr. Putin?” The question was levied at a panel of top Russian officials attending the forum. Not one of them elected to answer the question. In years following this event, Rubin's question has come to symbolize the West's preoccupation with the Russian leader's opaque past. 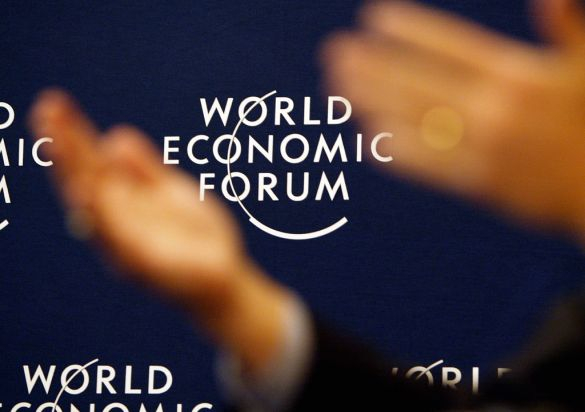 Widely considered to be then-First Deputy Prime Minister Dmitry Medvedev's international debut and unveiling as Putin's chosen successor. Medvedev became the highest level Russian leader to attend Davos since Putin's ascension in 2000, marking a new era of Russian engagement with the World Economic Forum. As the head of the delegation to the forum, Medvedev was joined by other members of the Russian moderate and liberal elite such as then-Economic Development and Trade Minister German Gref, and head of the electricity monopoly Unified Energy Systems, Anatoly Chubais. Medvedev was sent to Davos in an attempt to shore up his country's international reputation, which had been greatly soured the previous year following oil and gas pricing disputes with its neighbors — Ukraine and Belarus. The spat eventually led to Russia shutting down energy supplies to both countries, thereby negatively impacting European supplies.

Medvedev attempted to reassure foreign investors that Russia was indeed reliable, and that prospects for growth would be bolstered by increased diversification of the economy, infrastructure improvements, and the development of a highly-skilled workforce. In his remarks Medvedev was quick to point out that comparisons between the new Russia and the Soviet Union were warranted in only one regard: “This year we will reach the highest level of GDP reached in the Soviet era.” 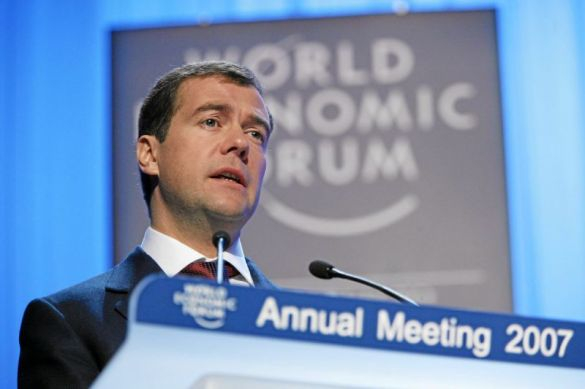 Russia became synonymous with “party” in 2008 when investment bank Troika-Dialog threw a lavishly over-the-top invitation-only celebration at the Valiant Arena ice stadium in Davos. The event featured a team of top chefs flown in from Moscow to treat partygoers to such Russian staples as meat pies and blini served by waiters in traditional Russian folk garb. Guests gathered on the stadium's third floor for vodka shots and French wine set to a dueling guitar and violin playing covers of Russian folk music. This was followed by a parade of Russia's 17 best skaters — including famous names like Yevgeny Plushchenko, Tatyana Navka, Roman Kostomarov and Irina Slutskaya — treating at least 200 guests to a private show that which included fireworks. And to top it all off, attendees were given the option after the show of taking to the ice with the stars or attending a side-tent social where they could mingle with some influential Russians, such as Google co-founder Sergei Brin and numerous billionaires.

Anyone who still doubted that Russia was the place to bring your money the morning after the party was granted a private audience with then-Finance Minister Alexei Kudrin. 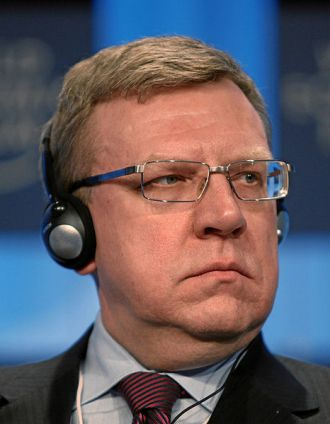 Putin, now prime minister, finally decided to grace the international elite with his presence at the forum. Hot on the heels of the global financial crisis, Putin's keynote address struck a rather conciliatory tone and appealed for greater international cooperation in dealing with the crisis.

Putin also lashed out at Michael Dell during the forum in response to the latter’s offer to help develop Russia's IT infrastructure. In a truly characteristic fashion, Putin turned his nose up at Dell's offer saying, “The trick is: we do not need any help. We are not invalids. We do not have limited capacity. People with limited capacities, abilities should be helped … developing countries should be helped.” 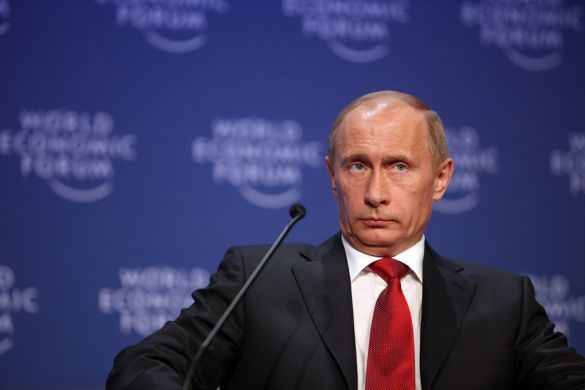 After taking a back seat at the 2010 World Economic Forum, Russia sent then-President Dmitry Medvedev back to Davos to again reassure the international business community that Russia was open for business, and that it was making sincere efforts to make life easier for foreign investors.

Medvedev began his address before the forum with a strong condemnation of terrorism, speaking only two days after bombing of Moscow’s Domodedovo Airport that killed almost 40 people. He went on to blame terrorism for hindering economic recovery, before touching on other subjects such as Internet freedom, international cooperation on natural disaster response and climate change.

During his keynote address, Medvedev outlined an ambitious 10-step plan aimed at improving the investment climate in Russia. This strategy featured the privatization of a number of state-owned companies, the creation of an international financial hub in Moscow and the establishment of a sovereign fund to reduce investor risks.

Other highlights included the president’s defense of the case against former Yukos CEO Mikhail Khodorkovsky, who was still imprisoned at the time. In the spirit of his broader message — that Russia was governed by the rule of law — Medvedev sought to justify the jailed oligarch's treatment by comparing him to Bernard Madoff. 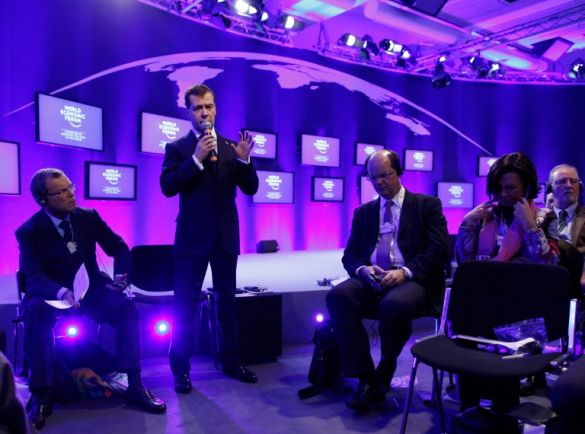 Dmitry Medvedev goes to Davos to convince the international business elite that Russia is open for business and sincerely trying to make business easier for foreign investors. (East News / AFP)

With elections demanding the attention of both Medvedev and Putin at home, neither attended the 2012 event. This enabled members of the Russian delegation, such as Sberbank chief German Gref, and former Finance Minister Alexei Kudrin to speak candidly about the political and economic situation in the Russian Federation. Their concerns were echoed by other members from the various moderate factions of the Russian elite, united in their concern that unless Putin were to make concerted efforts at enacting deep economic and political reforms, he would face large-scale civil unrest and economic ruin.

After an unusually public spat over rising social and military spending, Kudrin was sacked by then-President Medvedev in late 2011. He attended Davos in the role of a professor from St. Petersburg State University, and chaired a number of the Russian delegation's official events. In other words, Kudrin's fallout out with Medvedev did not appear to have hurt his standing with other members of the Russian and international business elite. In fact, he used the forum as yet another opportunity to call for increased plurality in Russian political life, but refused to comment on his prospects for becoming a major opposition figure.

At a breakfast hosted by Sberbank, bank chief German Gref called for reform, saying that “our model of administering the state is obsolete.” He conducted an on-the-spot poll of those attending the breakfast, including Kudrin, on the most pressing challenges facing Russia. The answers were consistent — corruption, excessive government involvement in the economy and archaic political practices. 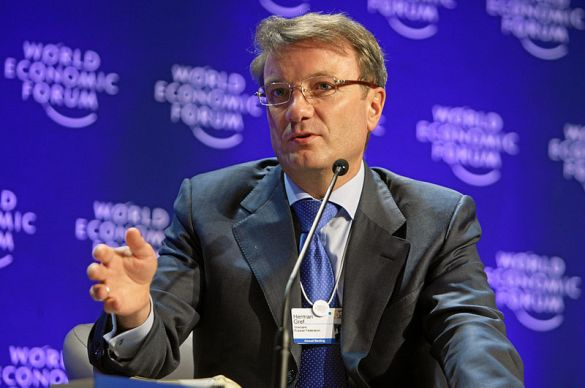 Prime Minister Dmitry Medvedev once again returned to to assure the world that Russian political and economic development was continuing along a positive path. He dismissed concerns that his government was facing civil unrest and serious economic difficulties should they fail to institute systemic reforms. Medvedev also shocked Davos attendees when he told Bloomberg that “Gazprom may lose its monopoly on gas exports from Russia.”

Russian businessmen used the event to express their concerns with the Magnitsky affair. Specifically, they worried that their legitimate business dealings could get swept up in red tape resulting from the international response — the Magnitsky Act being the prime example. Many complained that the Kremlin's hard-line stance on Magnitsky was only making matters worse, but that no one wanted to bring the matter directly to Putin. 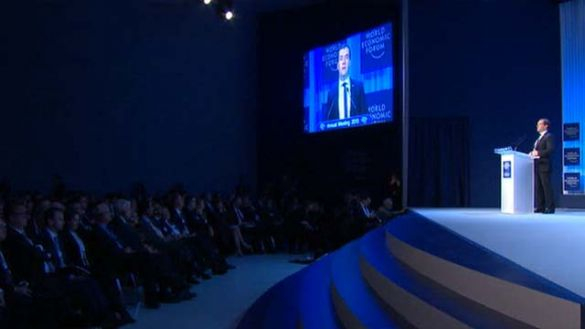 Dmitry Medvedev returns to reassure the global business elite that the economic development was continuing along a positive path. (1tv.ru)

Putin and Shoigu's outings into the Siberian wilderness have become a regular fixture.
russia's response