The founder of the Garage contemporary art center and billionaire Roman Abramovich's longtime girlfriend, Dasha Zhukova, apologized Tuesday for a photograph showing her sitting on a chair designed to look like a half-naked black woman.

The photo, which accompanied an interview with Zhukova by the fashion website Buro247.ru, emerged online Monday as the U.S. was celebrating Martin Luther King Jr. Day, which remembers the impact of the African-American civil rights leader. The image has since been cropped to show just Zhukova and the chair's "feet" after the picture caused outrage among Internet users who said it was racist.

In a statement sent to The Moscow Times, Zhukova said, "This photograph, which has been published completely out of context, is of an art work intended specifically as a commentary on gender and racial politics. I utterly abhor racism, and would like to apologize to anyone who has been offended by this image." 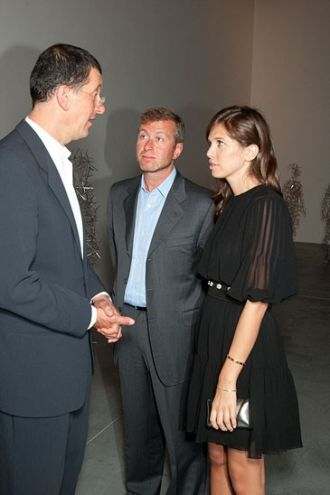 The statement also said that use of the chair in the Buro 24/7 photo shoot was "regrettable," particularly given its publication on Martin Luther King Jr. Day.

The picture in question shows a scantily-clad black woman wearing bondage, folded into a chair with her legs in the air and Zhukova sitting on her bottom. A "white" version of the chair, created by Norwegian artist Bjarne Melgaard, is also available, though was not used in the shoot. Melgaard reportedly intended the chairs as a response to a similar piece by Allen Jones in 1969.

"Those of us who have seen the image … think that the Russian police should find the fake artist who has caused international offense and arrest him or her and put them in jail for the international crime they are promoting," Simpson-James said on an open letter to Zhukova and Abramovich, who live in London.

"I will never think of a Russian person, or the country of Russia, as decent ever again," she said in the letter, a copy of which was e-mailed to The Moscow Times.

Twitter users drew parallels between the imagery of the chair and the historical and contemporary repression of black people.

"MLK didn't die for this" another user wrote.

The cropped image and interview were still accessible online Tuesday. But the photo that appeared on the Instagram account of Miroslava Duma, founder of Buro 24/7, had been removed.

Buro 24/7 said it supported equal rights for all people offered an apology in English and Russian on its Facebook page.

"Buro 24/7 is against racism and everything that may humiliate people," it said. "The chair presented on a photo should be seen like nothing but a piece of contemporary art. We sincerely apologize if the posted photos insulted our readers."