When Igor Popov died on Jan. 1 at the age of 76, we lost one of the great Russian theater artists of the last half-century.

Popov's design work is so closely entwined with the productions of Anatoly Vasilyev that the latter's name tends to eclipse the former's for all but specialists in the field. But one can't help but wonder if the Vasilyev we know would exist at all without Popov.

The designer and the director met at the beginning of their careers. Vasilyev, still a student in the early 1970s, came into contact with Popov, an architect who had studied in Novosibirsk but was then working at an experimental engineering institute in Moscow. According to Polina Bogdanova's book, "The Logic of Time. Anatoly Vasilyev: Between the Past and Future," it was Popov's wife Olga Dzisko who can take indirect credit for the introduction.

Their collaboration began with one of those curiosities that suit legend well. Vasilyev was invited by Oleg Yefremov to help him stage a play called "Solo for a Clock With Chimes" at the Moscow Art Theater. Yefremov asked the young director who he would like to have design the show. Vasilyev wanted either the well-known Boris Messerer or Sergei Barkhin. Yefremov said that was impossible and Vasilyev countered by suggesting the unknown Popov. Yefremov agreed and, in 1973, with the soon-to-be-legendary production of "Solo for a Clock With Chimes," the wheels of history were set in motion.

The duo created two shows at the Moscow Art Theater; a third was not completed; then moved to the Stanislavsky Drama Theater where they created several of the era's most influential productions — "Vassa Zheleznova — First Version" (1978), "A Young Man's Grown-up Daughter" (1979) and "Cerceau" (1985).

When Vasilyev founded his own theater, the School of Dramatic Art, in 1987, Popov was appointed chief designer. He not only created the sets for all of Vasilyev's important productions there — beginning with "Six Characters in Search of an Author" in 1987 and concluding with Vasilyev's last production at the School of Dramatic Art, "The Stone Angel" in 2008 — he rebuilt and redesigned the venues in which these works were performed. Popov worked with Vasilyev abroad, designing the director's famous productions of "The Masquerade" at the Comedie Francaise (1992) and "Uncle's Dream" at the Budapest Art Theater (1994). 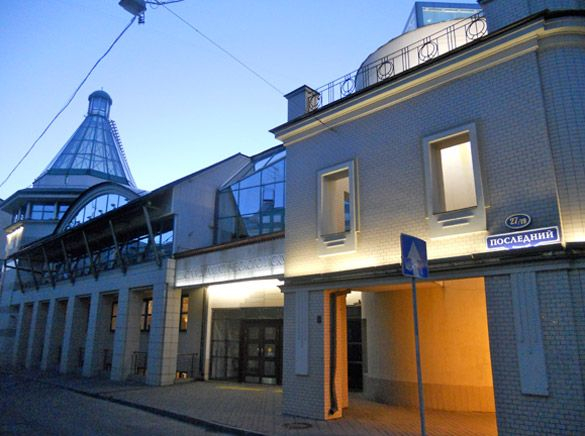 Popov's design of the School of Dramatic Art is a key cultural landmark.

If you have ever spent time in the School of Dramatic Art's small space on Povarskaya Ulitsa from 1987-2008 or in the large venue on Sretenka Ulitsa, opened in 2001, you have a clear sense of Popov's artistic vision — a spectacular mix of tradition and eclecticism, and an unerring sense of precision. Working with Vasilyev, Popov created a place whose walls, windows and doors are embedded with humor, majesty, spirituality, wisdom and deep humanity. In every turn the buildings take one feels the influence of intelligence and the touch of a human hand.

Popov was set for a professional reunion with Vasilyev, who left the theater he founded in 2008 following a rancorous break with city officials. Under the administration of Sergei Kapkov, the Moscow Culture Committee has returned Vasilyev to his original space on Povarskaya Ulitsa. Tenants who moved in when Vasilyev was expelled have been moved to other quarters, and plans are being made to reconfigure the space to suit Vasilyev in a new era.

Popov was to be part of this process. He had toured the old space with Vasilyev and the two were discussing changes and restorations.

Popov's death understandably affected Vasilyev deeply. The director on Jan. 2 posted a pained reaction to the news on the Facebook page of his wife Nadezhda Kalinina.

"Forty-two years together," he wrote. "From 'Solo for a Clock With Chimes' at the Art Theater to 'Therese the Philosopher' at the Odeon … A very close person left this life, my stepbrother in theater, an artist, an architect by the name of Igor — in the Slavic fashion, 'Blessed Prince.'"

The event also appears to have renewed a fighting spirit in the director.

Posting on Kalinina's Facebook page on Jan. 13, he brings up a conflict Popov had with management at the School of Dramatic Art over the redesign of a hall in the building on Sretenka Ulitsa. In order to clear the space on Povarskaya Ulitsa for Vasilyev's return, several productions by Dmitry Krymov were moved to the small Tau Hall on Sretenka, which was reconfigured against Popov's wishes.

Regarding the conflict, Vasilyev writes, "my mood and my determination do not differ from that of my friend and colleague, the chief designer of the theater and the architect of the building, Igor Popov."

But this is a prologue to a story that will concern the post-Popov era.