It became apparent that foreign economists and captains of industry view Russia's economy more positively than the country's officials, as they mingled and orated during the opening day of the Gaidar Forum in Moscow on Wednesday.

However, participants agreed that interdependence in the global economy is unavoidable.

Angel Gurria, the head of the Organization for Economic Cooperation and Development, or OECD, saw the broader economic situation as an engine of growth with four cylinders.

"I should say that this is a European car, because if it were an American car it would have eight cylinders, and it would be sucking a lot of gasoline, so this is only four cylinders, it is European," Gurria said.

The cylinders in his metaphor represent investment, trade, credit and the emerging economies, and they "are not working at full speed," he added.

The unemployment rate in Europe was 10 percent only four years ago, but now it is up to more than 20 percent in countries like Spain … and of those who are unemployed, more than half have been out of work for more than a year, Frenkel said.

Other speakers at the event agreed. "There is no great crisis here. The unemployment rate, budget deficit and poverty rate [Russia] has, the U.S. would happily trade for," said Jeffrey Sachs, Director of the Earth Institute at Columbia University, at a panel session. 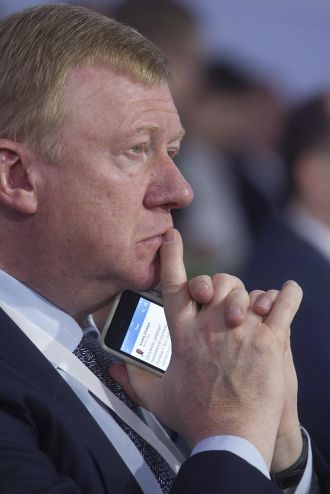 Anatoly Chubias at the forum.

Russia's per capita income, a measurement of purchasing power, is in the range of $20,000 to $24,000 dollars, which exceeds that of China's by more than two times, he said.

"It is a substantial increase from what it was 20 years ago, a tremendous accomplishment," Sachs said.

Despite an increasing disposable income, Russian officials were not upbeat about overall growth. "The growth rate for the Russian economy will not exceed 2.5 percent in 2014, and that will possibly be true for the following years," Economic Development Minister Alexei Ulyukayev said.

Meanwhile, forum attendees highlighted the fact that Russia's demographic challenges might be a blessing in disguise.

"In the next 20 years the world will have an additional 1.5 billion people. Most of them will come from emerging economies," Frenkel said, adding that this means that the action today has switched from industrialized to developing countries.

"I think that 7.2 billion people, soon to be 8 billion and then 9 billion is reckless for the world," Sachs said. "A stable population is good because that means there will be no unemployment crisis and massive infrastructure needs to compensate for rising population. The attention can be focused on quality, not quantity."

Russia's stable population level is beneficial for the world as well as for its own economy, Sachs said.

At the same time the country has a lot of what the world needs, he added.

"The world is resource-scarce and Russia is resource-rich. There is land to produce a lot of the food that the world needs and there is a lot of gas to power the world's economy, which will become more important for future years," Sachs said.

"If the world needs our resources we can provide them," First Deputy Prime Minister Igor Shuvalov said at a news conference following a panel discussion.

"But in the end, we should come to an economy less dependent on resource-based revenues and see profits originating in other sectors more," he added.

This will free more funds acquired from extracting and selling resources to be saved for future generations, Shuvalov said.

"Russia is now bound to develop in the knowledge-based economy. That means manufacturing with a heavy dose of technology, knowledge [complemented with] more and more services," he said.

Russia has a huge opportunity to lead the world in such sectors as aviation, aerospace, high-speed rail, nuclear power generation technology, robotics and heavy machinery, both Sachs and Gurria said.

Other highlights of the Wednesday's Gaidar Forum include:

• The Central Bank has no exchange rate target and is shifting toward a free float of the ruble to insulate the real economy from volatility on global markets, the regulator's First Deputy Chairwoman Ksenia Yudayeva said.

"We really don't have an exchange rate target — we are exiting the market," Yudayeva said.

The Central Bank has said it plans to shift to a full free float of the ruble by the start of 2015. This week it scrapped so-called targeted currency interventions in a technical step toward that goal.

"Targeting the exchange rate is incompatible with targeting inflation," Yudayeva said. "The country is experiencing stagflation," she added. 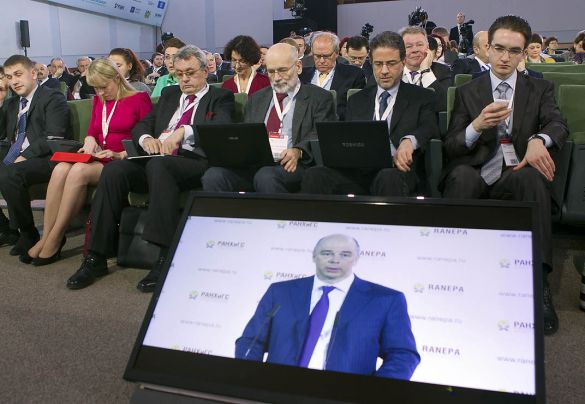 Finance Minister Anton Siluanov speaking at the Gaidar Forum on Wednesday as delegates study their screens.

• The federal budget in 2013 operated with a 0.5 percent deficit, which was less than the 0.8 percent that was planned, Finance Minister Anton Siluanov said.

• The Federal Property Management Agency will develop the technical parameters and format for privatization of national telecommunications company Rostelecom by April, when the company publishes its results for 2013, said agency chief Olga Dergunova.

The state controls 51 percent of the voting shares and 47 percent of the charter capital of Rostelecom. Sale of the state's stake could take place in 2014, Dergunova said earlier.

• The government will sell its stakes in state companies as soon as it gets good offers for them, but by 2020 the state should control no more than 25 percent of the overall economy, First Deputy Prime Minister Igor Shuvalov said.

According to various estimates the government controls about 50 percent of the economy, he added. Shuvalov also said that although the government could borrow money on international markets at favorable rates, it does not intend to.

• Prime Minister Dmitry Medvedev promised to personally oversee the creation of beneficial terms for those entrepreneurs willing to invest in the Far East.

Medvedev said there would be 5-year holidays on profit, property and payroll taxes for those investing in the region.