The U.S. State Department has issued a travel alert for Americans traveling to Sochi for the Winter Olympics and Paralympics as security threats continue to emerge in southern Russia, which is set to host the Games next month.

They discovered one in the regional center of Nalchik on Saturday, in a counterterrorism operation where five suspected members of an international terror group were detained, and the other one on Sunday in a car near a town of Tyrniauz, 90 kilometers west of Nalchik.

On Friday, six suspected terrorists were detained in the southern Stavropol region of Pyatigorsk, which allowed security forces to prevent a terrorist attack, the National Anti-Terrorism Committee said, without specifying where and when the attack had been planned.

On Wednesday and Thursday, police found six bodies with gunshot wounds and the same number of explosive devices planted in cars throughout the region of Stavropol, in what appeared to be a trap for law enforcement, Kommersant reported.

The discovery was followed by an announcement from FBI Director James Corney on Thursday that the U.S. will send two dozen FBI agents to Moscow, and another dozen to Sochi to help with security during the Olympics. The games run from Feb. 7 through March 15.

Despite the security boost, however, the State Department stressed on its website on Friday that personal security still depends very much on individual "good judgement and discretion."

U.S. citizens should "remain vigilant … when using any form of public transportation" in Sochi, located in the Krasnodar region, which borders the volatile North Caucasus federal district, the State Department said. 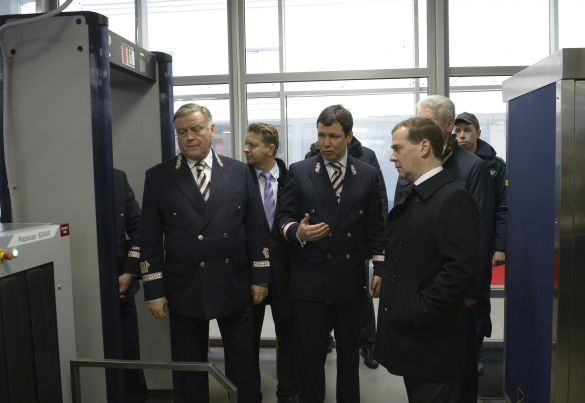 U.S. citizens are also highly recommended to subscribe to the government's Smart Traveler Enrollment Program in order to receive updates about security threats in the region through e-mail, or check regularly with the Embassy's or the State Department's website.

In addition, U.S. citizens should provide a friend, relative, or colleague a copy of their itinerary.

Although "Westerners have not been specifically targeted" in bombings in Russia in the past 15 years, rebels view them as "complicit in the Russian government's efforts to control" the North Caucasus region, where rebels in ethnic republics have been fighting for independence from federal authorities since the fall of the Soviet regime in 1991.

The State Department attributes its concern to the three deadly suicide bombings that took place in Volgograd, 965 kilometers from Sochi, between Oct. 15 and Dec. 30, as well as the appeal of rebel leader Doku Umarov in July urging his followers to attack the upcoming Olympics.

Continuous reports about detentions of suspected rebels or foiled bombings in the past few days have been further fueling the fears of U.S. authorities.

Russia seems to be fully aware of such fears, however, as it launched a massive security operation in Sochi on Tuesday, which includes ground patrols conducted by 37,000 police and military officers, surveillance from space, as well as monitoring of phone and Internet communications in the city.

Apart from terrorism, U.S. citizens risk falling victim to theft and robbery and therefore should not carry large sums of money around and use marked taxi services, and also store copies of important documents in a secure place, the State Department said.

Another danger for travelers is public demonstrations, which have the potential to abruptly turn violent, the statement says.

The statement also warned about poor healthcare, possible shortages of hotel rooms and against "promoting LGBT equality in public," for the latter may result in a fine of up to 100,000 rubles ($3,100), up to 14 days in jail or deportation.

Correction: The U.S. State Department's advisory to Americans traveling to Sochi is a travel alert, not a terrorism alert, as it was described in an earlier version of this story.