KIEV — As street protests in Kiev over President Viktor Yanukovych's U-turn on a planned deal with the European Union appear to be waning after several weeks of fervor, one sentiment voiced by pro-EU demonstrators is still ringing in analysts' ears: "The Soviet Union did not fall in 1991; it is falling now!"

The declaration sums up the goals and motivations of both sides of the protest perfectly: if the Ukrainian opposition manages to convince Yanukovych's government to move closer to the EU, Russia may see the last of its influence in the region go down the drain. If not, that influence may increase exponentially.

For many Ukrainians, the tug-of-war between Russia and the EU over Ukraine is pivotal in what they see as President Vladimir Putin's ongoing campaign to build a Soviet-style empire and keep a strong grip on former republics.

The Maidan protests have been emphatically anti-Soviet and anti-communist and have included dramatic, symbolic gestures like the trampling of Soviet flags.

In many ways, this is because Ukraine's political system itself still retains vestiges of the Soviet era, with regional governments resembling local branches of the Communist Party, said Konstantin Bondarenko, head of the Ukrainian Politics Institute.

Marat, a 30-year old unemployed protester, said that communism was "a satanic ideology that must be destroyed."

Yaroslav, 49, a businessman, shared Marat's sentiments toward the Soviet Union. He said his grandfather was shot by operatives of NKVD, the Soviet secret police, in 1941, and all men in his village were killed. His grandfather's family,  belonging to "an enemy of the people," were deported to the Urals in 1944.

Protesters in Kiev have also frequently expressed the belief that the Ukrainian president is merely a puppet of Russia's leader.

On Dec. 8, when protesters toppled Kiev's main Lenin statue on Bessarabska Ploshcha — a move that was largely symbolic for many — they shouted "Yanukovych, you're next in line."

Alexei Garan, head of the Kyiv-Mohyla Academy's Political Analysis School, said there are many former representatives of the Soviet establishment in the Ukrainian elite, including Yanukovych.

"Yanukovych is a product of the Soviet era and comes from a mix of intelligence agencies with criminal groups," he said.

The pro-Yanukovych anti-Maidan movement, which has held regular protests and even set up a tent camp in Kiev's Mariinsky Park, has touted Soviet heritage and the Red Army's role in World War II, resembling some pro-Putin rallies in Russia.

Garan attributed this lingering affection for the Soviet era to the fact that while in Central European countries de-Sovietization was a fast process, in Ukraine it has been more drawn-out and gradual.

Which is precisely why the Kremlin's bid for Ukraine to join the Russian-led Customs Union is viewed by many pro-EU Ukrainians with suspicion. Russia plans to expand the union to other former Soviet countries and to form the Eurasian Union with a high degree of economic and military integration, an ambition that has many in the West worried. 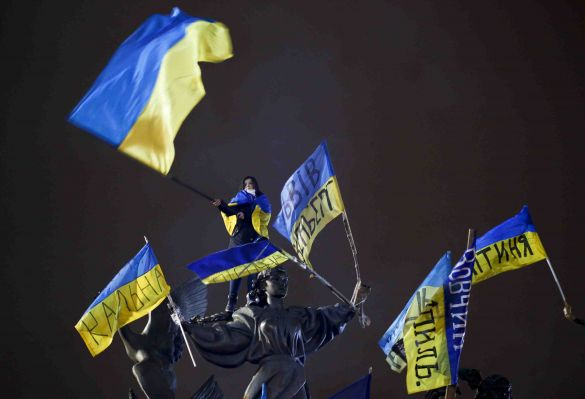 A protester waving Ukraine's national flag from the top of a statue in Kiev.

Giorgi Baramidze, a vice speaker of the Georgian parliament, said during a visit to the Maidan earlier this month that Putin was "trying to suck Ukraine into the quagmire of his empire" and compared Russia's pressure on Ukraine with the Kremlin's alleged aggression against Georgia in 2008. At that time, Russia and Georgia waged a war over the status of the latter's breakaway republic of South Ossetia, with some analysts accusing the Kremlin of trying to turn Georgia into a satellite of Russia.

But Baramidze said the "absurd idea of recreating the Soviet Union was stillborn from the beginning" and that Ukraine would not yield to the Kremlin's pressure.

"Without Ukraine, there will be no Eurasian Union," he said.

Former Georgian President Mikheil Saakashvili, who led the pro-Western Rose Revolution in Georgia in 2003, echoed Baramidze's assessment during a speech on the Maidan on Dec. 7, saying the Eurasian Union meant "slavery, corruption and authoritarianism."

He said the fate of all former Soviet countries and even the whole world depended on what was happening in Ukraine.

"Today you are the heart of European ideas, principles and values," he said. "You are defending not only your own future but also that of all freedom-loving peoples of this region and the world."

"Your victory will change Russia. It will reject imperialism and turn into a nation state that has … partners, not slaves," he said. "Ukraine's triumph will put an end to Vladimir Putin's era, and history textbooks will say that the Russian Empire ceased to exist on Maidan."

Putin has made no secret of the fact that he considers Ukraine and Russia to be intertwined in terms of national identity. At a NATO meeting in 2008, Putin famously told then-U.S. President George W. Bush that "Ukraine is not a real country," as Russia and Ukraine were so closely linked.

Ukraine is arguably more important to the fate of Putin's Eurasian Union now that Moldova and Georgia have moved out of Russia's orbit with an agreement on trade and political cooperation with the EU.

Last Friday, EU leaders sent a clear message that they recognized Russia's determination to maintain a strong influence by urging the former Soviet republics to sign the agreement as soon as possible to prevent the Kremlin from trying to get them to reconsider.

While some see Russia's $15 billion pledge to buy Ukrainian government bonds this week as a sign that Ukraine remains under the influence of the Kremlin, the Euromaidan movement has at the very least reinvigorated Ukraine's national identity — a move that may serve as the foundation for future opposition protests. The national flag has become the main symbol of the protests, while the country's anthem is sung every few hours on the Maidan

Paying respect to the country's history, protesters have also performed Ukrainian folk songs and dances, adorned their braids with traditional multi-colored ribbons and even worn Zaporozhian cossack costumes. Slogans, flags and songs linked to the Ukrainian Insurgent Army, a nationalist group that fought both the Nazis and the Soviets in the 1940s, have been especially popular.