In a defendant's cage in 2005, businessman Mikhail Khodorkovsky showed a sign through the bars that meant he would stay jailed for an eternity.

The former chief of what was once the country's biggest oil company, Yukos, was responding to a silent question from a Moscow Times reporter, who faced her notepad to the defendant after scribbling on the page "10?" in a query of how many years the prison term might be.

Shrugging, he thought for a second, then smiled ironically and drew the mathematical sign for infinity with his finger in the air, as a judge in a Moscow court droned through the sheaves of paper that contained the verdict in his first trial.

With recent reports of more charges for him on the way, his hunch did not appear improbable. But things changed abruptly on Thursday when President Vladimir Putin said he would soon pardon Khodorkovsky, who has become a symbol of the political risks of doing business in Russia throughout his 10 years in prison.

The surprise gesture of goodwill could be a lifeline for the country's global image, as it is drowning under torrents of bad publicity — on subjects like gay rights and rough treatment of Greenpeace activists — prior to the start of the Sochi Winter Olympics. Khodorkovsky is likely to walk free before the Games kick off Feb. 6, if the goal is damage control.

Khodorkovsky's prosecution in a case of fraud at Yukos, which was then Russia's biggest oil company, spooked businesses and earned him the title of political prisoner. It also heralded the era of a greater role for the state in the economy.

On his way out of the annual hours-long news conference in Moscow International Trade Center, Putin fielded one last question — off the air — about the tycoon. Putin replied that Khodorkovsky had filed a formal petition for pardon, something that his defense had long refused to do. Khodorkovsky asked for pardon on account that his mother is sick, Putin said.

A presidential decree to set the former businessman free will come out in the near future, Putin said.

"He has spent more than 10 years in correctional facilities," Putin said. "It is a serious punishment."

The question came from a reporter for LifeNews, a media outlet known for getting leaks from the Kremlin, raising suspicion that the scene had been staged.

"I am now making calls and finding out," his lawyer Yelena Lukyanova said, Dozhd television reported.

Other members of the defense team, Vadim Klyuvgant and U.S.-based Maria Logan, said the inmate made the move without their knowledge, RIA Novosti and Bloomberg reported.

The defense lawyers issued a statement later in the day, saying they had to meet with Khodorkovsky before commenting on whether he in fact requested a pardon and for what reasons. They added, however, that, "All of his family and supporters would, of course, be elated to see him finally free after 10 years of imprisonment."

Khodorkovsky and his defense had previously brushed off the idea of asking for pardon, as an action that would have essentially amounted to pleading guilty to the charges.

Khodorkovsky still has eight months left to serve of his jail sentence, which does not fall under the amnesty that the State Duma passed on Wednesday. 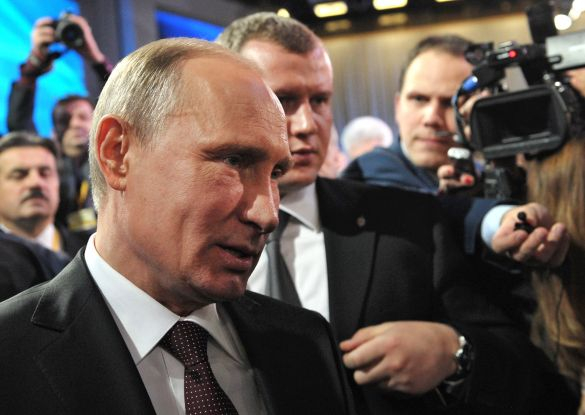 Putin speaking to reporters in Moscow after Thursday’s press conference.

Interfax reported later that prosecutors were looking into potential laundering of more than $10 billion that they considered stolen by Khodorkovsky. Some of the money could have paid for attempts to amend federal legislation, the report said.

The legislation-related charges appeared to refer to the analysis of the Khodorkovsky case by a team of economists and legal experts done at the behest of then President Dmitry Medvedev.

But Putin downplayed the possible ramifications of the new cases.

"To be honest, as a person looking from the outside at this, without immersing myself there, I do not see much in the way of prospects," he said at the news conference. "I heard people talking about this, but I do not see any threats for anyone there at this point."

Russia put itself on the spot by adopting a law to ban same-sex propaganda among children earlier this year. The presidents of the U.S., Germany, France and Lithuania refused to attend the Olympics in the Black Sea resort of Sochi. President Barack Obama instead is sending an unusually low-level delegation to the Games, but he is including two gay athletes in the group.

Further marring its international perception, Russia seized a Greenpeace boat that protested Arctic drilling and accused its crew of piracy.

Political analyst Stanislav Belkovsky, who in the early 2000s accused Khodorkovsky of plotting to overthrow Putin, said the release of the former Yukos chief could spruce up Russia's image in the eyes of international community at a time when world leaders spurn the event one after another. That must have come as a bitter pill to Putin who spent so much effort making the Games happen here in a bid to make Russians proud and show off the country to throngs of visitors.

"Putin wants to improve media coverage on Russia ahead of the Olympics," said Belkovsky, director of the National Strategy Institute, a think tank. He added that, "It has become clear recently that Putin is not afraid of Khodorkovsky anymore."

"It is likely that Putin made the decision … believing that such an unexpected move would persuade Western leaders to visit the Olympics."

Khodorkovsky once helped fund the now defunct liberal Union of Right Forces party, of which Nemtsov was a chairman.

Both Nemtsov and Pereverzin expressed doubt that Khodorkovsky actually wrote the pardon petition.

Sergei Zheleznyak, State Duma Deputy Speaker and member of the pro-Kremlin United Russia party, did not appear to question the existence of the petition, saying it represented Khodorkovsky's "recognition of his guilt and hope for President Putin's humanity, mercy and authority," Interfax reported.

Mikhail Yemelyanov, deputy head of a Just Russia party faction in the State Duma, said Khodorkovsky could further split the already fragmented opposition to the Kremlin, should he meddle in politics. That would play into the hands of the government, he said.

It is not the first time that news about Khodorkovsky's fate has been carefully timed.

When a court found Khodorkovsky guilty in a second fraud case in mid December 2010, the announcement of the verdict did not come out until the very end of the month. Many observers saw this as a stunt to reduce the amount of coverage of the ruling because media outlets usually ramp down operations around the New Year.

Police in Russia's Rostov region are searching for a suspected deserter from the Russian army who shot at police officers in the southern Russian city...
bare shelves

Russian bookstores have started removing LGBT-themed works from their catalogues after President Vladimir Putin signed a wide-reaching ban on expressions...
BEHIND THE LINES

Russia Firing Newly Made Missiles in Ukraine Despite Sanctions – Research