According to varying estimates, between 600,000 and 1.6 million people took to the streets in central Kiev on Sunday to protest Yanukovych's recent decision to suspend a planned association agreement with the EU in favor of closer ties with Russia.

Demonstrators seized City Hall and a trade union federation, turning the buildings into the "revolution's headquarters." They also set up a permanent tent camp on Maidan Nezalezhnosti and clashed with police near the presidential administration building, blocking access to it.

On Monday, protesters blocked access to the Cabinet building and effectively occupied the entire center of the city, setting up barricades on major streets and stopping traffic.

Putin spoke out against the ongoing protests in Kiev from Yerevan on Monday evening, calling the demonstrations an "attempt to shake the country's legitimate rulers," and accusing "outside actors" of playing a role, Reuters reported.

But while the Russian president hinted that outside forces were to blame for the disorder, protesters in Kiev directed most of their rage at him, scrawling anti-Putin slogans on many billboards and lamp posts in the downtown area.

Demonstrators blocking a street in central Kiev on Monday. Protesters occupied many streets in the city center, as well as government buildings.

Some protesters said Yanukovych was trying to copy Putin's purported authoritarianism, comparing the police's allegedly brutal actions on Maidan Nezalezhnosti on Saturday to the crackdown at an anti-Putin rally on Bolotnaya Ploshchad in May 2012.

Yanukovych, for his part, called for protesters to maintain peace, saying "any bad peace is better than a good war" in a television interview posted on his website.

Despite his words of peace, rumors were rampant at Monday's protest of a military invasion, and some demonstrators claimed that Russian special forces had been secretly transported to Ukraine.

Sergei Smolyaninov, a member of Sevastopol's city council in the pro-Russian Crimea republic, fueled the rumors by urging Putin to invade Ukraine.

Galina, 70, a pensioner, said Yanukovych would try to declare a state of emergency with Putin's help.

Andrei, 37, an engineer, echoed this sentiment, saying a Russian invasion would be Yanukovych's only chance of staying in power, adding that he was unhappy with Russia's meddling in Ukraine.

Andrei, who works at aircraft maker Antonov, said he was also displeased with Russia's reluctance to aid his company, which has a joint venture with Russia's United Aircraft Corporation.

Anatoly Zhovnev, 58, a businessman, said he objected to Russia's attempts to impose its "friendship" on Ukraine "by force."

Apart from being a protest against Putin's policies, the Ukrainian events were seen by many as an attempt to shed the Soviet mentality that the country shares with Russia and assert its own national identity.

"The current protests must put the post-Soviet mentality to death," said lawyer Zenon, 52, a Ukrainian-Canadian who emigrated to Ukraine. 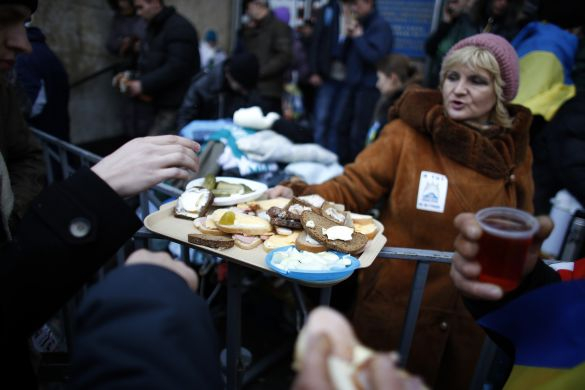 A woman distributing food and tea to protesters at Independence Square.

A similar idea was expressed in a poster that read: "Berkut riot police are a pro-Soviet junta, the youth is for Europe."

Nationalist sentiment was widespread, and blue and yellow Ukrainian flags were the main symbol of the protests, in contrast with the more sectarian orange color of the 2004 revolution. The flags could be seen everywhere in downtown Kiev as they were carried by demonstrators, attached to cars and hoisted from apartment buildings, while blue and yellow ribbons were tied to jackets, bags and women's braids.

Protesters also sang the Ukrainian anthem and chanted "Long live Ukraine, long live the national heroes!" The Ukrainian language, which usually competes with Russian in Kiev, was used by almost all demonstrators.

Though most protesters interviewed by The Moscow Times said they hated Putin's regime rather than Russia, students frequently derided their northern neighbor, jumping and chanting "Whoever is not jumping is a Russian."

Some commentators expressed a sense of solidarity with the Russian opposition, however, saying the Ukrainian protests could serve as a model for Russians and have an impact on Russian politics.

Zenon said he did not rule out a "spillover" of Ukrainian protests, in which students played a major role, to Russia and Belarus.

"If students get political in Moscow, it is game over for Putin," he said.

While many Ukrainian protesters put the blame for the current unrest on Russia on Monday, senior Russian lawmakers and ordinary Russians alike expressed the belief that European forces had staged the protests.

"I have just flown back from Kiev, and I have got the distinct impression that this is a well-organized event," Oleg Lebedev, first deputy head of the State Duma Committee for CIS Affairs, said of the protests in a phone interview.

Lebedev, a member of the pro-Kremlin United Russia party, visited the protests and said he saw people clearly fulfilling managerial roles for the demonstration, among them providing food for participants, directing speakers and handling "clashes with law enforcement officers."

"Young people in iron helmets and carrying metal rods acted as provocateurs," Lebedev said. "You understand that an iron helmet and rod cannot be found on a square during a peaceful rally," he said.

These signs show that "this involved rather big financial means," Lebedev said, adding that Ukrainian opposition leaders "could not have organized this with their personal finances."

As for potential "organizers" of the unrest, Lebedev noted that Lithuania had "called for the overthrow of Ukrainian President Viktor Yanukovych's regime," while Poland had five of its top officials "walk in front of the crowd at the rally," a reference to the fact that Poland's Vice President of the European Parliament Jacek Protasiewicz, Former Polish Prime Minister Yaroslav Kachinsky and three others had addressed protesters on Sunday.

Another sign suggesting that the protests were organized, he said, was the fact that they occurred right after the refusal of the Ukrainian leadership to sign an agreement with Europe, "which means that it was not a spontaneous demonstration."

Alexei Pushkov, head of the Duma's International Affairs Committee and member of United Russia, agreed that the protests had "sponsors."

Ukrainian "authorities have become a target of powerful pressure" from local political opposition, which is "attempting to repeat the scenario of the 2004 Maidan with support of sponsors from Europe and the U.S," Pushkov said in comments published on United Russia's website. 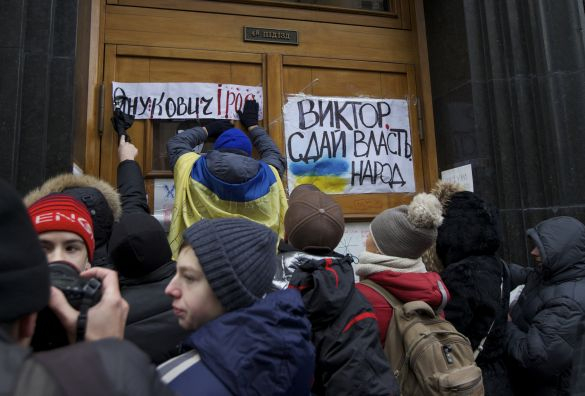 Protesters putting up signs telling Yanukovych to "give the power back."

Pushkov's claim is similar to those made during the 2004 Orange Revolution, when hundreds of thousands of people protested on Maidan Nezalezhnosti from November 2004 to January 2005 against perceived election fraud. The protests resulted in a repeat election that saw  Yanukovych lose power to Viktor Yushchenko.

At that time, many Russians accused Western forces of pulling the strings.

Vladimir Zhirinovsky, leader of the nationalist LDPR party and a State Duma deputy, said on Monday that there were more than just Western powers to blame for the current protests, however, saying that "the driving force" behind the riots were "alcoholics and drug addicts, as well as pro-Westernizers, spies and provocateurs," Interfax reported.

Communist Party leader and State Duma deputy Gennady Zyuganov said in a statement posted on his party's website Monday that "a number of facts unambigiously indicate the methods of Western spin doctors in organizing riots."

"What is happening has nothing to do with a popular revolution. Ukraine has encountered yet another round of spreading orange infection," Zyuganov said, referring to the 2004 Orange Revolution in Ukraine.

Ordinary Russians seemed to agree with lawmakers, with 54 percent disapproving of the protests in Ukraine, according to a public opinion poll conducted by employment agency Superjob among 1,600 people in all Russian regions on Monday.

Only 16 percent of the respondents approved of the protests in Ukraine, while about 30 percent said they were undecided, a poll published on Superjob.ru said. The poll did not indicate a margin of error.

Vladimir Zharikhin, deputy head of the Institute of CIS States, a government-linked think tank, said "direct involvement" of European parliamentarians "in the domestic affairs" of Ukraine was a "fact," given the participation of Polish parliamentarians in protests.

"Despite elements of organization, the overwhelming majority of people have come [to the rally] by an internal impulse," Zharikhin said in a phone interview.

Not everyone in Russia was opposed to the Kiev protests, however. About 10 anti-Kremlin activists, including RPR-Parnas party co-leader Boris Nemtsov, were detained by Moscow police for holding an unsanctioned rally outside the Ukrainian Embassy to demonstrate solidarity with the protesters.

"We absolutely peacefully stood near the embassy with a poster that read, 'Ukraine, we are with you,'" Nemtsov told Interfax by phone from inside a police van. "We are also in favor of a European choice for Russia — it is absolutely natural. Both Russia and Ukraine are integral parts of Europe."