A Transaero Boeing 747-400 jet painted with dozens of colorful handprints from prominent personalities made the "Flight of Hope" from Moscow's Vnukovo Airport on Saturday, the airline said.

About 200 passengers on the flight contributed a total of 100,000 rubles to Life Line, a Russian charity that assists children with serious heart, brain and spinal diseases. Passengers could choose to donate through onboard wi-fi services or text messages.

"The first Flight of Hope proved that Transaero's passengers are truly open-hearted and empathetic," the airline said in an e-mailed statement. 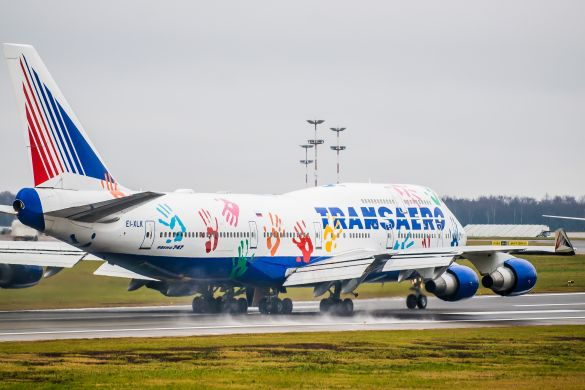 Other people have also contributed to the project, including U.S. company Midair USA, which painted the jet's fuselage with the handprints at no charge.

Transaero is the first Russian airline to promote charity among its passengers. The campaign could prove challenging in a society that lacks a tradition of contributing to causes and sometimes looks at charities with suspicion.

Life Line has raised about $42 million in corporate and private donations for operations on more than 6,140 children around Russia, the airline said. The charity works with children aged up to 17 and directs 100 percent of donations for treatment, it said.

Airlines in other countries have encouraged charity for some time. British-based EasyJet, for one, has used video appeals onboard its aircraft to seek donations from passengers, while Spain's Iberia has put donation envelopes in its seat-back pockets.

The specially painted Transaero jet will be operated on key business and premium vacation routes in the future, the airline said.