When a young Interior Ministry intern from Volgograd decided to build a house for himself, he chose unlikely construction materials — recycled plastic bottles — for the project. But eight years later, that gamble has paved the foundation for his own eco-conscious business as well as garnered him nationwide praise.

Roman Sebekin, 28, was among the seven finalists in the Moscow leg of the Global Student Entrepreneur Awards, which were presented earlier this month. His Volgograd-based company, Plastika, converts plastic waste into building materials, such as polystyrene blocks, polymer tiles and flooring.

"The only way to convince a person that a block made out of processed plastic is ecologically safe and good to use is by relating my personal experience," Sebekin said, describing how he turned his home building project into a full-fledged business.

Originally an economics and law student, who had a long-term internship at the Interior Ministry's tax crime office, Sebekin decided early on that he did not want to work in the public sector.

He got the idea to start an eco-business when he researched what types of materials he could use to build his own house. Those made from recycled plastic were cheaper but also of good quality.

It took 100,000 rubles ($3,100) to purchase the necessary processing equipment and conduct experiments to refine the recycling practices. Once the business was off the ground, the orders started coming in not only from Volgograd but from across the country.

Although the enterprise had a low start-up cost, it has not been an easy one to manage. Sebekin said that the business is still not bringing much revenue and most of the money it does earn is redirected back into research and development. 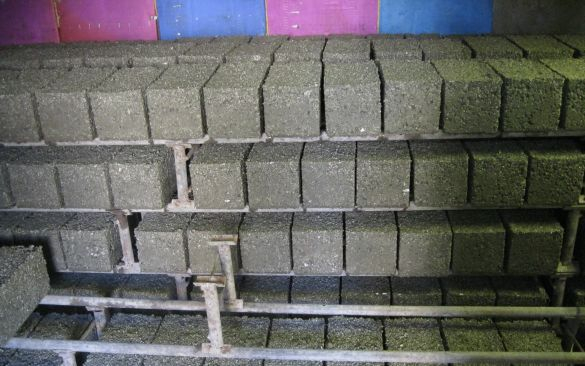 Polystyrene blocks are shipped to eco-savvy builders across Russia.

Collection of recyclable plastic is one of the central challenges for Sebekin. Some local organizations willingly hand over their plastic waste, but others, such as Eldorado home appliances store, have refused to do so for free.

Sebekin's company set up containers in an area of Volgograd to collect plastic waste from locals. Almost half of the containers, which other recycling projects have discovered can be used for breeding rabbits or chickens, were stolen. Each container costs 1,500 rubles and Sebekin said they struggle to compensate the losses.

He has turned to the government for help but with no result. The government does not want to work with them because there are no laws yet in place to regulate the eco-business sector, Sebekin said.

"Everyone claps you on the back. They say, excellent, super! You are so great! Contact us — we will help," Sebekin said. "We turn to them and they reply that, sorry, we do not have a budget for this. We do not have anything. We cannot help you."

Sebekin met a similarly disappointing end at the Global Student Entrepreneur Awards. Ultimately, it was the project of a 28-year-old entrepreneur from Novosibirsk that won first prize in the competition.

Irina Mirzoyeva, a scientist from the Space Research Institute and Sebekin's partner in Moscow, called this victory an ironic, though expected, outcome. Ironic because the winner, Vadim Kulubekov's company Avista Modul, builds temporary housing for the workers of resource extraction companies, including RusHydro and Severstal.

But the loss at the entrepreneur awards did not crush Sebekin's enthusiasm. The young businessman is now looking for ways to open a production facility close to Moscow to supply that market.

This would also be the impulse to start eco-construction, particularly that of government provided housing, in the region. Sebekin said that the prices for housing made out of recycled materials can be five times lower than the current market prices.

"We need to be in Moscow," he said. "There is a big problem here and we have a social mission. Moscow dumps are overfilled."

The Arctic is warming roughly three times faster than the planet as a whole, the Climate Crisis Advisory Group said.