Greenpeace activists took to the Moscow River in a motorboat on Wednesday in support of the Arctic Sunrise's multinational crew, whose detention in Russia was discussed on the same day at a maritime tribunal in Germany.

The activists sailed past the Kremlin holding yellow flags which read, "Free the Arctic 30," referring to the 30 crew members who are being held in Murmansk after being charged with hooliganism for staging a protest at the Russian-owned Prirazlomnaya oil platform in September.

"We ask all of those who care to join the movement in defense of the detainees, and together with us demand their quick release," Greenpeace said Wednesday in a statement.

The International Tribunal for the Law of the Sea, based in the German city of Hamburg, on Wednesday considered the Netherland's request for the crew of the Arctic Sunrise, which sails under the Dutch flag, to be released. The Dutch Foreign Minister Frans Timmermans said that he expects a ruling to be delivered on Nov. 21, Interfax reported. 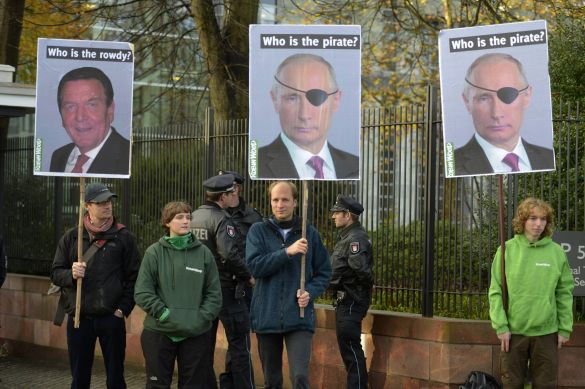 Demonstrators from a German environmental organization holding up protest posters in Hamburg on Wednesday.

The tribunal adjudicates maritime disputes under the 1982 United Nations Convention on the Law of the Sea, to which both Russia and the Netherlands are party.

However, the Russian Foreign Ministry last month refused to recognize the tribunal's authority and said that Russia plans to press ahead with plans to prosecute the activists. As such, Russia didn't participate in Wednesday's hearing.

"This is a big problem, but we have to start the proceedings, even without the participation of Russia," tribunal chairman Shunji Yanai said.

Greenpeace International's general counsel, Jasper Teulings, said his organization is confident that the tribunal will take into account the fundamental rights of the crew and deliver a fair verdict.

The Netherlands ultimately thinks the fate of the activists, who are being held in custody in Murmansk, could be resolved outside of court. Timmermans said that the Dutch we involved in "informal negotiations" on the subject, but was unable to give further details for fear of compromising the talks.

Authorities in North Ossetia ordered a restriction of car travel to the Russian republic that neighbors Georgia on Wednesday, after tens of thousands fled...