Despite a complete change of leadership in Georgia sealed in Sunday's presidential election, Russia and its southern neighbor remain on track only to crawl toward a strained reconciliation, due largely to the legacy of the bitter five-day war that the countries fought in 2008.

Mikheil Saakashvili, Georgia's relentless modernizer known for his quirky use of language, will be replaced Nov. 17 by Georgy Margvelashvili, a university administrator and expert in philosophy and international relations who won the presidency Sunday with 62 percent of votes.

Saakashvili's presence at the helm of the Georgian state was often cited by Russian leaders as the main barrier to improvement of relations between the two states, while the recognition by Russia of Georgian breakaway regions Abkhazia and South Ossetia is a major sticking point for Georgia's government.

Following the announcement of election results Monday, Margvelashvili gave assurances at a news conference that "there will be no aggression from our side — Georgia will be constructive with regard to Russia."

But he also stressed that Georgia will continue to "stay firm in the question of its territorial integrity, the issue of nonrecognition of Georgia and South Ossetia."

Russian Foreign Minister Sergei Lavrov, speaking in the southern Russian city of Rostov-on-Don, congratulated the Georgian people on the "free and fair election" and expressed his hope that the new government will "adopt a friendly policy toward Russia, one that will take into account the current situation in this complex region."

That rhetoric is a far cry from what was said by leaders of the two countries in the wake of the 2008 war, in which Russian troops entered South Ossetia to fight Georgian forces that were shelling the region.

Much of Russia's anger seemed to fall on Saakashvili, with Vladimir Putin, then prime minister, telling then-French President Nicolas Sarkozy in August 2008 that he would "hang Saakashvili by the balls," a Sarkozy advisor told a French magazine at the time. Putin's spokesman later denied that he had used those words.

Saakashvili was quick to respond with similarly graphic language, saying, "We should not be naive, and we should not think that we may get some concessions from Russia only if we — if you will pardon the expression — lick them in a certain place, as some propose we do."

The tense atmosphere led to a complete halt in bilateral relations, a situation eased only after billionaire Bidzina Ivanishvili, who acquired most of his wealth in Russia, stepped into Georgian politics and defeated Saakashvili's United National Movement with his Georgian Dream party in October 2012 parliamentary elections. 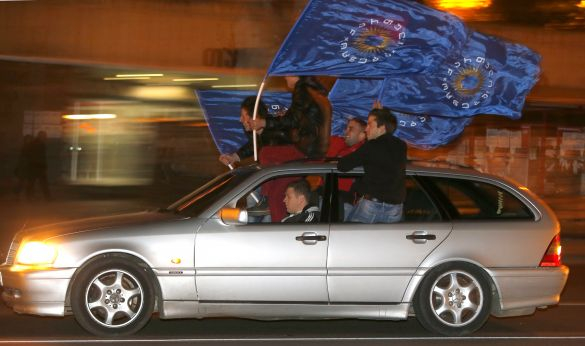 Ismail Agakishiyev, the head of the Caucasus Research Center at the Russian State University for Humanities, said Monday that the legacy of the 2008 war would linger over bilateral relations despite the change of leadership.

"Any government that comes to power in Georgia will have to pledge that it will spare no means to reintegrate Georgia's lost territories," he said in a phone interview.

Russian border guards have recently started to install a barbed wire fence between South Ossetia and the rest of Georgia, a sign of Russia's entrenched position in the region.

Other analysts noted that despite Georgia's softening rhetoric toward Russia, the country's overall orientation will remain the same: It wants closer ties with Europe and NATO.

Next month, Margvelashvili is set to sign an association agreement with the European Union, thus sealing the country's course toward Europe.

"There is very little space left for Russia in Georgia's foreign policy," said Vladimir Khomeriki, president of the Russian-Georgian Unity Fund. "We should not forget that the new president worked in an institution funded by George Soros, so a pro-American attitude endures."

Khomeriki said Russia should expect a new opposition force to emerge in Georgia, one that will "make its foreign policy respond to the genuine desire of the Georgian people — a closer rapprochement with Russia."

In 2010, the Georgian parliament passed amendments to the constitution effectively transforming the country from a presidential to a mixed parliamentary system of government. The changes will come into force with the new president's inauguration, significantly reducing his powers.

Given this situation, incumbent Prime Minister Ivanishvili will formally become the most powerful figure in the country, although he has repeatedly promised to step down in favor of a member of his cabinet.

"The next prime minister will be an important figure, but we know that he will come from Ivanishvili's team," said Agakishiyev, of the Caucasus Research Center.

Nikolai Silayev, senior researcher at the Caucasus Center at the Moscow State Institute of International Relations, said that despite the election result, he did not believe there would be a sudden reset in relations.

"Normalization of ties will be a slow process," he said.