Thousands of people marched along the Boulevard Ring in central Moscow on Sunday in support of suspects in the Bolotnoye case and other people they deemed to be political prisoners, but the turnout was smaller than at major opposition rallies held earlier this year.

The protest movement appears to have subsided somewhat since an upsurge in activity triggered by the Moscow mayoral campaign from August to September, when popular anti-Kremlin leader Alexei Navalny conducted a strong grassroots effort and placed second in the Sept. 8 vote.

The smaller turnout Sunday may also have been due to the fact that the march was not linked to any major event, such as an election, and that many protesters have gotten tired of rallies that do not seem to yield immediate results. Some observers have additionally argued that a Kirov court's decision earlier this month to commute Navalny's five-year prison term on embezzlement charges to a suspended sentence assuaged protesters' concerns.

The police, who are known for giving derisory estimates of the turnout at opposition rallies, said 4,500 people attended the protest, while Ilya Yashin, an activist with the liberal RPR-Parnas party, said there were "at least 20,000" people at the rally.

Navalny told Dozhd television at the event that it would take longer to change the political system than many had thought, after tens of thousands of people took to the streets in December 2011 to protest purported fraud in parliamentary elections.

"Back then everyone thought that Putin's regime would not last longer than 1 1/2 years," Navalny said. "But the truth is that we need to prepare for a longer, more exhausting and more intellectual struggle."

The main theme of the march was support for 28 suspects in the investigation into an opposition rally on Bolotnaya Ploshchad in May 2012 that ended in violent clashes between protesters and police. Three of those accused in the case have been convicted on various charges. 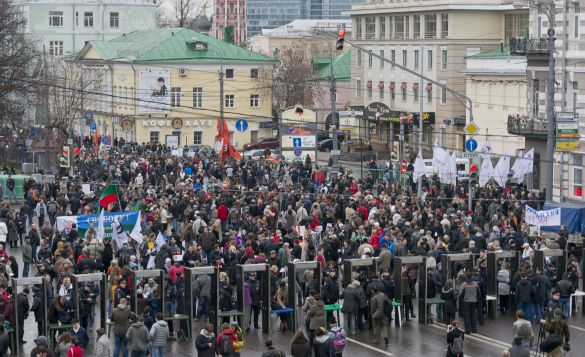 Protesters passing through metal detectors near Pushkin Square at the starting point of Sunday's march.

Some demonstrators held pictures of the suspects, while others collected donations for them and signatures in support of an amnesty for those implicated in the case. Pavel Krasheninnikov, head of the State Duma's Legislation Committee, said in September that they could be included in the Dec. 12 amnesty devoted to the 20th anniversary of the Constitution, and the Kremlin is currently considering the proposal.

One protest attendee, pensioner Vladimir Slutskin, said an amnesty was unlikely "under this president."

He said he did not expect the march to have a major effect but attended opposition rallies nonetheless. "What else can I do, as a voter?" he said. "I cannot pick up a brick, though the time for that might come."

Another march-goer, Alexander Kazakov, argued that an amnesty for the Bolotnoye suspects was realistic.

He said he thought the authorities' decision earlier this month to sentence one of the accused, Mikhail Kosenko, to treatment at a minimum-security psychiatric asylum was a relatively mild penalty and represented a more lenient approach. Some opposition activists have voiced the opposite sentiment, saying the sentence was effectively life imprisonment, since there is no fixed term for his treatment.

Kazakov also carried a poster that read "Do not divide Biryulyovo and Bolotnaya" — a reference to an anti-migrant riot in Moscow's Biryulyovo neighborhood earlier this month.

Explaining the poster's message, he said that both the Bolotnaya rally on May 6, 2012, and the Biryulyovo protests were caused by legitimate grievances and aimed at changing the political system.

"The protest movement should not be split into tiny groups," he said.

Apart from the Bolotnoye case suspects, other people protesters believed to be political prisoners were featured on posters and banners, including businessmen Mikhail Khodorkovsky and Platon Lebedev; members of punk group Pussy Riot; the 30 people arrested on a Greenpeace ship last month for their protest of Arctic drilling; and former Yaroslavl Mayor Yevgeny Urlashov.

Another topic that featured prominently at the rally was purported parallels between President Vladimir Putin and Soviet leaders.

One protester held a poster that said Lavrenty Beria, the head of Josef Stalin's secret police, "has been resurrected, wait for an arrest." Another read: "Stalin is alive in Putin's clothes, son of an [expletive]." One attendee carried a portrait of Putin in Brezhnev's military uniform.

In Prague on Friday, anti-communist activists played on a similar theme, setting up a gigantic poster with Putin in Stalin's uniform at the former site of the world's largest Stalin monument, demolished in 1962.

Disaffection with the president's policies was intense, with one protester calling for "hanging Putin from the yardarm."

A less prominent issue at the rally was unhappiness with the recent decision to merge the Supreme Court with the Supreme Arbitration Court, what some see as an attempt to cement the Kremlin's hold on the court system.

Like many previous protests, the rally featured some bizarre quirks.

Buddhists beat drums and throat-sang a song in an unknown language that a bystander jokingly translated as "Free Khodorkovsky," while one protester held up a poster featuring a pig in a judge's robe with the words "the symbol of Russian justice."