A small Montenegrin fort town on the shore of the Adriatic is now seeing a wave of Russian real estate buyers as its latest invaders.

Founded originally as a Bosnian fort in 1382, Herceg Novi has since played host to Ottoman Turks, Spaniards, Venetians, Dalmatians, Russians, Italians and any number of Balkan armies, all of which have left a unique and indelible mark on the look and atmosphere of this small fishing town whose population numbers 13,000. Its latest occupation, however, that of wealthy Russian property buyers looking for an escape from the stress of the city, is proving a more welcome one.

One such refugee, Olga Ogneva, 30, a freelance photographer, has swapped a life spent amidst the frustrations and traffic of Moscow to one where she can commute between cities by bicycle. "From the start, my stomachache due to eating Moscow food every day cleared up," Ogneva said. "My nerves settled. The pleasant climate, the sea, the mountains, the delicious natural food, plus the people, have all given me a peace of mind and a true enjoyment of life that I never knew in Moscow."

Attracted by plummeting property prices, Russian buyers are making their way to the tranquil Adriatic coast in droves. According to local real estate agency Adriatis, about 10 percent of property in Herceg Novi is owned by expatriates, about 6.5 percent of which are Russians looking for an escape from harsh winters and traffic-choked streets. Less affected by the economic slowdown, Russian buyers have been quick to fill the gap left by nervous Western investors. With properties starting from as little as 40,000 euros ($53,000), it is clear why. "The main peak was from 2006 to 2009," Adriatis' general director Alexander Ivanov said. "Currently, the price level of real estate in Montenegro has declined, with average prices in Herceg Novi standing at about 1,200 to 2,500 euros per square meter. Certainly there are cheaper and more expensive properties, but that depends on other factors, such as location. The fact is that for 2 million to 2.5 million rubles you can own an apartment on the sea."

Veselin Dragas, head of real estate company Forte Mare, sees cultural and historical affinities also driving Russian interest. "The local people like the Russians," he said. "We have similar languages, and the Orthodox Church. They blend in." 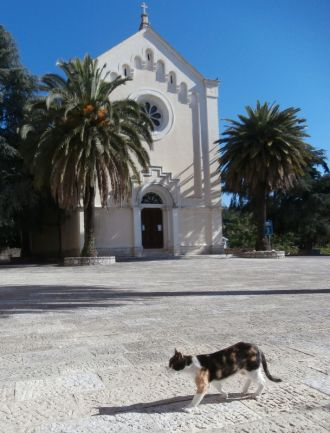 "There are some associations where Russian people meet to talk, dance, watch movies, and so forth," Ivanov added. "For those who want to plunge deeper into the life of Montenegro there is a Montenegro-Russian Friendship Society in Herceg Novi called Zajedno-Вместе, or Together, which arranges thematic meetings every Sunday, travel trips around Montenegro, photo exhibitions of young Moscow photographer Leonid Mikhailov and meetings of the leaders of women's organizations of Russia and Montenegro."

The process of buying property is straightforward. "It is a relatively simple process. All you need to do is just go to any real estate agency and make a request," said Vera Silvanskaya, a teacher from Moscow. "They showed me all the possible options in different places in the country, so that first I chose the town and then I checked all the available apartments in that particular place. The notary work was also very simple."

As a result of the relatively low degree of development of the Montenegrin mortgage market, although loans up to the value of 60 percent to 70 percent of the property value are available, sellers are sometimes prepared to accept payment in installments.

Certainly, with its ever present army of somnambulant cats and white, narrow stone steps leading down to crystal clear Adriatic waters, Herceg Novi makes a tempting proposition at any price.