Oh what a difference a year makes.

It was only a year ago that a visit to the car dealer meant waiting for weeks — and sometimes months — for your new wheels to be delivered from the factory.

Cars are standing unsold at dealerships as Russians, spooked that the slowing economy might signal a 2008-style crisis, are putting off the decision to replace their cars or buy a first vehicle.

As a result, car sales will slide by 7 percent in 2013 and by as much as 10 percent next year, a conference of Russian car dealers heard Thursday.

He and other industry players linked the declining sales to widespread uncertainty about the Russian economy, which is forecast to grow by 1.8 to 2 percent this year, compared to 3.5 percent in 2012.

Asked by a conference participant to predict Russia's economic growth for next year, Rakhmanov paused and smiled faintly. "If I knew what the price of oil would be in six months, then I would make a prediction," he said as the audience tittered.

Indeed, oil, which together with gas drives Russia's economy, plays a role in determining car sales.

Russian car sales have risen and fallen in line with the price of oil for the past 17 years, according to data by Autostat, an automotive research agency. Curiously, oil has remained stable in recent months, even as car sales have continued their slide. 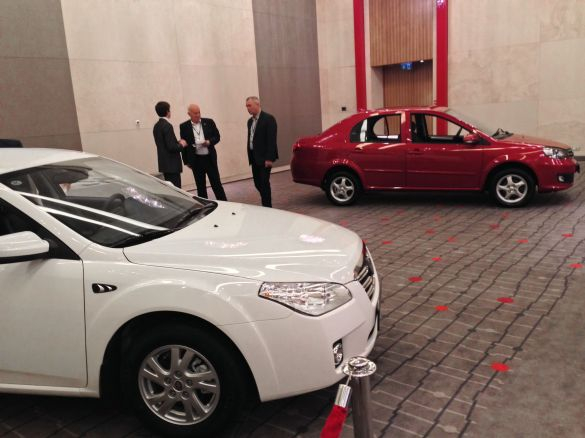 Car sales fell 6.8 percent in the first nine months of the year compared to the same period in 2012, according to Autostat. That puts sales on track to decline 7 percent for the year, said Oleg Datskiv, director of development at Auto-dealer.ru. Datskiv, who noted that he had predicted the 7 percent downturn at the same conference last October, said 2014 was shaping up to look grimmer, with sales likely to plunge by 10 percent.

A show of hands by conference participants indicated that most believed that sales would fall next year. But at least one car dealer said a slight uptick could take place if the news media refrained from scaring consumers.

"All we heard in 2009 was 'crisis, crisis, crisis,' and sales dived," said Ilya Pimenov, managing director of Business Car, which sells Toyota and Lexus models.

"If there is no bad press, then there will be a little growth in 2014," said Pimenov, who also serves as vice president of the Association of Russian Automobile Dealers, or ROAD, which organized Thursday's conference.

The decline in sales is sending a sharp jolt through an industry that has enjoyed soaring revenues from a swelling Russian middle class. The 2008-09 crisis aside, the domestic market has seen unparalleled growth that earned it the distinction of the fastest-growing car market in Europe. 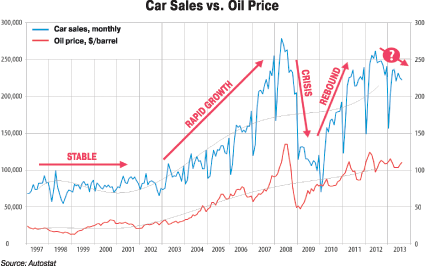 But only three of Russia's 83 regions saw a growth in sales in the first nine months of 2013: Rostov, with 3.5 percent growth, or total sales of 54,800 cars; Bashkortostan (3 percent, 71,000 cars); and Tatarstan (1.1 percent, 91,600 cars), according to Autostat. The modest growth can be attributed to a relatively low starting base and, in the case of Tatarstan, regional government policy, market players said.

Sales in Moscow, the country's largest market, fell by 8.2 percent to 273,900 cars over the same period, while the Kemerov region saw the sharpest drop, with sales tumbling by 20 percent to 29,400 cars.

While sales to private individuals have steadily fallen, corporate car purchases have accelerated. For example, year-on-year sales of corporate cars rose by 7.4 percent in September as private sales fell by 9.5 percent, Autostat said.

Only the SUV segment is seeing any growth, it said. Also, Autostat said the average price for a new car has risen to 900,000 rubles.

Other than hoping for high oil prices and an absence of bad news in the media, car dealers offered a mixed bag of ideas on how to spur sales.

Many said matters could be worse. Igor Korovkin, managing director of the Association of Russian Carmakers, said domestic producers were relieved that Russia's entry into the World Trade Organization last year had not had any impact — positive or negative — on the market.

Nikolai Skoptsov, sales manager for Moscow-based Avtoval Motors, took a break from showing off two gleaming Chinese-made FAW sedans at the back of the conference hall in the Swissotel to say his biggest challenge was convincing Russian consumers that the Chinese build reliable cars.

"Russians have this mentality that the Chinese build junk," Skoptsov said. "But this is not true."

But perhaps a bigger challenge for dealers presented itself moments later when the CEO of a car parts company in Bryansk, about 380 kilometers southwest of Moscow, marched up to Skoptsov and demanded to know why no one was picking up the phone at FAW's local dealership. "I have been thinking about buying a FAW, but every time I call, no one answers," he said.

Skoptsov winced and, pocketing the executive's business card, promised to look into the matter.

Kristina Timanovskaya said team officials had tried to remove her from Japan after she criticized Belarus's athletics federation.
church and state

Putin and Sechin can be seen touring the monastery’s main cathedral, which recently underwent a Rosneft-financed restoration.
tokyo olympics

Russia to Invest $1M in Independent Media in Developing Countries

The investment comes amid criticisms that Russia is suppressing independent journalism with increasing frequency.