Police on Tuesday detained the suspect in a killing that provoked a wave of ethnically charged riots in Moscow's Western Biryulyovo district on Sunday.

The alleged murderer, Orkhan Zeinalov, 30, who came to Moscow more than 10 years ago from the former Soviet republic of Azerbaijan, was detained 100 kilometers from the capital in the town of Kolomna and brought back to Moscow by helicopter.

The Investigative Committee promptly announced the detention on Twitter, perhaps in a bid to prevent further protests from erupting on the Muslim holiday of Eid al-Adha.

"We caught him. In Kolomna," the Twitter message read.

"Zeinalov put up resistance during the detention, but the policemen involved were not harmed," the Interior Ministry told Interfax.

Zeinalov is suspected of stabbing Yegor Shcherbakov, 25, on Thursday night after the pair got into a dispute that began after Zeinalov harassed Shcherbakov's girlfriend in front of the entrance to their apartment building.

The killing triggered a series of mass protests in which many Biryulyovo residents put the overall blame on the increasing presence of migrants from the Caucasus and Central Asia, who they say have begun to dominate a local vegetable warehouse.

Zeinalov worked at the vegetable market and warehouse along with his relatives, who were also detained Tuesday.

Alexei Pronkin, who was renting Zeinalov a room in his three-room apartment, said the last time he saw the suspect was Monday night.

"We watched photos and videos [of the suspect] online and joked about whether it was Zeinalov. He laughed with us and then went to his room. Then he came out and said he needed to leave for a couple of days to get some merchandise," Pronkin told the Lifenews online television channel.

After Zeinalov left, Pronkin and his friends watched the video again in a better quality and recognized the suspect pictured as Pronkin's roommate, leading the men to report the revelation to the police.

Zeinalov's friend, Rustam Mamedov, said he never expected that Zeinalov was capable of killing someone, and that Zeinalov's habit of getting drunk was the only explanation for his actions. 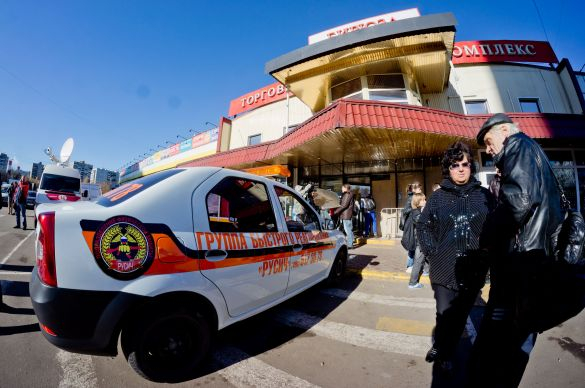 Biryulyovo residents standing in front of the Biryuza shopping center the day after it was targeted by rioters.

"When he drank, he was not quite right in how he treated girls," Mamedov told Lifenews.

Zeinalov came to Russia from Baku, the capital of Azerbaijan. In a strange coincidence, Russia's national football team played against Azerbaijan on Tuesday night in a decisive match that could see Russia qualify for the 2016 World Cup.

Ahead of the match, representatives of both teams exchanged heated comments over who would win.

The situation in Moscow was equally tense, with police tightening security to ensure that the celebration of Eid al-Adha went smoothly Tuesday.

Perhaps in a sign of nationalist outrage over the killing in Biryulyovo, however, hackers defaced several prominent Russian-language Muslim websites Tuesday afternoon, posting a picture of a pig swallowing a copy of the Quran.

Rushan Abbyasov, deputy head of the Council of Muftis of Russia, whose website was also attacked, warned that such acts can only deepen rifts among Russia's diverse ethnic and religious groups.

"This act can only benefit Russia's enemies, who have no idea about their country's history and culture," he said. "We already know where the attack came from and are working with law enforcement agencies to hold the perpetrators accountable."

President Vladimir Putin expressed solidarity with Russia's Muslim community, saying in a message to mark Tuesday's holiday that "significant attention is always paid to strengthening constructive cooperation with the state and to improving fruitful dialogue between the adherents of Islam and those of Russia's other traditional religions."

More than 100,000 people took part in celebrations to mark the end of Hajj, a yearly pilgrimage to Mecca, occupying streets surrounding Moscow's Cathedral Mosque in the vicinity of Prospekt Mira.

One of the participants in the celebrations, Ali, 30, said he had heard about what happened in Biryulyovo but was not worried for his own safety.

"I do not think I should worry. This is our great feast, and we cannot darken it with fears," he said in front of a giant new mosque being constructed in the area.

In parallel with the Muslim celebration and despite the arrest of Zeinalov, however, 50 young men were detained Tuesday evening at Prazhskaya metro station, the closest one to Biryulyovo, after trying to stage a nationalist rally.

A police spokesman told Interfax that police were "keeping the situation under control" after the detentions.

The closed town of Severomorsk, population 50,000, houses the Russian Navy’s Northern Fleet in the Arctic Circle.
evading the system

U.S. Funds Software for Russians to Slip Past Censors

The U.S .government-backed Open Technology Fund estimates that some 4 million users in Russia have received VPNs from the firms Psiphon and nthLink.
Spy case