BAKU — Luxury cars cruise down "Oilman Avenue" past five-star hotels and exclusive boutiques in the capital of Azerbaijan, where President Ilham Aliyev looks sure to be re-elected Wednesday.

While residents of cramped apartments in drab Soviet-era blocks on the outskirts of Baku may feel excluded from the oil boom that has transformed smarter parts of town, opponents of Aliyev, 51, say controls on dissent mean they have little chance of stopping him from winning a third five-year term.

That will extend a dynastic rule under which he and his father, former Communist leader Heydar Aliyev, have ruled the mainly Muslim state since 1969, except for a period from 1982 to 1993. Opinion polls show him clearly in the lead.

Azerbaijan holds a presidential election Wednesday that looks certain to give Ilham Aliyev another five years in power, extending his family’s rule in the oil-producing state.

Ilham Aliyev, 51, was first elected president in October 2003, as the handpicked successor to his predecessor, his ailing father Heydar, who died two months later. He won 76 percent of the vote in 2003 and was re-elected in 2008 with 89 percent. Both elections were criticized by Western monitors.

A personality cult around Heydar Aliyev continues 10 years after his death. Portraits of both Aliyevs hang in the offices of most Azeri public buildings. The president has ordered that portraits of himself be removed during election times, but they remain a common sight.

Per capita GDP increased to $7,850 in 2012 from $850 in 2003. Aliyev has overseen the construction of oil and gas pipelines that deliver Caspian oil and gas to Europe. The Baku-Tbilisi-Ceyhan pipeline, which his father helped build, was one of Azerbaijan’s first efforts to bypass former Soviet master Russia to access world energy markets.

Human rights groups have repeatedly criticized the record of Aliyev and his father. But Azerbaijan’s strategic location, for energy exports to Europe and as a transit route for U.S. troops to reach Afghanistan, has cushioned it from Western criticism, rights activists say.

Fluent in English, Russian, French and Azeri, Aliyev has a Master’s degree in history and international relations from Moscow State Institute of International Relations. He is married with two daughters and a son.

Located between Iran and Russia, Azerbaijan is a vital energy supplier to Europe and a transit route for U.S. troops in Afghanistan. Critics say this has made the West turn a blind eye to shrinking freedoms since Aliyev came to power in 2003.

A new generation of Internet users, inspired by the "Arab Spring" uprisings, sees no chance of ousting Aliyev next week, but problems are growing that they hope he will have to address in his next term — and might one day unseat him.

As oil output peaks, discontent is growing over the gap between rich and poor, and tensions are rising with neighboring Armenia in a territorial dispute that caused a war in the 1990s.

"I do not believe change will come to this country through the election, as there is no real election in Azerbaijan," said Adnan Hajizade, a 30-year-old blogger who fell foul of the authorities, sipping ginger tea in a busy Baku cafe.

"This government is at the peak of its strength right now, but if a big social catastrophe happens, whether it is a war or the country runs out of natural resources, it will be a serious problem for them."

Hajizade and fellow blogger Emin Milli were arrested over an alleged brawl in a Baku restaurant. Supporters say they were victims of an unprovoked attack and were jailed as a warning to others after Hajizade held a fake news conference dressed as a donkey to poke fun at the authorities.

"I do like to believe that we inspired others," he said.

Protests that erupted after Aliyev secured nearly 90 percent of the votes in the 2008 election were quickly ended.

But opposition rallies have increased in the past three years, despite the threat of arrest by police, who usually quash protests quickly, and thousands demanded Aliyev's resignation at a rally in Baku last month.

Dozens of Aliyev's opponents have been arrested this year, more than doubling the number of political prisoners to 142, the Azerbaijan-based Human Rights Club said. Authorities have also raised fines for protesters who attend unsanctioned rallies.

Newspaper editor Khilal Mamedov, arrested in June 2012, was sentenced to five years in jail this month for treason, drug possession and "fomenting national strife" in a case his lawyers called "absurd."

Although the opposition has united for the first time behind a single candidate, Jamil Hasanly, he poses no threat to Aliyev.

During a televised election debate with other candidates, the majority of them pro-government, someone in the audience threw a bottle at the 61-year-old historian. It missed. 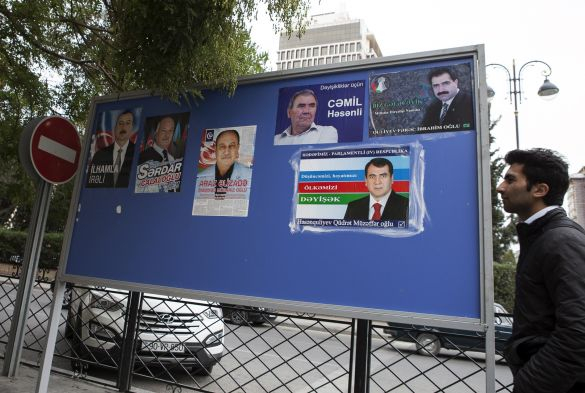 "There are a lot of young people who honestly support Aliyev," said Shahin Seyid-zade, head of the pro-government National Youth Council who organized a campaign called "My President."

"The opposition has failed to come up with a leader who can seriously challenge President Aliyev … People see no alternative to him."

When he took power, Azerbaijan was still reeling from the economic chaos of the 1990s and a war over Nagorno-Karabakh, a mountainous territory in Azerbaijan that is controlled by ethnic Armenians. That war claimed the lives of about 30,000 people.

The 190-meter Flame Towers skyscraper looming over Baku is testament to the oil boom, a century after the first oil barons struck rich on the shores of the Caspian Sea and built mansions and opera houses copied from Europe.

But economic growth has slowed since 2003 to 2007, when the economy expanded by an average of  21 percent per year.

The main reason is a slowdown in oil production, raising concerns and prompting Aliyev to accuse operator BP of making "false promises."

The economy grew by 5.2 percent year on year in January to August compared to 1.3 percent in the same period last year, accelerating thanks to double-digit growth outside the oil sector, which accounts for about 70 percent of state revenues.

Azerbaijan signed contracts last month to supply Europe with gas from its giant Shah Deniz field, due to come on line in several years, offering an alternative supply source to Russia.

"We will not run out of oil in a day, and there are also prospects for gas production as well as other projects," said Elnur Aslanov, head of the political analysis and information department in the presidential administration.

"We are not afraid of the opposition… There are challenges and we are addressing them."

The sportswear brand decided not to extend its deals in Russia, citing “operational difficulties.”
'internal affair'

The UN has urged Russia to release grain stuck in Ukrainian ports due to Moscow's military campaign.
'military operation'