PARK CITY, Utah — Bode Miller felt no need to measure his words when asked about the Russian anti-gay law that is getting plenty of attention ahead of the Winter Olympics in Sochi.

"'I think it's absolutely embarrassing that there are countries and there are people who are that intolerant and that ignorant," Miller, one of the few athletes willing to take a stand on the subject at the U.S. Olympic media summit featuring Sochi hopefuls, said Monday.

"But it's not the first time," Miller said. "We've been dealing with human-rights issues probably since there were humans."

At 35 and with five Olympic medals to his credit, Miller is trying for his fifth Winter Games. He has, over the years, built a reputation as an unconventional firebrand, unafraid to state his opinion on sports, skiing or society in general.

He said the Russian law puts athletes in an awkward position.

"I think it's unfortunate when they [sports and politics] get stuffed together," Miller said. "They always are intertwined, even though people try to keep them separate or try to act like they're separate. Asking an athlete to go somewhere and compete and be a representative of a philosophy and … then tell them they can't express their views or they can't say what they believe I think is pretty hypocritical or unfair."

The U.S. Olympic Committee's official stance, first communicated in August in a letter to athletes and others in the Olympic community, is that it disagrees with the law but that a boycott is out of the question.

"We're trying to educate the athletes that we're getting all the assurances we can from the IOC that athletes will be safe, fans will be safe, and everyone in Sochi will be able to focus on competition," U.S. Olympic Commitee, or USOC, spokesman Patrick Sandusky said.

The USOC, which brings more athletes to the games and more television and advertising dollars to the table than any Olympic federation, has shown no desire so far to use that heft to lead a protest that might pressure the Russian hosts.

USOC CEO Scott Blackmun and chairman Larry Probst had a news conference set for Tuesday, but were not expected to break any new ground on the issue. 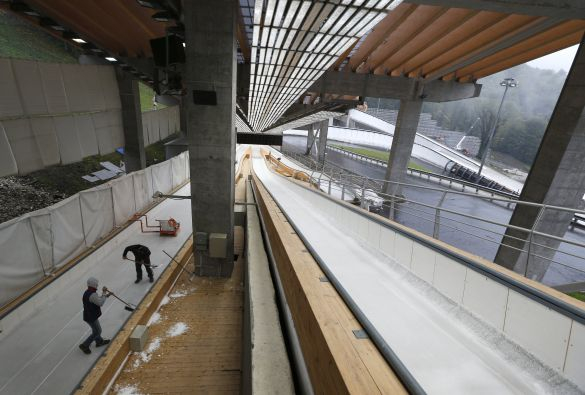 Workers grooming part of the track at the Sanki Sliding Center at Krasnaya Polyana outside Sochi last week.

"I firmly believe that your preferences don't make you any less of a human being. It's not what defines you," said Wagner, who has gay friends and family members.

"It's something I feel so strongly about."

Last week, a top Olympic official said the IOC did not have the authority to intervene in Russia's lawmaking and is convinced there will be no discrimination against athletes or spectators at the games.

Jean-Claude Killy, chairman of the IOC Coordination Commission, gave his stamp of approval to Russian preparations for the games during a news conference at the conclusion of the commission's final visit to Sochi before the Olympics, which begin Feb. 7.

Killy said the commission considered the issue carefully and in the end was fully convinced that Russia would respect the Olympic charter, which prohibits discrimination of any kind. He said the IOC had received written assurances from Russian officials that there would be no discrimination.

Typical of the responses from the 30 or so athletes at the summit was the one from defending figure skating gold medalist Evan Lysacek, who said he trusted the USOC's judgment.

"They're there as our organization and association to protect us, make sure that we — our coaches, our trainers, our teams — are all safe, and I have no doubt they'll do that," Lysacek said.

Bobsledders, including Lolo Jones and Olympic gold medalist Steve Holcomb, said athletes knew that this topic was going to come up.

"It's tricky, because, obviously, the Olympics is about uniting everyone," Jones said.

Political issues envelop almost every Olympics in one form or another, a fact not lost on Miller.

"If they let me make the rules, I'll switch it for you, and I can solve a lot of stuff real quickly," he said. "Unfortunately, no one has elected me or given me that kind of power so far. My main emotion when I hear and deal with situations like that is embarrassment. As a human being, I think it's embarrassing."