A state of emergency has been declared in Sochi as water and mudslides have blocked the Olympic resort's newly built main roads, just as International Olympic Committee inspectors arrived for their final assessment ahead of the upcoming Winter Olympic Games.

Many local residents could not travel to work Wednesday morning, with the city, clamped between the Black Sea and the Caucasus mountains, offering very few alternative routes to take.

Firefighters installed pumps to remove water, but given the uneven terrain, the water quickly flowed right back to the lowlands.

And while the local branch of the Emergency Situations Ministry said in a statement Wednesday that the situation was “stabilizing,” with water levels in local rivers returning to normal, photos of cars almost completely submerged in water made the rounds on the Internet.

The flooding coincided with the arrival of IOC inspectors Tuesday, and Prime Minister Dmitry Medvedev is set to address entrepreneurs at the Sochi International Investment Forum on Friday at the Bolshoi Ice Dome. 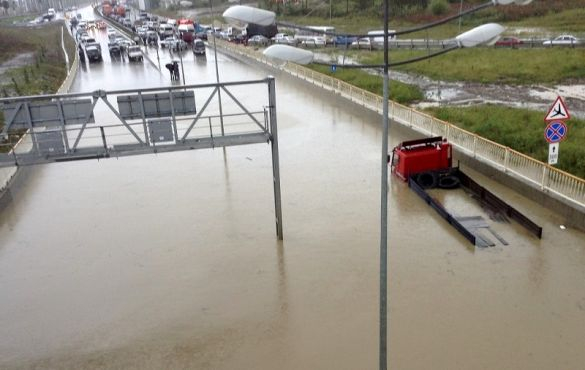 A flooded highway in Sochi on Wednesday.

The incident may serve as the perfect test for whether Sochi infrastructure can handle critical situations, but it is unclear just what grade the new facilities would get — and whether or not they would pass at all.

Alexander Valov, editor of the local news website Blogsochi.ru, confirmed the situation in the area had improved but said the roads would be blocked again if the area got the same amount of rainfall.

“The Olympic infrastructure is not ready to handle these weather conditions,” he said. “This kind of rain is typical for Sochi and happens almost every fall, but this year it was different because of all the new infrastructure, which did not have sufficient drainage for the flood.”

It took some local residents five hours to get to their homes Tuesday evening because of roads being blocked to let senior government officials through, Valov said.

Building additional roads along the coast and a highway to the area's alpine venues were among the most costly projects for Olympic infrastructure. The total cost of hosting the games has skyrocketed over the years to $50 billion, hitting the games' first record.

Alexander Zhukov, the head of the Russian Olympic Committee and one of the top officials in charge of preparations for the games, told state-run television channel Rossia 24 that he had no doubt the infrastructure would be ready and in good condition.

Former Deputy Prime Minister Boris Nemtsov agreed that everything would be done in time but was skeptical about the overall quality of the infrastructure.

“It is a total [expletive] mess down there. Yes, they will host the games, but it will all be bass ackwards,” the native of Sochi said in a phone interview.

Nemtsov said the floods might have been triggered by a drastic change in the climate recently, which was in turn provoked by environmental damage caused by all the construction.

The 48-kilometer-long Adler-Krasnaya Polyana highway, which links the seashore with the Olympic alpine resort, was built through forests and rivers of the Sochi National Park. According to Nemtsov, the road changed the air circulation in the area, which made the local climate warmer and caused mountain glaciers to melt.

“So far, this is just a hypothesis, but it is totally credible, as the overall ecosystem there is very fragile, and it is clear that there was substantial environmental damage,” he said.

Nemtsov, who unsuccessfully ran for mayor in Sochi in 2009, has argued that awarding the Winter Games to a city with a subtropical climate was a major mistake, especially because all the necessary  infrastructure had to be built from scratch. Nemtsov also conducted independent research on the environmental effects of the construction, which he presented earlier this year in a report called “Winter Olympics in the Subtropics.”

Nemtsov conceded that monitoring would have to be conducted over the course of several years to prove his theories, however.

Mikhail Krendlin, an ecologist at Greenpeace Russia studying the situation in Sochi, said he could not confirm that road construction had changed the local climate but that it was true that mudflows had been occurring for years now, and they were a direct result of the new road.

“The road goes over the Mzymta River and its valley, so it is inevitable that it will affect its ecosystem,” he said.

A Russian polar research vessel docked in South Africa's Cape Town harbor at the weekend as climate protesters raised fears it could be used to help Moscow...