As opera lovers inside New York City's Metropolitan Opera sat in silent anticipation of the new season's first sounds, what they heard was not the introduction to Pyotr Tchaikovsky's "Eugene Onegin" but shouts of protest against recently passed legislation that bans the promotion of LGBT relationships in Russia.

The activists inside the theater were peacefully escorted out. A few dozen protestors also gathered Monday evening in front of the theater, part of the Lincoln Center arts complex on the west side of Manhattan. 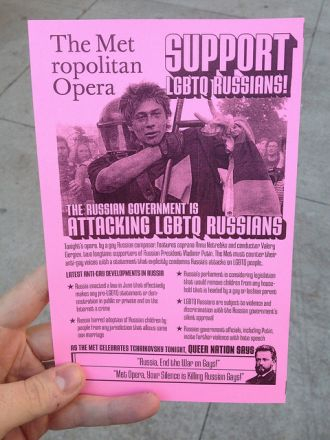 Protest flyer being handed out at Metropolitan Opera Gala on Sept. 23.

Valery Gergiyev, Russia's most famous conductor and the head of St. Petersburg's Mariinsky Theater, is conducting for the Metropolitan's performances of “Eugene Onegin,” while Mariisnky soloist Anna Netrebko plays one of the two lead roles. Netrebko, who holds dual Russian and Austrian citizenship and currently resides in Vienna, is one of international opera's leading lights.

Both Netrebko and Gergiyev have also been vocal supporters of President Vladimir Putin, who signed the anti-gay “propaganda” bill into law earlier this year and has led a drive by Russian authorities to promote conservative values.

After the incident, Netrebko issued a statement on her Facebook page saying, "As an artist, it is my great joy to collaborate with all of my wonderful colleagues — regardless of their race, ethnicity, religion, gender, or sexual orientation. I have never and will never discriminate against anyone."

She did not mention the Russian law specifically. Gergiyev has declined to comment.

"Eugene Onegin" is a staple of the Russian opera canon, and many musicologists believe that Tchaikovsky's score for the opera based on Alexander Pushkin's verse novel was strongly driven by resentment of his own homosexuality.

Peter Gelb, the director of the Metropolitan, wrote an op-ed for Bloomberg News this weekend, explaining that he deplores Russia's anti-gay law but did not want to dedicate the theater's performances to the protesters' cause. He also said he was "proud to present Russia's great gay composer."

The Metropolitan's new season will be dominated by Russian music, with Dmitry Shostakovich's "The Nose" and Alexander Borodin's "Prince Igor" operas joining "Eugene Onegin" on the season's playbill.