Russian officials have praised their diplomatic victory in "knocking the military trump card out of U.S. hands" in Geneva on Saturday by securing a landmark deal to prevent U.S. military action in Syria.

The U.S.-Russia deal was the result of nearly three days of talks in Geneva between U.S. Secretary of State John Kerry and Russian Foreign Minister Sergei Lavrov, who on Saturday agreed that Syrian President Bashar Assad would have to hand over all chemical weapons to the international community in order to avoid a U.S. military strike.

The agreement comes after a month of heightened international tensions sparked by an alleged chemical attack outside Damascus on Aug. 21, which killed more than 1,000 people. Russia has repeatedly suggested that Syrian rebels were behind the attack but the U.S. has maintained that Assad's government carried it out.

By the terms of the agreement made in Geneva, Assad has one week to reveal his undeclared reserves, and international inspectors will destroy all the country's chemical weapons by mid-2014. The procedure for Syria's chemical disarmament will be drafted by the United Nations.

The Chemical Weapons Convention will come into force for Syria on Oct. 14, a month after Damascus' submission of the corresponding documents.

The U.S. has been adamant that any violation of the treaty would be met with force, however.

At a meeting with Israeli Prime Minister Benjamin Netanyahu on Sunday, U.S. Secretary of State John Kerry said "the threat of force is real" if Syria disregards the agreement.

U.S. President Barack Obama called Syria's decision to join the Chemical Weapons Convention a "positive development" but made clear that the U.S. was "not just going to take Russia and Assad's word for it," the White House's website reported.

"We need to see concrete actions to demonstrate that Assad is serious about giving up his chemical weapons," Obama said. "And if diplomacy fails, the United States remains prepared to act," he said.

After the oral agreement in Geneva  — which remains to be signed on paper —  Lavrov was upbeat that the "successful realization" of the agreement would help "avoid a military scenario that would be catastrophic for this region and international relations as a whole," according to a transcript from a joint news conference in Geneva posted on the Foreign Ministry's website.

"This shows that when there is a will ... Russia and the United States can get results on promoting the settlement of key modern problems," Lavrov said. 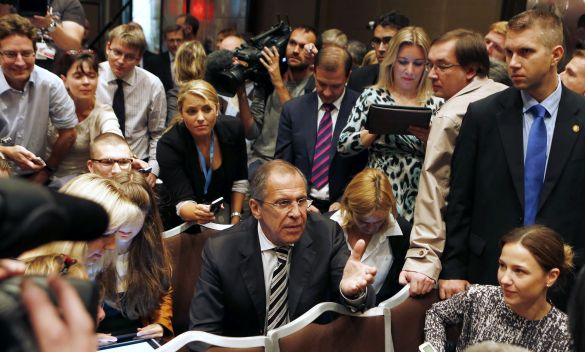 Lavrov holding court with journalists after talks with U.S. Secretary of State John Kerry in Geneva on Saturday.

Kerry displayed cautious optimism about the agreement, calling its implementation a "hard road ahead" that would "require the vigilance and the investment of the international community and full accountability of the Assad regime," he said, the U.S. State Department reported on its website.

The international community expressed approval of the agreement, with the European Union, the United Nations and the League of Arab Nations, as well as Turkey, France, Germany, Britain, China, Israel and Belgium, welcoming the move.

U.S. agreement to the pact would not allow it to act without the UN Security Council's approval because the terms stipulate that Syria's arsenal will be under international control through the Organization for the Prohibition of Chemical Weapons in Hague, Pushkov said.

"The military trump card has been knocked straight out of U.S. hands, although they are still trying to hide it up their sleeve," Pushkov told Interfax.

Lavrov made similar comments Saturday, saying the UN report on the use of chemical weapons on Aug. 21 could be "touched up."

"There are reasons to suspect that they will try to touch up the report to be presented Monday so that it will be more one-sided compared with what the inspectors wrote," Lavrov told Interfax.

Vyacheslav Nikonov, a senior State Duma deputy and an expert in Russia-U.S. relations, called the  Geneva agreement a "diplomatic success" for Russia because it managed to avert a U.S. attack on Syria for the time of the latter's chemical disarmament.

"With this outcome, Moscow clearly boosts its image of a global political player that is keen on solving complex international policy issues through diplomacy, especially amid Washington's frequent reliance on force," Nikonov told Interfax.

A day before the Geneva agreement, President Vladimir Putin praised Syria's intention to join the Chemical Weapons Convention while speaking before the leaders of member states of the Shanghai Cooperation Organization in Bishkek.

"I think that we must welcome this decision by Syrian leaders. I want to express the hope that this will be a serious step toward resolving the Syrian crisis," Putin said, RIA Novosti reported.

The member states stood behind Russia's initiative to have Syria place its chemical weapons under international control to avoid foreign military intervention, and they also agreed to work toward convening a conference on bringing peace to the Middle Eastern country.

The Geneva agreement "foiled the plans" of Syrian rebels and "their supporters abroad" to overthrow Assad, Pushkov said, in an apparent reference to the U.S., calling the development "another positive result," Interfax reported.

The Geneva pact "deprives Syrian rebels of the opportunity to use chemical weapons for provocations: now it will be clear that no one could have been behind [chemical attacks] but them," Pushkov wrote on Twitter on Sunday.

In another post, however, he warned that the U.S. was still intent on "changing the regime in Syria."