ZHUKOVSKY, Moscow Region — The skies were clear and cell phone coverage spotty on the first day of MAKS 2013, the international aerospace exhibition that opened in Zhukovsky near Moscow on Tuesday, but a handful of agreements were signed and a key piece of hardware made a surprise appearance.

The press center was closed, and access of journalists was denied to the International Aviation Congress that was held in the morning because a delegation of high-ranking officials was expected to arrive — Prime Minister Dmitri Medvedev being one of them.

After the congress was over, the Prime Minister was shown the ground exhibition with one of the main points of interest being the model of a MC-21 airplane that its manufacturer, United Aviation Corporation, has high hopes for. It is expected to successfully compete with its rival, the Boeing 737. There are currently 256 orders for the MC-21, Interfax reported.

The lion's share of deals during the first day at MAKS were signed by companies controlled by or connected with the state corporation Rostec. 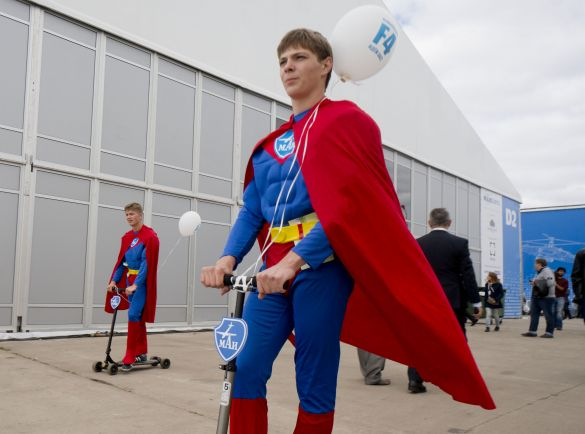 Super students of the Moscow Aviation Institute promoting their stand to passersby at the show on Tuesday.

VSMPO-Avisma signed a prolongation of a contract until 2020 with Airbus to supply titanium materials used in production of the A320neo and A350-1000 airplanes.

Considering that Airbus now has orders for a total of 2,500 A320neo airplanes, VSMPO will have continuous demand for its products, said Olivier Cauquil, Airbus senior vice-president.

The first agreement between the Russian titanium producer and Airbus was signed in the '90s and today VSMPO is its key supplier, providing more than 60 percent of the company's need for the light but strong metal.

"The aviation sector is recovering from the crisis and has been growing by 10 percent per year," said Mikhail Voevodin, CEO of VSMPO-Avisma. But related industry has seen slow growth, and for this reason a long-term contract with Airbus would mean that the pace at production facilities of VSMPO, which are now about 20 percent idle, will pick up.

Among the contracts signed Tuesday was an agreement between Russian Helicopters and Columbian Vertical de Aviacion for the purchase of 10 helicopters, 5 Ka-62 and 5 Mi-171A1 for a total price ranging from $90 million to $100 million.

Also there were agreements on cooperation in the field of aviation technology development signed between EADS and Rostec and between Rostec subsidiary Aviation Equipment and Boeing.

This year the total amount of contracts at MAKS is expected to exceed $10 billion, as it did two years ago, but there will be no military contracts, a source at United Aircraft Corporation told Vedomosti prior to the event.

But there was a number of new models or modifications of previous ones both on the ground and in the air.

Among others, Sukhoi showcased its modernized Su-30MK; Ilyushin its Il-76MD-90A; and Yakovlev its long-awaited combat training plane Yak-130. Russian Helicopters displayed the Ka-52 Alligator battle helicopter and its new machines: the AW139, which is made in cooperation with Italian company Agusta Westland, the Ka-62, the Mi-38 and the Mi-28N Night Hunter.

As for the aerial display, the most anticipated was the demonstration of the Sukhoi T-50 fifth generation fighter plane, which media reports said earlier might not perform in the air due to technical problems.

But three T-50 planes ripped through the sky above the exhibit toward the end of the day. One of them remained after a first pass in front of the spectators and did some maneuvers that looked far more aggressive than what was shown two years earlier when the fifth generation fighter plane was first presented to the public.

The show continues through Sunday, with highlights to include helicopter day on Wednesday and extensive aerial demonstrations for the public starting on Friday.