KIEV — Emin Akhmedbekov feared persecution for his numerous lawsuits against Azerbaijan. So the former police officer took his wife, three children and elderly mother and fled to Ukraine, hoping to find refuge in one of the freer ex-Soviet republics. Instead, the family found itself holed up in a small village with little hope of getting asylum and terrified of being sent back.

"We are afraid to leave the house," Akhmedbekov said. "Ukraine is dangerous for us."

The United Nations refugee agency says Ukraine is a harsh asylum destination, plagued by neglect, discrimination and illegal expulsions. Global watchdog Amnesty International goes further, accusing it and several other former Soviet states of running an illegal rendition program that puts refugees at risk of torture back home — all in the name of security cooperation that's valued more than rights.

Many asylum seekers running away from Central Asian dictatorships or a crackdown on opposition activists in Vladimir Putin's Russia seek refuge in Ukraine, a country they can enter without a visa and where they can easily communicate in Russian. Ukraine remains one of the more democratic ex-Soviet states, even with the rollback of the reforms that followed the 2004 Orange Revolution. Ukraine also shares borders with several European Union member states, and some asylum seekers hope to make a move further west.

But most refugees soon find a chilling reality. Last year, Ukraine, a middle-income country of 46 million people, granted refugee status only to 13 percent of about 1,800 applicants, according to the U.N. High Commissioner for Refugees. That was in contrast to 32 percent in Hungary, which receives a comparable amount of asylum seekers, but is nearly five times less populous.

Oldrich Andrysek, the UNHCR representative in Ukraine, said the decisions were not made in a transparent manner, with many applicants who clearly need asylum denied, and others getting it for no clear reason. "On balance, the system does not work," Andrysek said.

Over the past three years, Ukraine has unlawfully sent more than 20 asylum seekers home, according to a recent report by UNHCR, despite efforts to block the expulsions by the agency, local and international rights groups and the European Court of Human Rights. Some of those, UN officials say, were sent back right at the border without even having a chance to apply for asylum.

And some asylum seekers in Ukraine have simply gone missing.

In October last year, a Russian opposition activist disappeared from Kiev in broad daylight and turned up several days later in a Moscow prison, where, he said, he was abducted and tortured. A spokesman for the Ukrainian Interior Ministry acknowledged that Leonid Razvozzhayev was taken by Russian security agents, but contended the case was not a criminal matter and thus would not be investigated. In December 2009, an Uzbek asylum seeker fleeing likely arrest and torture disappeared from Kiev and soon contacted his family from a prison in Uzbekistan's capital, Tashkent, according to Amnesty. 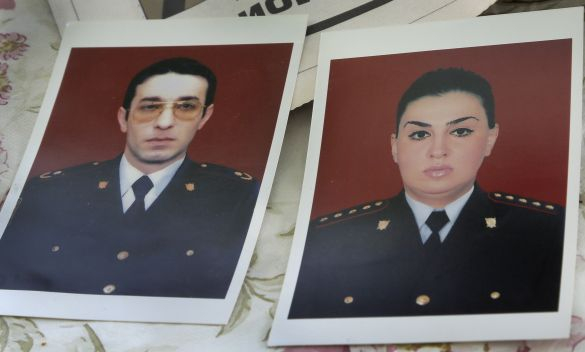 In a July report called "Return to Torture," Amnesty claimed the disappearances were linked to an alleged rendition program practiced by Ukraine, Russia and Central Asian republics that the group calls a "cynical subversion of justice."

Serhiy Hunko, a spokesman for Ukraine's State Migration Service, denied that: "Naturally, there is no illegal program," Hunko said. The Service said in an earlier press release that it needed more money and appropriate legislation to improve its asylum system.

Even if refugees are not sent back, their lives in Ukraine are still an ordeal. Some spend months in detention while their applications are being considered, even if they present no apparent threat to society and have families waiting for them outside.

The government provides little translation and legal aid, so refugees who do not speak Ukrainian or Russian have extra difficulty filing for refugee status and receiving an official document to legalize their presence in Ukraine. Even if they manage to receive the asylum seeker's card, they have to renew it every month. Because the card is only valid for a short period of time, they have virtually no chances of finding a legal job. And many Ukrainian government bodies do not even recognize that card as a valid document, preventing refugees from receiving international money transfers or, in some cases, even boarding a train.

Palestinian asylum seeker Hesham Abu Hmeid, 43, earned an engineering degree from a respected Ukrainian university, but as an asylum seeker he cannot find a job in his field. He had a job working in second-hand clothing shops, but his first boss fired him because he regularly missed work in order to prolong his asylum seeker's card or attend court hearings as part of his refugee bid. His second boss fired Abu Hmeid after he moved the shop to a more upscale location, and said he needed a worker with proper documents.

"We are simply asking to protect us by giving us a document so that I can find a job. That's all I am asking for," Abu Hmeid, a soft-spoken man, said outside a hospital in Kiev, where he was to undergo treatment for a hernia, paid for by UNHCR. "All I am asking for from the Ukrainian state is to give me protection, a status, a document."

Maksym Butkevych, an activist with the Ukrainian group No Borders, said survival is all refugees can hope for in Ukraine, not rebuilding lives.

"Some people break psychologically, some survive and adapt," Butkevych said, "but we are talking just about surviving."

Akhmedbekov, the former Azerbaijani police officer, alleges that back home authorities threatened to harm his children if he refused to withdraw claims against his country in the European Court of Human Rights, prompting him to flee to Ukraine. Akhmedbekov had filed a complaint against a 3-year prison sentence he had served on charges of resisting the orders of a police officer and attacking him. Akhmedbekov claims the case was fabricated in order to punish him for earlier complaints to the European Court about alleged unlawful dismissal.

Akhmedbekov, 46, says he feels threatened in Ukraine after receiving menacing phone calls from Baku demanding that he withdraw his lawsuits, and he has asked UNHCR to resettle him to a safer country. Ukrainian police have refused to grant him protection after the alleged threats, he says. Migration authorities are still considering his application for refugee status.

In Baku, Ehsan Zahid, spokesman for Azerbaijan's Interior Ministry, dismissed the Akhmedbekovs' allegations as "absurd" and "complete lies." He accused the family of simply trying to raise their public profile in order to secure a nicer life in the West.

"It was obvious that their goal was to emigrate to some European country and win better living conditions," Zahid said.

Meanwhile, Akhmedbekov's 15-year-old daughter, Dilyara, has developed severe depression, unable to sleep at night, afraid to attend school and hiding in her room most of the time.

"You are left on your own here," said mother Nigyar, "nobody gives a damn about you."