It seems they may have been inspired by a similar protest that took place in Amsterdam over the weekend, photos of which show men and women clad in Russian riot police uniforms at a gay-pride parade. 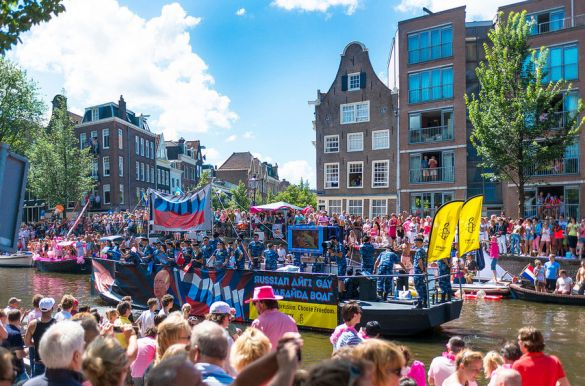 Demonstrators at Amsterdam's gay-pride rally dressed as Russian riot police as they float along in a boat.

The activists, representatives of the Dutch chapter of Amnesty International, held signs reading things like, "Too Gay" while they sailed along the river in a boat. Some of the uniforms were also supplemented with necklaces.

The pictures were met with mostly supportive comments, with people praising the effort to protest the anti-gay legislation, which stipulates fines for promoting homosexuality among minors.

One blogger, Andrei Malgin, noted that in addition to the anti-gay legislation getting publicity because of the protests, OMON, Russia's riot police, is also becoming an internationally recognized acronym.