It's time to put the tired theater season to bed. Let it hibernate for a month or so then make a perennial attempt to come back fresher and better in September.

The 2012-2013 season was lopsided. There was a lot of mediocre, admirably ambitious, but, frankly, forgettable, work. Decent enough to spend an evening out with, but surely not worthy of remembering in a list of bests.

But there were some stunning, transformative developments. The times here are not merely a-changin'; things have changed too. For the 21st time in as many years, here are the always quirky Moscow Times theater awards to prove it.

This season has seen some stark developments in Russian theater, with the recently opened Gogol Center leading the way.

Trend of the Year: Adaptations. Whether you apply this term strictly or loosely, it gave rise to many of this season's most prominent performances. The Gogol Center produced three brilliant adaptations of old European film scripts. The Mayakovsky Theater resaddled an old Ibsen warhorse into a new Russian political vehicle, several works by Oscar Wilde were mashed into one at the Moscow Art Theater, and the Vakhtangov Theater spectacularly deconstructed one of the greatest works in Russian literature. Read on for more.

Cleverest Genre Shift: The Fomenko Studio with "Sailors and Whores," choreographed by Oleg Glushkov. This venue has been a top dramatic house for two decades. This dance show spun that around and demonstrated that this company of dramatic actors can dance beautifully too.

Exceptionally Absurd: Denis Azarov's production of Alexander Vvedensky's "Christmas at the Ivanov's," at the Gogol Center. Weird, wacky, wonderful and ominous. This was childlike craziness with an apocalyptic feel.

Best Revival: Vladimir Ageyev's production of Viktor Slavkin's "Cerceau," at the Drugoi Theater. A legendary staging of this play by Anatoly Vasilyev nearly three decades ago meant no director had the nerve to approach this play since. Ageyev not only pulled an excellent, influential production out of mothballs, he found a fresh, modern approach to it.

Best New Original Play: Yury Klavdiyev's "The Slow Sword," at the Playwright and Director Center. An unblinking drama about a young office worker dropping out and encountering a contemporary society falling apart at the seams.

Best Actress: Alexandra Ursulyak in "The Good Person of Setzuan," at the Pushkin Theater. Playing Brecht's complementary sister-cousin pair of Shen Te and Shui Ta, Ursulyak does what only the finest actors do — she underplays this big, fat, juicy role, tackling it with nuance and half-shades.

Best Actor: Grigory Siyatvinda in "London Show," at the Satirikon Theater. Siyatvinda essentially has just two extended scenes as Eliza's drunken father in this adaptation of Bernard Shaw's "Pygmalion." But you could start a whole new acting school based on the prowess he demonstrates — timing, gesture, intonation, body control, voice control. Probably two of the funniest scenes I have seen in 21 years on this job.

Masterful Metamorphosis 1: Dmitry Krymov's slyly titled "As You Like It," — actually a staging of the Pyramus and Thisbe play-within-a-play from "A Midsummer Night's Dream," at the School of Dramatic Art. Note that I have no "Best Production" category this year. There were too many candidates. So consider this exhilarating, inventive, playful and beautiful reinvention of Shakespeare the first in a series of transformative bests.

Masterful Metamorphosis 2: Rimas Tuminas' dramatization of "Eugene Onegin," at the Vakhtangov Theater. A stunning, breathtaking, wise and humorous rethinking of Alexander Pushkin's great verse novel that gave us glimpses behind the scenes and between the lines.

Project of the Year: The adaptation of European film scripts at the Gogol Center. Von Trier's "The Idiots," Visconti's "Rocco and His Brothers" and Fassbinder's "Ali: Fear Eats the Soul" were reimagined in a contemporary Russian context by, respectively, Vladimir Pecheikin, Mikhail Durnenkov and Lyuba Strizhak. The result was a handful of the city's most powerful performances.

From Page to Stage: Memorial Society's performing arts program. This library, museum and activist center continues to offer evenings exploring the intersection of history, documents, politics and the performing arts. Events this year included a series of plays written by Czechs and Russians about the events of the Prague Spring in 1968, a screening of a documentary about the influential "Citizen Poet" satire series, and a dramatized performance of the famous philosophical letters by 19th-century "dissident," Pyotr Chaadayev.

Deja Vu: "An Enemy of the People," at the Mayakovsky Theater. Directed by Nikita Kobelev and adapted radically by Sasha Denisova, this reconsideration of Ibsen's 130 year-old play made room for references to opposition leader Alexei Navalny, the controversy over the future of the Khimki forest and other hot button contemporary political issues. The title, which coincidentally references an odious aspect of the 1937 purges, added to the in-yer-face quality of this show. 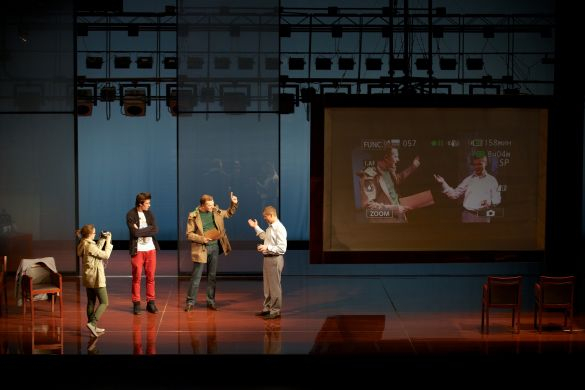 Politically charged "Enemy of the People" reminding the audience that oppression has many forms and settings.

Habitual Iconoclast: Nikolai Roshchin and his ARTO Theater. Roshchin somehow finds a way to exist outside the regular flow of Moscow theater while inhabiting a theatrical world of his own. This season's production of Slawomir Mrozek's "Tango," directed by Andrei Kalinin and designed by Roshchin and Kalinin, was another wonderfully weird concoction that took spectators to an edgy place and encourages them to look into the abyss.

Killer Kitsch: Konstantin Bogomolov's pastiche, "The Ideal Husband," based on works by Oscar Wilde and others, at the Moscow Art Theater. This parody of contemporary Russian society and politics took potshots at pop stars, athletes and politicians. It was over the top, long and tried the patience. But its satire was wicked and it was a huge success.

Boys Will Be Girls: "Nine Months/40 Weeks," written and directed by Alexei Kulichkov and Sergei Shevchenko, at Teatr.doc. This docudramedy about the fears, horrors and joys eight women encounter bringing a child into the world was acted with taste, humor and affection by an all-male cast.

Development of the Year: Politics moving to the main stage. Politics had enlivened a few small theaters in Moscow, but wasn't making the leap into the big, traditional venues. Not true now. "An Enemy of the People," "An Ideal Husband," and the entire European film project at Gogol Center all threw real-time politics at mainstream audiences.

Theater of the Year: Kirill Serebrennikov's Gogol Center. Little more needs be said. Just look back over the shows dotting this article. The redesigned, rethought theater opened in February. By the time it closed shop in June it had tossed out a half-dozen major productions which pushed Moscow theater into uncharted territory. Unprecedented and unqualifiedly impressive.

Man of the Year: Sergei Kapkov, the head of Moscow's Culture Committee. He came on the job last year and shook things up by handing the Yermolova Theater to Oleg Menshikov. He began this season revitalizing what is now called the Gogol Center by handing it to Kirill Serebrennikov, and ended it by remaking the Stanislavsky Drama Theater and the Playwright and Director Center as he turned them over to Boris Yukhananov and Klim, respectively. These have been controversial moves, but their potential for success is huge. Like it or not, Moscow theater is turning onto a new track and Kapkov has contributed to that greatly.