Eighteen people were killed and more than 60 injured Saturday in a bus crash outside of Moscow that police say was caused by a truck driver who had racked up seven traffic violations last year.

The crash, a grim reminder of the dangers of driving in Moscow that is likely to revive calls for tighter traffic legislation, occurred around 1 p.m. Saturday, when a Kamaz truck carrying rubble rammed into a bus near the village of Oznobishino in Moscow, Interfax reported.

At least 61 people were injured and more than 30 passengers were initially hospitalized, 15 of whom were in critical condition.

According to the latest information available Sunday evening, 29 passengers remained in hospitals in Moscow and the region as of late Saturday, the Moscow branch of the Emergency Situations Ministry said on its website.

A 34-second video of the crash published by LifeNews and recorded by a passing driver shows the truck driver turning from a perpendicular road onto the main road and driving into the path of an oncoming bus.

The truck driver evidently tried to swerve, but the truck's side slammed into the side of the bus at full speed, almost literally tearing the bus in two. The video shows the truck driver standing on the road seconds after the crash and dusting himself off.

Police suspect the truck driver, an unidentified 46-year-old Armenian national who was driving with an Armenian license, violated traffic rules by failing to yield to the bus, a city police source told Interfax.

The truck driver, who spent one day in a medically induced coma, has been detained by police for 48 hours but refused to testify Sunday, without giving an explanation. Police attributed his refusal to his feeling sick, Interfax reported.

The Interior Ministry said it would seek the driver's arrest.

On Sunday, acting regional governor Vorobyov called for a tightening of the punishment for traffic violations, a sentiment voiced by Moscow police chief Anatoly Yakunin in the wake of an earlier crash.

"This case once again makes us talk about the tightening of rules that concern public traffic, the transportation of passengers," Vorobyov told a government meeting, the official regional website reported. 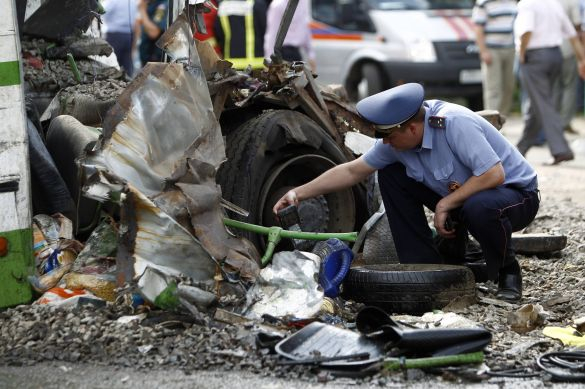 A police officer inspecting items left over from the collision. Monday has been declared a day of mourning. (Sergei Karpukhin / Reuters)

The acting governor also announced an extraordinary inspection of the region's almost 6,000 public buses, as well as "difficult crossroads," where traffic lights will be installed.

The truck driver's past violations included crossing into the oncoming lane and driving a car in an improper technical condition.

But Viktor Pokhmelkin, head of the Movement of Russian Motorists, said that seven violations of traffic rules don't necessarily mean that the driver would be stripped of his license, and Armenian driving licenses are valid in Russia.

Even a gross violation like crossing into the oncoming lane would lead to disqualification from driving only if witnessed and protocoled by a traffic policeman, Pokhmelkin said by telephone.

If the violation is recorded by a video camera and the driver is notified by mail, however, he will only be fined a few thousand rubles, the lawyer said.

And despite past violations, Pokhmelkin said, the truck driver was not necessarily to blame for the crash, as the intersection where Saturday's crash occurred is known for frequent collisions.

"It is possible that there is something wrong with the organization of the traffic movement there," he said.

Popular blogger Rustem Adagamov wrote on his Facebook page Sunday that the road from which the truck driver turned onto the main road was winding and had no traffic signs on it, making it impossible for the truck driver to see the bus in time. Adagamov published photos of the road to prove his point.

A bus passenger who survived the crash, however, told Komsomolskaya Pravda that she had seen the truck coming from far away.

While Saturday's crash has already resulted in calls for tighter legislation, Viktor Travin, president of the Moscow-based Board for Legal Defense, a firm that defends drivers, said that more should be done to prevent violations from occurring in the first place and that "the state must care about preventing violations, not about punishment."

"Instead, the fight against the violators has turned into a fight to replenish the [state] budget,"  he said.

On Tuesday, City Hall and the Moscow region government will decide whether to pay compensation of 1 million rubles ($31,000) to the relatives of each of those who died in Saturday's crash, and 500,000 rubles to each of the injured, Vorobyov said Sunday.

The victims also have the right to apply to the SOGAZ company, where the bus was insured, for compensation, SOGAZ spokesman Nikolai Galushin told Interfax.

A law passed in January gives passengers the right to claim up to 2 million rubles ($62,000) in compensation from carriers.

In October, a collision of two cars at a Moscow intersection in which two people were killed, including popular actress Marina Golub, prompted Moscow's police chief to order traffic police to take measures to prevent such an accident from happening again, including a tightening of legislation.

The driver deemed responsible for October's crash had also repeatedly been fined for traffic violations.

Correction: Due to an editing error, the article titled “18 Killed, Dozens Injured in Bus Crash” in Monday's paper incorrectly identified the village of Oznobishini as part of New Moscow, located 22 kilometers southwest of the capital. The village, part of territory that was annexed to the city last year, is officially within Moscow city limits.