Young people in leadership positions, architectural gems in the middle of industrial areas and sheer optimism in the midst of life problems are the things that make Russia different from other countries, according to Italian Ambassador Antonio Zanardi Landi.

Landi believes that Russian people are fundamentally more optimistic than Europeans. Despite all the problems the country is facing, people stay motivated and remain hopeful about the future.

"These young people in Moscow," the ambassador continued, "combined with the amount of culture you have on offer here, make Moscow a much livelier city than we ever imagined."

"I won't forget the amazement I felt when I saw young people, whom you would normally expect to see dancing elsewhere, queueing to see an art exhibition at the Pushkin museum during the year of Italian culture. It made me realize that Russia presents us with an opportunity to use culture to connect to people. We did. And it opened doors in both business and government affairs," the ambassador said.

The ambassador's official term in Russia ends on September 1. "I still feel like I just arrived," he said, "two and a half years are nothing in such a big country, such a complex country as Russia. I am leaving with a very different idea of what Moscow and Russia really are. It is very different to what I thought."

Q: What are the most memorable moments from your time in Russia?

A: I had a privilege to travel to places most Russians wouldn't go — for example, Yamal-Nenets autonomous district — and to see something completely different from what we are used to. We also traveled to other parts of Russia to see Italian operations.

But the most memorable moment was at the start of the year of Italian culture, to see the reaction of your people to art. It was very unexpected.

Normally, people hold down their emotions while distractedly attending art exhibitions. Here, we saw real enthusiasm not only among older culturally seasoned generations but also from young people. We saw them queueing in front of a museum because they wanted to see Italian art.

This was an eye opener for me. It made me realize that we could use art as a vehicle to connect to the Russian business world and community in general.

Normally, we focus on serious things like economics and financial matters and only think of art if there is time left. If there happens to be a youngster who likes it, then you would ask him to do a bit of culture.

My experience in Moscow made me rearrange our priorities. I realized that we had to make culture the main branch of our activities in Russia. We had to engage in cultural activities that would in turn improve general image of our country.

Focusing on culture also produced a very positive political effect on the relationship between our countries. We saw people becoming more attentive, better disposed and more available after they saw us taking part in cultural activities.

Another memorable moment was when I discovered Krutitsy Metochion — it changed my perception of Moscow once again. It is a set of buildings from the 17th century — a little délabré as French would say, but full of character and full of memories. It is an architectural gem, right in the middle of modern urban area. I take all my guests to see this place. It makes you realize that there is much more to Moscow than just the Red Square and the Kremlin." 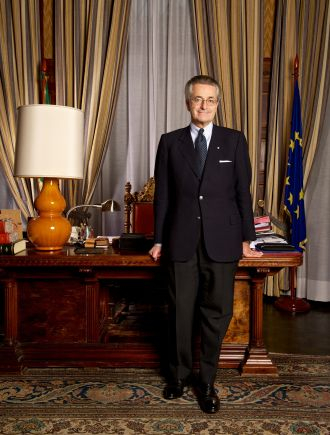 Landi's experiences have been teaching him to prioritize culture and art. (For MT)

Q. Prior to Russia, you served as an ambassador to other countries, including Iran and Serbia. What experience from these countries was useful in Russia?

A: I was posted to Iran during the Iran-Iraq war. It was a permanent emergency situation. Nevertheless, I became very attached to Iran. I found that personal and business relationships that I developed there are still strong even now, and I use those contacts even in Russia.

In Serbia, there was a strong business community, similar to Russia, but different in a way that it consisted mainly of small businesses and medium industrialists. Belgrade was a sort of a training ground, preparing me for Moscow.

I found that the personal aspect of business relationships was very important for Serbians, which is also very true for Italians and Russians.

Personal relationships are a very relevant factor in doing business in Russia. It helps if you establish a contact with the other party. I had some good surprises here — sometimes after a half-an-hour chat, it was clear to me whether I would work with the person or not. It happened both in government and business sectors.

Q. You mentioned that you were surprised by the number of young people in high positions here in Russia. Did this generational difference create any difficulties when dealing with them?

A: Not really. I don't know what it's like in the business sector, but as far as contacts with your young ministers, for example  Minister of Communications and Mass Media of Russia Nikolai Nikiforov, Deputy Minister of Justice Elena Borisenko or Deputy Minister of Justice Yury Lyubimov, we are very happy with the relationship that we established. Dealing with them is very much a matter of fact, very quick, very direct. It is a very pleasant approach.

This is a type of very bright generation that is becoming typical of Moscow. It is very easy to work with them. In my job, it really helps to deal with somebody who is quick to make decisions and doesn't create unnecessary barriers.

Q. What challenges for Russian-Italian relationship do you see ahead?

A: There is one fundamental challenge we need to work on: It is the gap in Russia's relationship with the European Union.

It's all good as far as the Italian-Russian relationship goes. But Italy finds itself in a tricky situation. Being one of the founding members of the European Union, its allegiance lies with Europe. The Italian system is very much aligned with Europe and the majority of Italian leaders are very much Europeans. The challenge is to work as much as possible on the European front in order to diminish the gap.

We think that without Russia, there is very little future for Europe in the long term, and vice versa.

Italy has to be creative in how it prepares for the EU presidency in the second half of 2014. We need to find a way to discuss issues between Europe and Russia in a nonconfrontational way. Russia needs to find a way to relaunch strategic partnerships not only with Italy, Germany or France but with Europe as a whole.

Another issue is visas. Italy has always been in favor of easing the visa regime as we would like to have more Russian citizens feeling welcomed in Italy. It would be good for economical and political reasons.

As a step forward, Italy will be issuing multiple entry two- and three-year visas as a rule, using the Schengen framework in the broadest way we can to avoid having the same people apply for visas again and again.

Q. What advice would you give to foreign businesses here?

A: We found that there are two things that are instrumental for foreign business success in Russia.

First, they need to delegate as many tasks to local nationals as possible. For example, out of about 1,000 workers in the Ferrero Rocher's plant in Vladimir, 900 are Russians. It is the same with the Indesit white goods factory in Lipetsk. Out of 5,000 people working there, only about 5 are Italians. It works really well because from our experience, Russian leaders do a much better job managing Russian workers. Local people tend to know better how to be with people and manage a successful operation. It is a very good, intelligent recipe.

Second, they need to be wise when choosing a Russian region to invest in. They either need to find a good partner who would deal on their behalf with the government officials, or find a governor who understands the importance of foreign investment in his region. For example, Lipetsk's government realizes how important it is for the region to have those 5,000 job that our factory created.

Q. Who or what inspires you?

A: I have to say that during my time in Russia, I was very much inspired by seeing signs of Italian work in architecture. For example, I saw copies of Italian art in Vladimir orthodox churches. I didn't realize that the Italian influence in Russia can be traced as far back as the  century.

Take a Ski Trip — To Siberia

When you think of Siberia, skiing and snowboarding might not be the first things that come to mind.
weekend kitchen

Our favorite chef takes us step-by-step through the creation of this honey-creamy-tart-sweet confection.
snowy pics

St. Petersburg has been buried under mountains of snow following a days-long blizzard.
artistic sand box

For Yekaterinburg artist Yelena Kadyrova, drawing a line in the sand is her life's work.