St. Petersburg is drawing scores of business leaders to a forum where they are hoping to get the latest tips on the course that the government and major companies might take.

Opening Thursday at the exhibition center LenExpo, the three-day event will host President Vladimir Putin for a keynote speech, while company executives including billionaire Oleg Deripaska and the chief of state development bank VEB, Vladimir Dmitriyev, will share their views about investment and the economy.

"My biggest question is the extent to which very large-scale Russian enterprises see the need for significant change in order to become more competitive on the global stage," said David Owen, who is consultancy Deloitte's chief for the Commonwealth of Independent States, which incorporates Russia and most former Soviet republics.

Putin will meet with the chiefs of the Russian Direct Investment Fund and major global investment funds on Thursday.

He will give the keynote speech on Friday. During that day, he is scheduled to hold talks with Merkel and Rutte. The Russian and German leaders will then speak with business people from both countries.

In another meeting on Friday, Putin will talk with the top executives of global energy companies.

Economic Development Minister Andrei Belousov said this year's forum stood out because it comes just two months before St. Petersburg hosts another prominent international event: a summit of the Group of 20. The government tailored the agenda for the June forum in hope that it prompts discussion on many of the topics that will also come up before the heads of state of the world's 20 major economies, he said. The issues include encouraging investment, managing sovereign debt, reforming the global financial system and ensuring sustainable development of energy markets.

Belousov said the St. Petersburg forum will give him an opportunity to make sure he's "on the same page" with the global economic community about current trends. 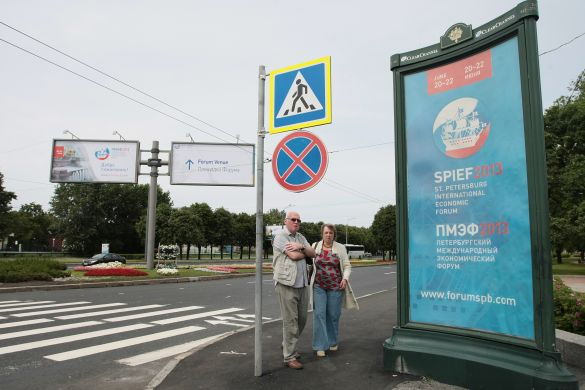 Oleg Goshchansky, managing partner at consultancy KPMG in the CIS, said he was looking forward to a debate on regional investment climate and knowledge-based economy.

"The forum attracts very interesting sparring partners, and I enjoy being part of this debate," he said.

He said the perennial issue of weaning the Russian economy off the dependence on oil and gas revenues was likely to reappear at the forum. One of the centerpieces will be the discussion on improving conditions for small- and medium-sized businesses, he said.

Foreigners who are already investing in Russia do notice improvements in the business environment, he said. The ones that have not yet committed any money to the country view the picture differently, he said.

"I don't believe that for them, on average, Russia's image has changed significantly over one year," he said.

A survey of international business people that KPMG conducted last year showed that the key reason for holding back on investing in Russia is lack of understanding of the country.

The forum is taking place against the backdrop of a slowdown in Russia's economic growth, while the situation on the global market is uncertain.

"I'll be fascinated to hear if delegates believe that recent green shoots will take hold and what role the large emerging markets must play in the global economic recovery," said Todd Berman, head of investment banking at  Sberbank CIB.

"The recent deceleration in Russia's growth rate will be on everyone's mind in St. Petersburg. Is it simply a pause for breath that could well be resolved as inflation abates in the second half, or is it something more structural?"

It may be that a slower pace of growth is inevitable in Russia because the country has now become a considerably larger and more diversified economy, he said. The growth is still impressive by global standards, he added.

Some of the forum's key speakers will focus on the role of the new middle classes in driving growth, Berman said.

About 3,700 people from around the world registered for the event this year, as of June 11, down from 5,300 participants last time. Even so, the city's four- and five-star hotels are booked up for the period of the forum, RIA Novosti reported. A booking clerk at the Astoria said the request to reserve the last room came in early May.

As usual, room prices almost doubled and reached 39,000 rubles ($1,300) per person in a double at some of the more glitzy hotels.

Companies and government agencies plan to sign contracts on the sidelines of the forum. The value of the expected deals hasn't been reported, but last year it amounted to 350 billion rubles ($11.3 billion).

One of the agreements slated for signing is between state high-tech corporation Rusnano and Alcoa, according to the forum's website. Another one is between the port of Ust-Luga and developer ICT Group.

In addition, the Russian Direct Investment Fund and General Electric are to sign a memorandum of understanding on Friday to create a joint venture to build mini power plants for manufacturing companies across the country. The power plants, using GE equipment, will be independent from the federal power grid.