The Central Bank's departing chairman sought on Wednesday to anchor his inflation-fighting legacy, warning of the risks to price stability that the government's push for a weaker ruble could entail.

Finance Minister Anton Siluanov, strapped for funds to pay for the spending promises Putin made on his return to the Kremlin for a third presidential term in May of last year, this week said a weaker ruble would boost both revenues and growth. 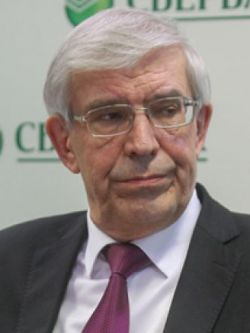 A Kremlin spokesman said on Wednesday that the economy would benefit from a weaker currency by increasing the profits of export-oriented companies but that talk of a "strong devaluation" was not appropriate.

The currency has sold off, even as the price of oil — Russia's chief export — has risen, prompting Ignatyev to weigh in on the debate before he retires after 11 years in the job.

"The main objective of the Central Bank's monetary policy is to support a lower and stable rate of inflation," Ignatyev told the State Duma.

"The Central Bank supports the government's efforts to ensure balanced economic growth … to the extent that it does not contradict the [Central Bank's] main goal."

The Central Bank is expected to take a more "dovish", or expansionary, course when Elvira Nabiullina, Putin's economic adviser, takes over next week.

Siluanov's support for a weaker ruble runs counter to the Central Bank's push to complete a transition to making inflation its main policy target in place of managing the exchange rate.

The Bank of Russia's unsuccessful defense of the ruble in the financial crash of 2008 cost $200 billion in reserves and plunged the economy into a slump the following year. A more freely floating currency acts as an economic shock absorber.

Siluanov said Tuesday that he would welcome a weakening of the ruble rate as long as it was market driven, saying it would boost exports and the budget.

With economic growth weak at just 1.6 percent in the first quarter of this year, Siluanov is finding it hard to afford Putin's spending promises while sticking to a fiscal rule that caps new borrowing at 1 percent of gross domestic product.

A weaker ruble would offer a way out by magnifying the effect of dollar-denominated oil export revenues. It would also run the risk of stoking inflation, which at 7.4 percent already exceeds the Central Bank's 5-6 percent target range.

The Finance Ministry has announced changes to the way it manages windfall energy revenues that it intends to save in its fiscal Reserve Fund that would avoid the unintended outcome of draining rubles from the market and increasing borrowing costs.

Ignatyev said the new mechanism, to be introduced later this year, should not have any net impact on the ruble's value and dismissed the idea that it was cover for a stealthy devaluation.

"I assure you that this [new] order will have virtually no effect on the trajectory of the ruble's exchange rate," Ignatyev said. The ruble has fallen by 1.5 percent this week.

Currently, the Finance Ministry converts some oil revenues into rubles that are later deposited in the ministry's budget Reserve Fund and the National Welfare Fund, worth a combined 5.4 trillion rubles ($170 billion) and held at the central bank.

When the Finance Ministry has excess cash on hand, it often deposits it with banks. This in turn forces the Central Bank to conduct "sterilization" operations to mop up excess liquidity in the financial system.

Such operations would in future be "unnecessary", Siluanov told reporters in St. Petersburg on Wednesday, clarifying how the proposed change in the way funds are transferred would work.

"The Finance Ministry's proposal foresees that the Bank of Russia would take some of the oil and gas revenues earmarked for the Reserve Fund, buy foreign exchange and transfer it to the state treasury," Siluanov explained further.

"In this way there will be no sterilization effect, while there will also be greater liquidity in the economy".

Siluanov estimated that 150 to 200 billion rubles would be transferred to the Reserve Fund at the end of the year.

The ruble's weakness is also exacerbated by persistent capital outflows. Heavy capital outflows from Russia — $56.8 billion last year — have been a worry in recent years, suggesting that a poor business climate is deterring badly needed investment.

"I paid more attention to this problem recently than to macroeconomics and monetary policy," Ignatyev told Duma.