MISOV, Czech Republic — A former secret Soviet nuclear warhead shelter in the Czech Republic is being turned into a museum inviting visitors to learn about the Cold War atomic race.

The mighty underground cement bunker was ordered by the Soviet leadership under Nikita Khrushchev and built in the mid to late 1960s in a forest near the village of Misov southwest of Prague, 60 kilometers from the west German border.

It was one of three such places in the former Czechoslovakia, and a dozen across Soviet Warsaw Pact allies, but the only one believed still to be intact.

"This was the most secret place in Czechoslovakia. No Czechs had access there," said Vaclav Vitovec, head of the Iron Curtain Foundation that is preparing to open the site in August.

Inside the bunker, buried under a forest and protected by machine-gun posts, there are thick concrete walls, two pairs of heavy iron gates and four chambers for storing up to 80 nuclear warheads that could be mounted on missiles. A twin bunker sits some 100 meters away.

A succession of smaller rooms hosts the remains of equipment, from loading cranes to helium and vacuum pumps used to maintain the warheads, a diesel engine, gas masks, air filters and various tools. 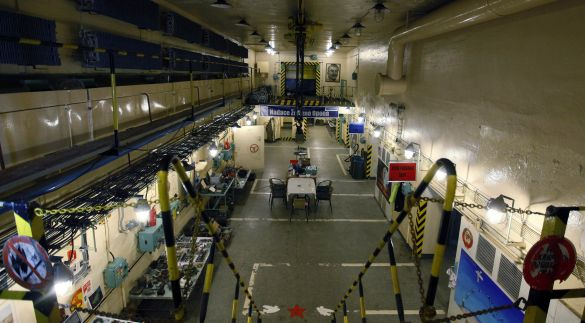 A view of the interior of the former Soviet bunker. (Petr Josek / Reuters)

All of this will be on display along with pictures and texts on the arms race between the U.S. and the Soviet Union.

Historians say the site was so secret that it is not even known whether nuclear warheads were actually ever placed there.

"The is no information anyone from the Czechoslovak side was ever there. And the Soviet side is silent. We do not have information that would confirm it," said Prokop Tomek, a historian at the Military History Institute. But "it was without doubt built for this purpose."

Short- to medium-range missiles that could carry nuclear warheads were deployed in Czechoslovakia and some even provided to the Czechoslovak army.

The warheads could be mounted on the rockets and fired within two hours to clear the path for the Czechoslovak army marching to Germany, as set in Cold War plans. 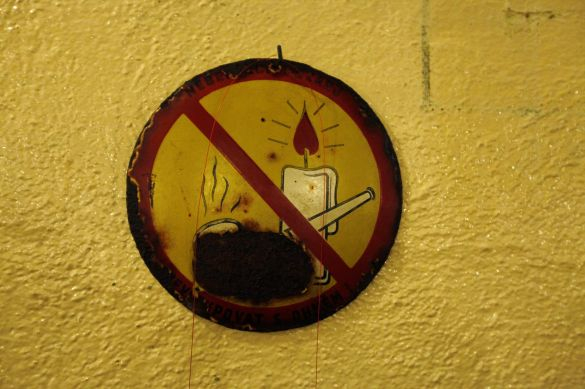 A sign banning open fires and smoking is on display at the former bunker. (Petr Josek / Reuters)

The Iron Curtain Foundation leaders citing former Czechoslovak and Soviet generals, are convinced the depots were used. They say tools and equipment found on the site also indicate the facility was in operation. A 170-member Soviet unit under direct command from Moscow was deployed there permanently.

Soviet forces that invaded Czechoslovakia in 1968 pulled out after the fall of communism in 1990-91, including special units deployed at the three nuclear depots.

Since then, the Misov bunker was used for storing tons of Czechoslovak banknotes which were pulled out of circulation when the country broke up in 1992, and as a storage place for the remains of 4,000 World War II German soldiers.