Social media may have come of age as a means of communication but its role within legal circles is also growing.

Surveys suggest that LinkedIn, Odnoklassniki, Vkontakte or Moi Mir might  help identify connections between people that may not be apparent from official records.  Blogs are used to source expert opinion or quick reaction to news, sometimes faster than  the professional news media.

But lawyers are cautious in suggesting that  blogs or other media forums can provide information of use in the legal process. Michael Malloy, counsel and head of Intellectual Property and Technology Practice in Russia, at DLA Piper, said social media had its place in gaining general information, but it was unlikely to be used to support litigation.

"Some might use this, but social media is not a credible source to be directly used for due diligence or evidence in litigation. We do, however, use a wide variety of 'soft' sources for general orientation on issues, but we would not rely upon social media as a primary source."

Everything depends on the actual circumstances and the source of information, said Andrey Goltsblat, managing partner of Goltsblat BLP.  "On many occasions we have seen social media operating as the fastest and most reliable communication channel. So it would be wrong to say that it cannot function as an auxiliary source of information. Using social network information as proof of any actual circumstances is, in fact, practiced in court.  However, it should be noted that in this case a publication should be notarized.  Only then can it be used as judicial evidence."

A study in the United States published in April by Greentarget, InsideCounsel and Zeughauser Group, found that two thirds of in-house counsel used LinkedIn, and three quarters of counsel monitored blogs and social media.

The reading of blogs and comments could influence hiring decisions, according to 53 percent of lawyers surveyed.

Blogs were more highly rated when they were distributed as part of professional information repositories and aggregators such as JD Supra, Lexology and Mondaq. When presented in this format, 35 percent of lawyers considered blogs to be a credible source. 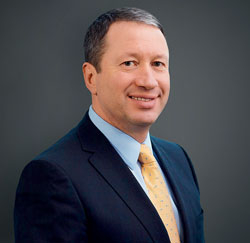 Andrey Goltsblat
"On many occasions we have seen social media operating as
the fastest and most reliable communication channel."


Blogs may also provide outlets for professional journalists, business people or political figures who are marginalized from writing in the state owned media.

"The prime example," said Goltsblat, "is last year's political meetings when detainees were cut off from the public. And for a number of days journalists, bloggers and certain politicians made news for the Russian media from their Twitter and Facebook accounts."

The same can be said about news events, whether floods and tornadoes in the USA. Bloggers affected by the tragedy are already telling their story by the time the media helicopters arrive.

As for research, social media is more likely to be the starting point, or be used to substantiate news reports in newspapers or broadcast media. "Social media is not a credible, primary source for information but it can be useful as an informal starting point in some types of research," Malloy said. "We would expect the verification or clarification process to actually work in the opposite direction: we might get a start from something we see on social media but then turn to more credible and reliable professional media sources to learn more."

Blogs, forums and other types of sources are considered to be only as good as their source, particularly if the blogger is a respected expert in a particular area.

Networking sites like  Odnoklassniki or Vkontakte can even help to establish links between individuals that may not be evident from other published sources, according to Goltsblat: "It is important to understand that in this case a specific account will have to be proven to belong to the individual in question. Furthermore, it is possible that the authenticity of any account would have to be acknowledged by the individual himself, in which case the connection between people, if there is any, can be proven."

Wikipedia is an informal online database, but according to the survey, two thirds of counsel use it, if only to research their peers.

At first glance, the issue of client confidentiality might suggest lawyers make less use of networks, or restrict their use to personal interest rather than professional comment. "Since lawyers work with sensitive information and confidential client relationships, specific information and cases are not shared," said Malloy. "That said, though, there are some instances where discussions of legal issues in a broader legal context are discussed."

Confidentiality apart, lawyers seem to be active networkers, said Goltsblat: "Given the specific nature of work undertaken by law firms, the number of lawyers in social networks is smaller than, for example, that of bankers, brokers or consultants.  Some Russian lawyers are active social networkers. These also include several GBLP lawyers. Lawyers create communities on Facebook and LinkedIn including professional social networks such as Lawfirm.ru and  Zakon.ru, where topical issues and news of the legal field are discussed."


Nina Anigbogu, Marketing Manager at Pepeliaev Group, said: "We have a good number of lawyers who are users and we target the B2B and B2C market in terms of our company and the organizations of which we are members (for example, TerraLex and Taxand). Facebook and Twitter target to a larger extent the individual clients, people who are interested in finding out what Pepeliaev Group is about. We also have lawyers from other firms who have worked with us on projects. LinkedIn is more for B2B.

"We concentrate on the main social media platforms in terms of our own communications, but we do closely monitor other platforms for interactions between lawyers."