In Russia, Arnold Schwarzenegger's most recent film characters speak with the voice of an unlikely artist.

For starters, the voice belongs to the same man who dubbed a mouse in a Disney cartoon.

Also, he is about half of Schwarzenegger's age.

Yet the finger landed on Sergei Chikhachyov to dub Schwarzenegger when the movie star returned to a Hollywood career with starring roles in both "The Last Stand" and "The Expendables 2."

Chikhachyov said it's the aptitude to match the image on the screen, rather than age or previous experience that matters.

"OK, how old is Saruman and Gandalf?" Chikhachyov said. "They are more than 2,000 years old, but they were dubbed by artists that were obviously younger. So what?"

Despite this, there's at least one similarity between the U.S. celebrity and the Russian voice artist: They both have impressively burly physiques.

A journalist by training, Chikhachyov said he was honored by the chance to become the voice of the actor, who he still remembers seeing as a boy in the old movies like "Commando" in the late 1980s when video tape players began appearing in the Soviet Union.

"I remember him from my first video cassettes that ended up worn out," he said. "He is big and strong and fun, and he is not afraid of doing the things that he does." 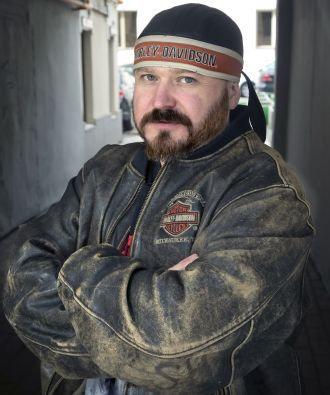 Chikhachyov won the job after a casting at the dubbing studio Pifagor, and approval by the distributor of the films, Universal Pictures International Russia.

It took him about four hours to complete the Russian recording of Schwarzenegger's lines in the 2013 film "The Last Stand," in which the actor held a titular role. Dubbing Schwarzenegger is a relatively easy task, Chikhachyov said.

"There is nothing unexpected in terms of body language," he said. "He is open and forthright. It's easy to read his emotions."

In providing the voice of Arnold Schwarzenegger, Sergei Chikhachyov has etched his name into Russia's  film lore.

Chikhachyov received permission to watch "The Last Stand" once before he set about dubbing the role, a rare opportunity in a world where film distributors reduce pre-big-screen exposure to a minimum out of fear of theft.

He didn't have that chance with "The Expendables 2."

"The most you can count on in terms of preparation for the job as a voice artist is to watch the movie before you take your stand behind a microphone," he said. "In 90 percent of cases, you play it at first sight."

He began moonlighting as a voice artist toward the end of the 1990s, apparently because his work on television brought him to the attention of the dubbing industry. His first job in the business was to dub several phrases by Nutsy, a vulture in the 1973 Disney animated film "Robin Hood." He later was the voice of Timothy Mouse in the old Disney film "Dumbo."

About the same time, he also took on dubbing video game characters. One of his most prominent impersonations was Captain John "Soap" MacTavish in the "Call of Duty" franchise.

Film and video game dubs are now his main area of activity, following his quitting from television.

Rossia channel wrapped up its program about filmmaking, Cinemania, where he was chief editor, in December 2008.

Chikhachyov said he was unwilling to accept any further proposals to work on television because it came to be under too much government influence.

"It affects creative work," he said. "It had been for a long time that I didn't feel like working on the sort of television that we have."

Chikhachyov, 39, is an avid bike rider. His two-wheeler beast is a Honda Fury, a cruiser motorcycle of the chopper class.

Decked out in a black T-shirt emblazoned with a huge skull, a brown leather jacket that looks age-worn, and a black bandana, Chikhachyov looks like a classic biker. He is not a member of any biker groups, but follows a code that binds motorcyclists to help each other in road accidents.

He has a liking for other motor-related items, like trucks, having driven in his capacity as a reporter, he drove a Chinese tractor truck from Blagoveshchensk, on China's border, to Chelyabinsk in the Ural mountains as part of a job to deliver it to its buyer.

Chikhachyov has also hurled himself in the middle of the country's political history.

After the interview, he went to join a 30,000 strong rally, challenging President Vladimir Putin's policies: An event that is part of a series of major protests, which began in December 2011.

He also was at last year's May rally, which ended in scuffles with the police, as the overflowing law enforcement forces effectively blocked an authorized march over the Bolshoi Kamenny Bridge.

"I had a feeling the police were expecting a Guderian army. There were so many armored vehicles, heavy trucks and personnel," he joked, referring to the general, who commanded Nazi Germany's tank armies. "If the marchers had, say, a regiment of tanks, it would still have been quite difficult for them to move across that bridge."

An Apricot Cake for All Seasons

Try this delicious mix of cake-baking traditions filled with the fruit of the season.
the mt list

Options this week are limited by coronavirus restrictions, but art, books, and movies are still on!
clothes make the man

The Putin-Biden Summit: What the Suits Said

Everything at this summit told a story - even the clothes on the presidents' backs.
everyday ecology