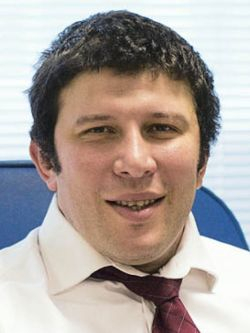 The world so far looks somewhat similar to last year. Most factors affecting the business environment and financial markets are similar to last year's. Global economic growth projection is slightly higher, at 2.4 percent in 2013 versus 2.25 percent in 2012 according to the Bloomberg consensus (the IMF projection is slightly higher). Growth of developed markets is expected at 1.5 percent, and emerging markets are expected to grow 5.6 percent in 2013. Most of the growth is expected to be delivered by the BRICS, with Brazil, China, India and South Africa all expected to show better GDP growth numbers in 2013 vs. 2012 according to Bloomberg's estimation. Also, a pickup of growth is expected in Turkey and South Korea, while Russia's projected growth is slightly lagging last year's numbers, with 3.3 percent. Europe is still considered quite weak, but on Bloomberg consensus the growth turns to positive 0.3 percent growth in 2013 versus 0.2 percent decline in 2012.

Despite the fact that Russia's growth is expected to be slightly slower in 2013, its backdrop of inputs going into 2013 looks very interesting. Russia has crossed out lots of goals that were on its list of things to do ever since the transition started in the 90s. Russia is now a member of the WTO. It has improved its demographics. It has launched a central depository. It has adopted the counter oil price budget rule; it has moved to pay minorities higher dividends; and it is on the way to finish the privatization that it started in the 90s … and it is also fighting corruption, with some very loud cases launched in 2013.

There is also a high degree of stability, including political stability, as the election period is over and the protests are much quieter.

Russia is now very close to the Olympics, and is about to normalize its relationship with Georgia, which was quite painful in the recent past.

The international perception of Russia, however, doesn't praise any of these achievements, and is instead focused on the reaction by the media and bloggers to the punk band Pussy Riot's sentence and to the anti-Magnitsky law, both of which are the subject of very loud public debate in Western media and the blogosphere. The discussions touches on the problems raised by Russian literary classics such as Leo Tolstoy in "Resurrection," where a fallen woman is praised, and Fyodor Dostoevsky in "Brothers Karamazov" and "Crime and Punishment," which doubts the happiness and the sacrifices of one child's life.

The stability that has been achieved is also frequently taken quite negatively and is compared to the times of "zastoi" under Brezhnev. Without highlighting the positives that there is now firm knowledge that the oil price can be volatile and could fall, and monetary and fiscal mechanisms are in place, i.e. the budget rule and floating ruble that are supposed to create immunity for Russia if the oil price is volatile. E.g. if the oil price will fall to 70$/bbl, the budget deficit will only total 4 percent and can easily be financed by borrowing.

Mechanisms to protect the budget and budget revenues are now in place in case the oil price falls. The final test of stability for Russia is to test Russian consumption levels when the oil price is weak. Consumption fueled by public spending and high oil revenues has been the major driver of Russian growth in the past 10 years. But the last time the oil price plunged to $40, levels of consumption in Russia collapsed, highlighting Russia's dependence on oil.

There is hope that overall huge consumption levels in Russia (Russia consumes almost $1 trillion worth of products ) will stimulate much desired investment and import substitution, and domestic manufacturing will speed up. Some of this is already taking place.

It's true, however, that even the consumption model has the positive effect of developing a retail sector, building supermarkets, etc., as well as energizing the services sector, as it remains protected by barriers in Russia, and it's really impossible to import service.

So far, the oil sector is the mirror image of the consumption sector and vice versa. The situation in the oil sector is quite tense, since Russian-proved reserves of oil will be exhausted by 2032 according to the current levels of proven oil reserves that are reported by Russian oil companies. A good example is the rapid fall in production of a key Soviet oil field, Samotlor, which produced over 2 billion tons of crude over its 40 year history of production.

But these are only the official numbers, as companies are slow to classify more of their reserves as proven and have mostly previously concentrated on their existing fields rather than invested into greenfield. There are now more and more greenfield projects and the government is trying to stimulate greenfield development with tax breaks. Companies are operating at reserve replacement rates that help to extend the lives of reserves. Even TNK-BP, which operated Samotlor, was able to show reserve replacement levels offsetting the 30 percent declines in Samotlor production.

The strikingly low headline reserves figures of Russian oil companies, which bar only a small lifetime of reserves, highlight the fact that, most likely, the future of Russia's success will have to depend on the presence of a large manufacturing sector and Russian membership in the WTO can help cross any barriers for Russian producers in global markets.

Adding to the concerns about the oil sector, there is also some lack of confidence in the current oil price levels as Iraq's production comes online following 10 years of blackout. So far, the situation concerning Syria and Iran, including the embargo on Iranian oil, was a factor supporting the oil price. But the oil price seems to be at risk once the situation in Iran and Syrian clear off and new fields come online in Kurdistan, or the U.S. turns into an oil exporter rather than importer, or technological GTL techniques help convert natural gas into diesel.

The domestic gas sector looks set for transformation. Previously, it was all between Gazprom and Novatek, as companies strived to compete on internal markets and Novatek strived for the possibility of exports. But following the deal with TNK-BP, Rosneft has become the third strongest domestic player. The structure of the gas business in Russia, with three strong domestic players, can change the sector significantly and push for the reform of Gazprom. This event can be a value driver for the monopoly that has been losing investor's confidence. Gazprom's spin-off of transportation assets and the possibility of exports by the independents can become a value driver for the entire sector.

Still, the strategies for Russia's ambition in the oil and gas sector were all developed in the 60s by Alexey Kosygin et al. and send Russia in a very specific direction of development, turning an otherwise industrial country into an oil exporter like Iran or Saudi Arabia or Kuwait.

The hope is now that sectors associated with consumption that are still the mirror image of the energy sector in Russia will get enough power to become self-sufficient and will help to write a new chapter in Russian economic epic. Perhaps this will require some investment by public development institutions, but perhaps some crowed funding effort as well. Actually Leo Tolstoy who despised all sorts of taxation as a form of financing for public projects thought that all things can be financed by means crowd funding directly.