Olga Pleshakova, CEO of Transaero Airlines, leaned back at her desk and laughed when asked whether her childhood dream had been to run an airline.

"No, no! As a child, I wanted to become a history teacher," Pleshakova said in an interview.

Favorite book: I have many, each chosen during a different period of my life.
Reading now: "The Kite Runner" (2003) by Khaled Hosseini
Movie pick: Anything with Meryl Streep
Favorite Moscow restaurant: Beefbar Junior, 2/1 Kutuzovsky Prospekt (inside Radisson Royal Hotel Moscow)
Weekend getaway destination: Venice and Paris

But those plans went by the wayside when she started dating her future husband, Alexander Pleshakov, as a high school student in the 1980s. He was already studying at the Moscow Aviation Institute and persuaded her to join him there, saying, "History is boring and all about the past but airplanes are the future," Pleshakova said.

Her husband created Transaero as a private competitor to Aeroflot, and on Nov. 5, 1991, it became the Soviet Union's first private airline when it made its first flight from Moscow to Tel Aviv, Israel, with its own airline code, UN. Since joining Transaero in 1992 and rising to the rank of CEO, Pleshakova has seen the airline achieve many more Russian firsts, including:

But even more than acting as a trailblazer, Pleshakova said the secret to the airline's success lies in the fact that the business is all in the family. While she runs operations as CEO, her husband serves as chairman of the board. And theirs is not the only familial relationship within the airline. Fathers and sons work as pilots and maintenance staff. Mothers and daughters take care of the accounting.

"I know that other airlines don't hire relatives, and some even forbid it," Pleshakova said. "But we've always supported family. A family takes the welfare of each of its members very seriously, and when father Yurchik brings his recently graduated son to work at Transaero, you can be sure that he is seeking the very best for him."

She said all employees, irrespective of whether they have relatives at Transaero, must clear a tough screening process before being offered a job. But she also said that she sought to maintain a friendly atmosphere in the workplace, and family members who work together tend to help meet that goal.

How many of Transaero's 10,500 employees are related to one another is unclear. Pleshakova said the airline has never counted.

The dedication to family ties appears to be paying off. Transaero is the country's second-largest airline, after Aeroflot, in terms of passengers. It flew the same number of people in the first week of August — 300,000 — that it carried in all of 1992, the first year of its existence.

Pleshakova, 45, sat down with The Moscow Times in her office, located on the second floor of a building tucked in a courtyard behind Transaero's one-story headquarters in central Moscow, to share her thoughts on how a crisis can strengthen a company, why foreign investors should practice respect and excellence, and why the fight against corruption starts with your individual interaction with the traffic police.

While Pleshakova cherishes the family atmosphere at Transaero, she is not convinced that her two daughters should follow in her footsteps. Her elder daughter, Tatyana, already works as deputy head of the airline's tour operator, Transaero Tour Center, while the other, Natalya, is studying in high school.

"I would be happy if they decided to work at Transaero," Pleshakova said. "I know it's not easy to work in an airline, so I have conflicting feelings. But I'll accept their decision."

Q:  Could you describe a problem you have resolved and what you learned from it?

A: The most difficult time for us was without a doubt Russia's 1998 financial crisis. But the knowledge that we gained from that period has been priceless, and it has helped us run the airline in subsequent years.

To do that, we honored the tickets of passengers who had made reservations, even when the money they had paid before the crisis ended up worthless. We essentially carried those passengers for free. We determined to never leave a passenger stranded. We also managed to preserve our core team of pilots and mechanics, the valued employees who have kept our air-safety record spotless.

Then, in the early 2000s, the second intifada erupted between the Israelis and the Palestinians. Israel all but closed its airspace. But in keeping with the promise that we made after the 1998 crisis, we decided to honor passengers' tickets. Transaero was the only foreign airline that didn't suspend flights because of the conflict. We had to call the Russian Defense Ministry every day to find out whether we had permission to fly. Russia was the only state that received the airspace updates from Israel daily because we were the only airline flying daily to that country.

The experience prepared us for the future conflicts in Egypt and Tunisia. We have become stronger with every crisis.

Q: How do you deal with corruption and bribery?

A: To be honest, we don't deal with corruption because we don't get involved in it. Transaero has never worked on dishonest terms. The first reason for this is because to do so would violate the philosophy of our business. Second, Transaero has never asked a state agency to bend the rules for us during our 20 years of doing business. Every proposal and issue that we have raised has been handled within the boundaries of the law.

On a more personal level, I tend to be quite a bore when it comes to corruption. I always used to ask traffic police officers for a receipt when they collected a cash fine. Of course, now we pay fines at the bank, so we no longer need receipts. But the issue still remains with paid parking. Whenever I pull out of a parking spot, I ask the parking attendant for a receipt. Otherwise he could put the 150 rubles in his own pocket.

This desire for receipts is my "unhealthy habit." But you know, I have always believed that you have to start fighting corruption with yourself. Before you go out and lecture others about how the country is rife with corruption, you should start changing things with your own actions.

Corruption is not only a problem in Russia. At Transaero, we have received offers in many countries. But we have resolved to abide by the law in every country. If a state agency ultimately refuses to abide by the law, you can always turn to the courts. Transaero has gone to court in the past, and we were able to resolve our problems there. 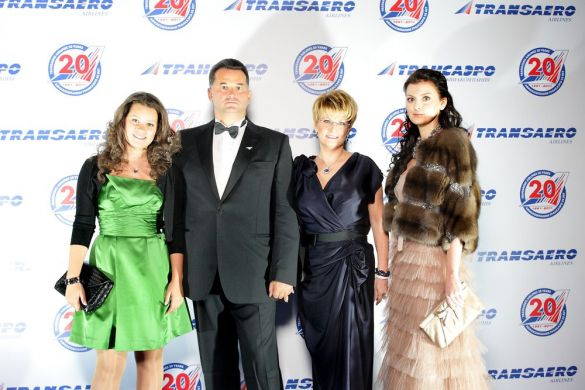 A family portrait: Olga Pleshakova with her husband, Alexander, and daughters Natalya and Tatyana in 2011.

Q: Who or what inspires you?

A: Of course Transaero itself inspires me. We have accomplished so many firsts, and this gives me joy. But most of all, the passengers make me happy. Even when they complain they make me happy because they show me that we have room to improve. They challenge me to find ways of doing things better.

Q: What advice would you offer to foreign investors who want to enter or expand in Russia?

A: As a Russian airline with many foreign partners, I can say right away that it is important for every foreign company that comes to Russia to have a strategy that is well-thought-out. Then, when you have formulated a concrete course of action, it's important to arrive here with a sense of respect for the country, for your clients, and for the citizens of the country, most of whom are respectable, honest people.

In addition, Russia loves and values excellence, a fact that I think is known around the world.

So you need to come here with a philosophy of respect and excellence in order to be successful. If you come with any other approach, you are not going to succeed.

We once had a foreign partner who acted rather aggressively and failed to provide excellence for the money. The partnership did not last. Companies like this might seem to do well in the short run, but they will not last in the long term.

You have to be able to offer two qualities: respect and excellence. That is Transaero's motto.

Russians Now Must Travel to Warsaw for U.S. Immigrant Visas

The U.S. says Moscow's limit on the number of diplomatic staff it can keep in Russia has hindered its ability to issue visas.
russia's response

Record deaths. Cases climbing. Partial lockdowns.
out in the cold

Gazprom Could Cut Gas to Moldova if Contract Not Signed

Sputnik V's developer has said it would produce information to show that South Africa's concerns were "completely unfounded."