Contribute Today
By Jonathan Earle
May 21, 2012 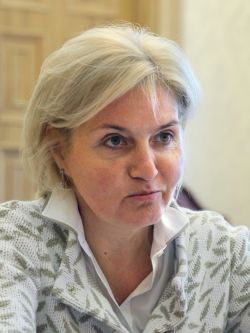 The highest-ranking woman in the new government spent eight years working for billionaire former presidential candidate Mikhail Prokhorov, sparking speculation — in lieu of his absence — that she might be his "representative" in the government.

Labor economist Olga Golodets, who will focus on social issues as one of seven deputy prime ministers in Dmitry Medvedev's new government, ran human resources at Norilsk Nickel from 1999 to 2008, when Prokhorov owned a stake in the company.

A source told Vedomosti that she could be seen as Prokhorov's representative in the new government, but sources close to Prokhorov said the links between the two shouldn't be exaggerated.

"It's very primitive to think about people in terms of who they 'belong' to," said Alexander Lyubimov, head of RBC TV, which Prokhorov owns. "I know her as a strong manager, independent from Prokhorov."

There was speculation after Prokhorov's strong finish in the March presidential election, which was driven by support from the opposition-minded middle class, that he might receive a seat in the new government.

Last week, Vedomosti reported that Prokhorov and Sergei Kiriyenko, head of Rosatom, had turned down offers to join the government, a claim that Prime Minister Dmitry Medvedev's spokeswoman denied.

Georgy Bovt, who co-chaired the Right Cause party, which Prokhorov briefly led last summer, said he wasn't surprised that Prokhorov didn't become a member of the new government.

"Prokhorov doesn't have a good enough relationship with Medvedev to go work under him," he said. "He doesn't have any interests that he can't lobby for himself."

Golodets' experience in social issues includes 13 years as a researcher with the National Labor Research Institute and the National Academy of Sciences' Institute for Employment Studies.

As deputy mayor beginning in December 2010, she oversaw education and health care in the city.

"I don't see any problems with her appointment. She's very energetic, very smart, full of initiative," said a high-ranking official at a Moscow university, who spoke on condition of anonymity. "But I wouldn't say that she's terribly well-versed in education. She's not a career educator."

"She has her team and she promotes that team," the official said, pointing to Golodets' associate in City Hall, Veniamin Kaganov, whom he characterized as a reformer.

Lyubimov and Bovt praised Golodets as a strong manager, a quality that her official biography emphasizes. In 2007, she was named best HR manager by the Russian Association of Managers.