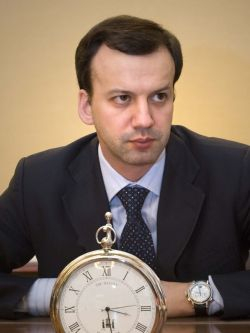 Diminutive economist Arkady Dvorkovich was one of the few officials to publicly criticize Vladimir Putin's decision to return to the presidency last September, and his appointment as a deputy prime minister adds a strong liberal voice to the new Cabinet.

With a prodigious memory for economic statistics, which he attributes to his chess-playing ability, native Muscovite Dvorkovich is widely seen as politically and ideologically close to Prime Minister Dmitry Medvedev.

The graduate of Moscow State University and Duke University in North Carolina served under Vladimir Putin as an adviser during his second term in the Kremlin but was a loyal aide to Medvedev between 2008 and 2012.

When Medvedev announced last year that he would not run for the presidency and had stood aside to let Putin return to the job, Dvorkovich, 40, wrote on Twitter that the news was "not a reason for celebration."

The new deputy prime minister also worked under German Gref, now president of state-owned financial giant Sberbank, when Gref was director of the Center for Strategic Development and subsequently made economic development minister in 2000.

As an aide to Medvedev, Dvorkovich has been closely associated with two of the then-president's most strident efforts to reduce the state's presence in the economy: the push to remove Cabinet ministers from the boards of state companies and attempts to expand the scope of privatization.

His position has brought him into conflict with other political factions in the Kremlin.

Last month he dismissed the suggestion, voiced by then-Deputy Prime Minister Igor Sechin, that the sale of stakes in state-owned companies could be postponed. "Everything has already been announced," he said when asked about Sechin's proposal on April 4. "We are not interested in the positions of separate members of the government."

Sechin stepped down from his position on the boards of state-controlled Rosneft, Rosneftegaz and InterRAO after Dvorkovich announced the list of ministers targeted by Medvedev's decision last year.

No longer a member of the government, however, Sechin is set to return to Rosneftegaz on Putin's orders.

An active user of the microblogging site Twitter, Dvorkovich has enjoyed a high profile as a mouthpiece for Medvedev on economic issues. Outside politics, however, the son of a famous chess judge is the head of the supervisory council of Russia's Chess Federation.

Dvorkovich told The Moscow Times earlier this month that chess had helped him succeed in politics. While Medvedev values the game as an indicator of competence, it was not among the "official criteria" for appointment to a government position, Dvorkovich said.