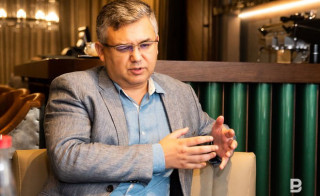 President Vladimir Putin has exhausted his political agenda. Even his recent referendum to “reset” the political clock hasn’t helped. Putin might physically remain in power for some time, but he has already become a “lame duck” president in the eyes of many people, a leader on his way out the door. Nobody — not even loyalists — has any hope that the country will improve while Putin remains in office.

The only real questions now are, When will all of this end? and Who will be the next president? In Russia, the prime minister is traditionally the first in line as successor, which is why the appointment of Mikhail Mishustin to that post was one of the most important political events of the year.

Although Putin can now legally run for re-election in 2024, he might opt to step down and name a successor instead. After witnessing how Belarusian President Alexander Lukashenko’s attempt to remain in sparked widespread unrest this year, Putin knows the same thing might happen here. The Russian people are getting tired of him.

His trust rating has dipped below 50%, meaning that more than one-half of the population does not want to vote for him. Although short-term bursts of popularity are theoretically possible still, long-term growth is unlikely. The president’s electoral base will continue to dwindle. As someone averse to risk, Putin might prefer to cede some of his power to a successor rather than risk everything as Lukashenko did.

According to recent Levada Center polls, Putin’s and Mishustin’s approval ratings have risen and fallen in inverse proportion to each other. Putin’s rating rose from July to September from 66% to 69%, while Mishustin’s fell from 60% to 57%. But from September to November, Putin’s dropped from 69% to 65% while Mishustin’s reversed course and rose. True, it was only a 1% gain, which is well within the margin of error, and yet it might be telling.

In the closing years of former President Boris Yeltsin’s rule, every prime minister he appointed —Yevgeny Primakov, Sergei Stepashin and Putin himself — enjoyed an automatic spike in popularity. At that time, public opinion looked favorably on anyone who could potentially replace the unpopular Yeltsin. The current swings in the Putin-Mishustin numbers might indicate that the latter is seen not only as a complement to the National Leader, but increasingly as his possible successor.

All this gives added importance to the November reshuffling of government ministers in favor of those loyal not so much to Putin, as to Mishustin himself. This indicates that Putin might be not only seriously considering handing over power, but has perhaps already decided to do so.

Changes in Russia’s political parties take on particular importance in the run-up to State Duma elections. There are two main trends here. The first is the radicalization of the lower echelon of the Communist Party, the country’s second largest party. This puts pressure on the party leadership to take increasingly untenable positions against the ruling regime. And this is why the Communist Party first voted against Putin’s “reset” referendum, then put forward alternative constitutional amendments and organized an alternative referendum. Their most recent initiative is to train one million observers to prevent the authorities from falsifying votes in the Duma elections.

The second trend is the emergence of the strong right-wing party called New People that has proven itself capable of winning elections. By allowing the right-wing party to register and participate in the latest election campaign, the Kremlin has shown that it wants to stop the erosion of its social base.

Putin clearly doesn’t want the right-wing electorate to become radicalized and understands that giving it political representation is the only way to avoid that. It is important to note that New People chalked up victories in the September regional elections without the help of those in power, and in some cases, such as in Voronezh, despite their efforts to thwart it.

That gives reason to believe that the new right-wingers will bring a strong hand to any talks with the Kremlin and enjoy about as much freedom as the Communist Party now does. They will not have to walk on tiptoe like such parties as A Just Russia and For Truth do.

New People will not be manning any barricades, of course, but as history shows, that frightening prospect alone often prompts the authorities to enter into dialogue with the systemic opposition which, consequently, can turn out to be the main initiator of a democratic transformation.

The return of Alexey Navalny

Beyond the Kremlin’s hand-picked political landscape, the year’s main events unquestionably concern Alexey Navalny. The poisoning strengthened his position significantly. Actually, the fact that he survived and went on to expose and then humiliate his would-be assassins gives him a powerful upper hand. The ability to face and conquer death is an archetypal attribute of a true leader. This is an irrational sort of strength, one that cannot be diminished by Kremlin claims that Navalny has ties to the CIA or other appeals to “reason.”

Navalny’s return to Russia could play a decisive role in the current situation. The closer to the start of the Duma election campaign, the greater the effect it will have. Political tensions will be high then, and the arrival of the main opposition leader might act as a detonator, much as Lenin’s return did in April 1917.

Moscow to Target Apolitical Youth on TikTok in 2021 Race – Meduza

Given the current protest mood in the country, the Kremlin has nothing with which to combat Navalny’s “smart voting” except administrative resources and pressure tactics by the siloviki. It is, therefore, possible that the authorities will simply arrest Navalny upon his return, although they surely realize that protests will inevitably break out and would serve as a very undesirable backdrop to the election campaign.

The most important event of the outgoing year is the unexpectedly ardent and enduring protests by Khabarovsk residents. Those demonstrations have made it impossible for the Kremlin to claim that only Muscovites mobilize en masse for political reasons. What’s more, what happened in Khabarovsk could happen again anywhere else in Russia.

In the run-up to the Duma elections, it is important to keep in mind that the more stable and enduring the ruling regime appears to voters, the more likely Russians will support it at the polls, and vice versa.

In this sense, the current situation favors the opposition. This is about more than just the rising protest mood: it touches on the intangible but highly important “arc of history.” Whereas before, the political winds blew squarely towards the Kremlin while wrecking all dissenters on the rocks of political obscurity, those winds have now reversed. There is a growing and unshakeable feeling that the regime has exhausted itself and that changes are inevitable. The time has come for Kremlin loyalists to exit the political scene — as many are doing now — and for the opposition to return.

Such is the Zeitgeist now. Accordingly, it is safe to say that the opposition will enjoy a strong turnout in the upcoming Duma elections. If the authorities try to block that by refusing to register the strongest opposition candidates, protests will likely erupt. And, unlike the protests that ensued after elections for the Moscow City Duma, these demonstrations might extent well beyond the capital.

A flurry of recent rulings are meant to identify “enemies of the state” for the public, rights defenders say.
lgbt pride

"Let them celebrate. They've shown a certain something about the people who work there," he said with a smile.
RESURGENT PANDEMIC

As Russians Went to the Polls to Extend Putin’s Rule, Yekaterinburg’s Hospitals Were Overflowing