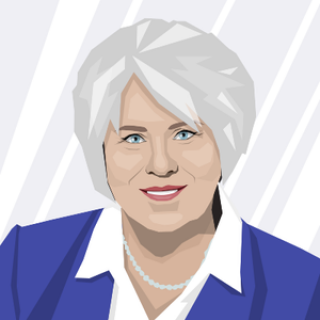 When I arrived as the Ambassador to Russia in 2005, relations between our two countries were not at their best. There was no chance of concluding the border treaty because Russia had withdrawn its signature. But the real problems began in 2007 when the city of Tallinn decided to relocate a Soviet war monument to the Tallinn Military Cemetery.

In Tallinn there were riots, and in Moscow members of the Nashi movement blocked the Estonian Embassy. Estonia was the first country to be subjected to cyberattacks. I was physically attacked. That was the most difficult time – just to keep things running, to represent my country, to do it with dignity, respect and all the while trying to explain the position of my government.

International agreements oblige us to create normal working conditions and protect the safety of diplomats and their families. It was definitely not a normal period, when the embassy couldn’t function normally because Russian authorities could not, or rather did not want to, respect their obligations under international agreements. But that was just one week.

But when official relations with MID and Kremlin were difficult, I felt enormous support from the Russian people.

I am Russian, a fourth-generation Russian living in Estonia. My mother is Russian and I speak Russian with her. So I could communicate with the Russian people in their mother tongue. I had many unforgettable conversations — in the streets, in the Bolshoi Theatre, in the shops. I never ever felt any hostility. On the contrary, even if Russians did not agree with official Estonian positions they would still always say something nice about the Estonian people, culture, cities, or language.

Today as members of the European Union (EU) and NATO, our position with regard to Russia is very much aligned with the other NATO and EU member states. What makes our relationship different is that we are neighbors with Russia.

Our people have been close for centuries. Before our independence, Estonian doctors, military men and lawyers were educated in St. Petersburg and other Russian universities. People don’t hate each other. People visit each other and participate in many citizen and cultural exchanges. This is very important.

We’re neighbors. We’re here geographically and geopolitically — we can’t go anywhere. We would like good cultural, political, and economic relations with Russia. But the key to that today is not in Tallinn. The key to that is in Moscow.

After the military operations in East Ukraine and the annexation of Crimea, the political situation has been difficult. We share a common history with Ukraine and Georgia. Whether we wanted it or not, for 50 years we were in the same union.

We will support Ukraine and Georgia in their efforts to end occupation and restore territorial integrity. We will never recognize occupation of Georgia and Ukraine, the same way as many countries did not recognize occupation of Estonia in 1940. We will not act outside the principles on which our country has been built. Given that, Estonian-Russian, EU-Russian, and NATO-Russian relations can only improve when Russia changes its behavior.

I admire Russian history, culture and people. It’s so unfortunate that they are not uniting for something, they are uniting against something. They are looking for enemies. NATO is an enemy.

When I was ambassador to Russia, for some time Estonia was Russia’s enemy number one. That was not true then and is not true today. It is regrettable that so many Russians believe false information and propaganda. But we will continue telling our story and hope that Russian people will see for themselves the benefits of democracy.

The Narva River is between Russia and Estonia, with Ivangorod on the other side of the river. The people can see the differences in social well-being, shops, prices, and salaries. We can show that with democratic reforms you can achieve much more, and give much more to the people and society.

In the end, it is in our best interests to have good relations with Russia – but with a democratic Russia. We cannot compromise on principles.

*This article is part of The Moscow Times' 25th anniversary special print edition. To view the entire issue click here.